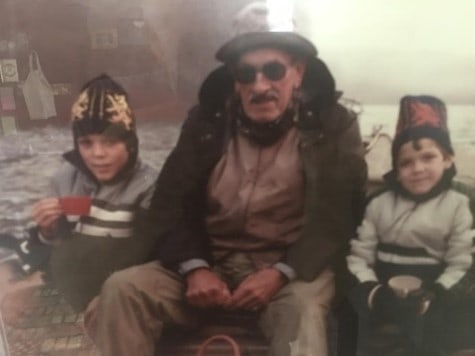 “Padre” Dr. Mark Henry Miller Offers Up Fond Memories of “Killer Keller” As I Him By

Editors Note: I just learned of the passing of famed fishing guide Don Keller, or “Killer Keller” as he was known in our community. Avid angler and miracle fish catcher Mark Miller has some great words for a guy that had a real impact in his life. Read the Padre’s blog post below and if you want to read more, go to his web site HERE.

Truth…not once when I fished with Don Keller did I not put fish in the net.

Started more than 45 years ago.  Memories that neither fade nor get lost.

The picture themes being with Keller.  He cared about my family and invited me and my father and Matthew and Andrew to fish on Keller’s favorite river, the Clackamas.

You can see we are not in shirt-sleeves!  But, to have the 4 of us with Keller on the Clackamas…ah, sweet!

Remember three times with Keller [well, two with Keller and one without!], that made it clear…he was a great guide…and valued friend.

The first time was when I had Andrew join me…it was February…we were casting for winter steelhead.  BAM.  Andrew at first thought he was snagged, as did I.  Keller knew otherwise, “Andrew, you’ve got a fish on.”

Andrew knew the drill of bringing in a fish, lift up and reel down.

This fish, though, was uncooperative.

Finally, I asked Keller to help out.  Truth was I was afraid if I took Andrew’s fishing pole, I might not do it well and the fish would be long gone.  Keller knew what to do.  And.  Surprise beyond definition:  It wasn’t a winter steelhead.  Nope.  It was a 24-pound Spring Chinook [normally caught in April.]  Wow.  Got some pictures…made Andrew a fishing hero with his school.

Then.  Remember it was May of 1981, the year after St. Helens erupted.  I had bragged about great salmon fishing with Keller…to my church members at Broadmoor Church in Colorado Springs.  Three of them took me up on it…do you speak the truth…was the prompter.

So.  Flying in Dick Hanes’ airplane we got to Portland.  Our first trip with Keller was the next afternoon.  Not the morning because he had half-day clients.  Remember we were early—which was my pattern.  No complaints.  Hanes asked for a beer…was 11 a.m.  Perhaps the first time I heard, as he raised his bottle in tribute, “Must be 5 p.m. somewhere.”

Keller came to the boat launch bank just above the Carver Bridge.  Had two clients.  Keller lifted two 20-pound Spring Chinook out of the boat.  My three buddies couldn’t believe it.

We put in the Clackamas, back-trolling plugs.  Now.  I didn’t time it, but no more than 5 minutes below the Carver Bridge Victor Boog’s fishing rod was almost pulled from the boat.  FISH ON!

What an adventure those two days.  With the added treat that Dick took me, my mother and father on a plane ride…up and over St. Helens, down the Columbia, down to Nehalem Bay and back to Portland.

The third time with Keller [cannot even count how many times I fished with him over a 20-year span.] I’ve written about before.

Was in October of 1985.  I thought, not passively, of perhaps becoming a fishing guide.  Since fishing was my self-designated middle-name, why not?

So I fished 5 straight days on Tillamook Bay, October 7-11.  Zilch.  Fished in my father-in-law’s boat, actually barge-like, almost as wide as it was long.

But, not catching fish didn’t zap my fishing hopes.  Simply made it clear…leave guiding to others.

Plus.  A HUGE PLUS.  I knew I wouldn’t return home to Colorado Springs without a Fall Chinook out of Tillamook Bay…because, Saturday was my scheduled day with Keller..

I showed up where he docked his boat…at the Oyster House, south-end of Tillamook Bay.  He looked at me, “Mark, what are you doing here…I’ve got you down for next Saturday.”

Short-hand I was out because he said he had 4 clients due any minute from Portland.  He did offer a caveat, “Well, they don’t all show up, because this is Saturday.  Sometimes one of them drinks too much Friday night.”

Okay.  Confession…I breathed a pray for someone being drunk.

The prayer was invalidated when the 4th showed up.

Went back to my Tilla-Bay Motel Room, sent along with Keller’s apology.

Then realized no one has ever caught a Fall Chinook out of a motel room.

Decided to go back out in the barge, which I renamed African Queen Two.

Listened to my theme then, Billy Joel singing “You’re only Human,” You’re having a hard time lately and you don’t feel so good; you’re getting a bad reputation in your neighborhood.

A passing boat yelled me from my trance, pointing to my fishing rod.  FISH ON!

After a very lengthy battle I, pushing exhaustion, lifted the salmon into the net.

Went immediately to the Garibaldi Marina and weighed the fish.  An office guy put a hat on my head, “Garibaldi Bay Marina—50-pound-class.”

I had to do it.  Got back into the African Queen Two, tracked Keller down, trolled by him and waved my hat.

He stood.  Clapped and said, “See, you ALWAYS have preacher’s luck!”

Ah, Don Keller…so many more times with him.

He was the reel deal [correct spelling on him!]…may he be at peace.  And may he know how many of us learned from him…and found him to be special.