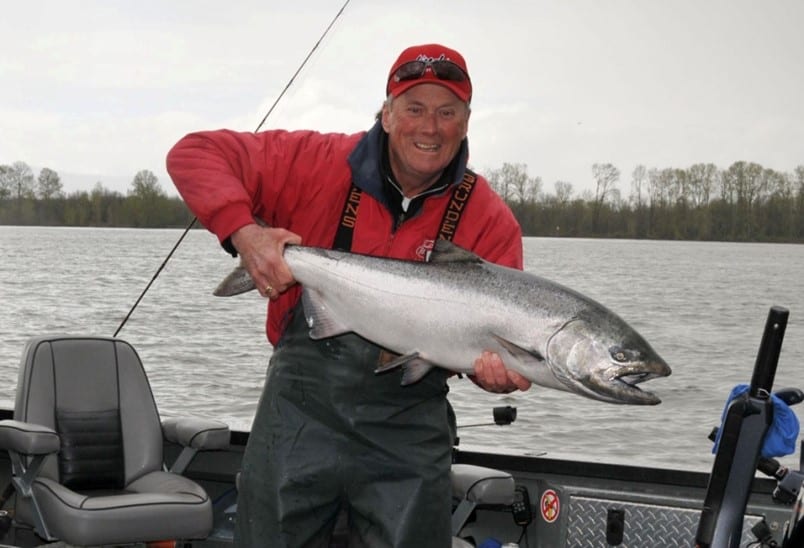 Clackamas River Fishing Report – After reaching “action level” on Saturday, the Clackamas fishing is back on track this weekend, with the likelihood of both spring Chinook and summer steelhead available to both bank and boat anglers. Effort this week was predictably low with the high water event.

The creel program was set to launch, except then this happened (see below). Historically however, spring Chinook fishing is underway on the Clackamas and summer steelhead catches are improving as well.

Although no creel census was taken during the high water event, there may have been a few plunkers working the lower Clackamas in hopes of finding spring chrome. It’s likely however, few anglers were motivated given the recent history of poor returns here, and less that hospitable water conditions. We get to skip right to the forecast.

There’s still a few wild winter steelhead in the upper reaches of the Clackamas, but it’s time to let them do their thing, spawn, that is.

Avid angler Jeff Stoeger reports on the Sandy – What a week we saw on the Sandy last week. The river took a jump up to 13.5 ft and now the river is on the drop. I had a couple of buddies who fished the last couple of days, and they have had some good luck on summers from Oxbow to Cedar creek. There have been a few springers caught in the Oxbow to Dodge Park area and the river is ideal color and height. The forecast is for the river to take another bump over the weekend and climb to about 12ft. That should slowly drop over the next week. Spinners have been the ticket for summer steelhead in size 4 or 5 as well as beads in size 12mm and 14mm. There are some springers in the upper section of the river but most of them are natives. Spinners have been the ticket for entice them to bite. The lower river has produced summers and springers for those who have been fishing from rafts or drift boats.

Willamette River Fishing Report – Catch rates for Willamette River spring Chinook plummeted, as the river rose and blew out, peaking on Monday, May 9th. This section will be brief, we’re sidelined. I fished with about 17 or 18 other boats on Friday, yielding NO bites for a 4.5 hour effort, backtrolling divers and eggs as well as plugs. We saw just a single fish caught for the hours long effort, just above the I-205 bridge in Oregon City.

Turbidity has peaked and should be on a steady drop this week, maybe even getting motivated anglers out prior to the weekend. Anglers should get excited when the turbidity gets closer to 11 on the scale identified above. We have the turbidity table on our home page now HERE.

Steelhead catches weren’t all that flattering, but those are an incidental catch anyway.

Sturgeon catches in the lower river however were once again impressive. Not many people fishing for them (relatively speaking), but they are busy reeling up fish, keepers, shakers and oversize too!

Join us for the 28th Annual Spring Fishing Classic taking place on May 21, 2022 at Camp Withycombe.  Find out more right here.

Columbia River Fishing Report – Fish numbers continue to impress biologists and stakeholders alike on the mainstem Columbia River. Industry officials have been clamoring for a re-opener since before the weekend. Experience shows us that after the first half of the run is over Bonneville Dam, springers get pretty finicky on when they want to strike. Success rates oddly drop after early May, despite the fish still being there. They may just be getting a bit excited to get upstream to meet their mates and likely know hot water is about to hit, further compromising their return to their natal systems.

Fishery managers met Wednesday however, to go over the facts and determine what opportunity may be left on the table for sport anglers to take advantage of. The news is good, albeit later than we had hoped for.

HERE is the press release, opening up more opportunity for the mainstem sport fleet.

This additional opportunity is based on a projected return of 161,800 upriver-origin adult spring Chinook. The updated projection exceeds the preseason forecast of 122,900 adult fish and is slightly higher than the recent 10-year average return of these fish.

The specific season dates, bag limits, and open area for the additional fishing days are:

• Bag limit: Two adult hatchery salmonids (Chinook or steelhead) per day, but only one may be a Chinook; shad may also be retained.

• Open area: Tongue Point/Rocky Point line upstream to Beacon Rock (boat and bank) plus bank angling only from Beacon Rock upstream to the Bonneville Dam deadline. The legal upstream boat boundary is defined as: a deadline marker on the Oregon bank (approximately four miles downstream from Bonneville Dam Powerhouse One) in a straight line through the western tip of Pierce Island to a deadline marker on the Washington bank at Beacon Rock.

Columbia River spring Chinook salmon seasons are driven by balancing opportunity with Endangered Species Act limitations, provisions in the management agreement between the states and Columbia River Treaty Tribes that specify the total harvest guideline of upriver-origin spring Chinook and guidance from the Oregon and Washington Fish and Wildlife Commissions regarding the allocation of spring Chinook among the non-treaty fisheries.

Fishery managers scheduled another hearing for 2:00 pm on Wednesday, May 18 to consider the latest information on catch rates and determine if additional fishing days can be added.

For the latest on Columbia River fishing regulations, visit https://myodfw.com/recreation-report/fishing-report/columbia-zone

Anglers are awaiting a stronger showing of spring Chinook before excitement triggers again for north coast anglers. Offshore weather is for crap, so most sensible sportboats will be sidelined at least until Saturday. It looks like it may be a volatile weekend for offshore weather.

With winter steelhead done, inland anglers can focus on what is likely to be a meager return of summer steelhead to the Wilson and Nestucca systems. It sounds like maybe 50,000 summer steelhead smolts get planted in each system, often yielding around a 1% return in poor ocean conditions so anglers could expect maybe 500 – 1000 returning adults to pursue. In good ocean conditions, biologists believe the Siletz return can be gauged at return rates closer to 4% – 5%. Summer steelhead returns have certainly been depressed in recent years, but it looks like many salmonid runs are making a come-back this year.

Effort has been low on the Siletz as of late, but that too will change as June and July roll around.

The bigger news on the north coast is always going to be spring Chinook in Tillamook Bay and the Nestucca system. The Nestucca always seems to realize later returning adults, destined for Three Rivers, but the Tillamook Bay/Trask River run is already underway. It may be feasible to expect a more normal return timing for Tillamook Bay springers since this year is not typical relative to recent years. It’s cooler, there’s more water in the district’s rivers and the ocean is very productive right now. It appears as if the run is already underway.

Trollers working the west channel have been scoring a few fish. There was a guide we reported on last week that caught at least one fish in the west channel, and one avid sport boat put three in the fish box on Sunday. Those boaters are trolling herring for those fish, targeting the last half of incoming tide and the first part of outgoing. It has grown in popularity in recent years and justifiably so. Anyway, it seems it’s worth the effort right now and will only get better from here. The west channel fishery seems to produce the best on medium tide exchanges.

There are a few boaters working the upper bay on a daily basis, and fish are being caught with more regularity. Hopefully, the run comes in during a more normal time frame and this fishery remains productive for the month of May.

While recent rains have been a blessing, they certainly have put a damper on the Spring Chinook, winter steelhead and off shore fishing as of late. Catches of all the above had been good to excellent prior to the beginning of this week and appears to be the same until mid next week. A small window of opportunity maybe on the Rogue Friday and Saturday before forecasted rains bring the flow up drastically.

Blustery conditions over at the coast will keep boats off the ocean this weekend. Maybe for those with enclosed cabins, some sport crabbing and/ or surf perch fishing out of Winchester Bay might be an option.

The Lower Rogue took a dip in action as well this week but should be in prime condition mid to end of next week. Plunkers at Lobster creek and Huntley Park working Brads cut plugs in the higher flow might get lucky.

The mid Rogue is still producing some Winter steelhead, but only hatchery fish can be retained and there’s at least 50% down runner fish. Anglers are starting to change their efforts to Springers which are starting to show up with only a couple “reported” caught near Grants Pass.

The upper Rogue is producing catches of winters and the fly anglers have been having fun with them as well. Only 2 Spring Chinook have been counted at the hatchery so far and should start seeing more by end of next week.

Coastal and inland lakes and ponds have been producing nice trout. On the warmer days, bass and bluegill are biting.

Best bet for this weekend is the lower and upper Rogue for Springers (lower) and steelhead (upper). Flow will be increasing on the lower, so it might be blown out by Sunday making Fri/ Sat “the window”. Lost Creek is still producing some nice trout as well as the coastal lakes that have been stocked and there’s not much pressure. Crabbing and surf perch out of Winchester Bay is also a good option.Jeff’s detailed report, multiple lake updates, and forecast in this week’s version for Members!