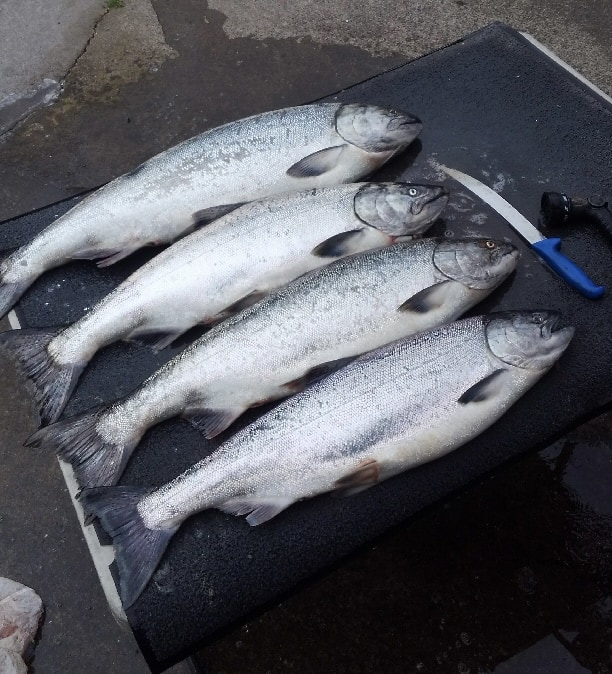 Springers are still falling in Oregon City, where 100% of the caught fish were fin-clipped for two weeks in a row. Shad are bountiful in the Oregon City area as well but sunny skies are typically required for great catches.

The Willamette will see a unique opportunity to catch and RETAIN sturgeon between 44″ and 50″ downstream of the Milwaukie Bridge deadline. Check this press release to make sure you have all the regulatory information that you need. No fishing after 6:00 p.m. as an example.

The Clackamas continued to put out summer steelhead, for bank anglers this week. Hatchery spring Chinook are still absent from the catches and most are surprised by the number of summers around, given this year’s poor steelhead performance.

The Sandy seems to be producing more spring Chinook than summer steelhead as of late. It’s not that the catches are great, but catchable numbers are present.

Both the Sandy and the Clackamas are forecasting a relatively significant bump in water levels this weekend. That’s welcome news to fish and fishermen.

North Coast Fishing Report – Opportunities are about to pop for north coast anglers.

Nearshore and all-depth halibut fisheries, ocean coho (south of Cape Falcon), spring Chinook, catch and keep sturgeon fishing, bottomfishing and crabbing are all on the table for anglers on the central and north coast this weekend. Now, we just need the weather and fish to cooperate.

Most fisheries are progressing as expected, spring Chinook in Tillamook Bay remains challenging, but we’re in peak season.

District rivers will see a slight river bump over the weekend, but fish are likely to respond given how dry the weather has been as of late. Summer steelhead action is improving on the Siletz River, but the Wilson and Nestucca remain challenging. Spring Chinook fishing on the Trask and Nestucca should improve this weekend, but anglers will still have to employ low-water strategies for success.

Ocean weather may settle down by Sunday or Monday, but that’ll be too late for those wanting to fish the productive halibut grounds out of Newport.

Anglers will be anxious to test the waters for the predicted abundant coho return this year. It’s only open south of Cape Falcon starting June 12th. It’s expected to be good, really good. Coho this time of year aren’t large in size however, but soon, they’re expected to put on about a pound per week when feed is most abundant.

The weekend weather forecast calls for fair skies with temperatures in the 70s and 80s throughout the region. Possible scattered thunderstorms around the high lakes on Sunday.

All of eastern Oregon is looking good for next week, with temperatures in the 70s and 80s throughout Eastern Oregon, with light to only moderate winds forecasted.

Temperatures in the 80s next week. Areas closer to the Cascades have some possibilities of showers.

Lower Deschutes River:
Anglers have been having good times.  The river has become a whole lot quieter now that the crazy days of salmon flies have come to an end.  Caddis are active on the warm days and becoming the dominant insect anglers should focus on.  Look for Yellow Sallies as well.

Metolius River:    Green Drakes
are going strong on the Metolius.  Good hatches are happening all along the Metolius, continuing with a mix of green drakes, PMDs, some BWO and caddis on the river right now, often showing at the same time.

North and South Twin Lakes:  South Twin is
fishing well with stripped leeches and balanced leeches under an indicator.  Fishing with bait is starting to take a good number of fish now.  Damsels are active now, and anglers are having success on spoons and
spinners.

Suttle Lake:  Fishing with jigs, suspended lures, and balance leeches together with chironomids are taking fish.
Suttle should start fishing well with the incoming warmer weather.

Check out Glenn’s detailed report and forecast in this week’s paid version for Chinook and Steelhead
Members both!

My wife is an accomplished writer, and certainly wiser than I, so I take her words seriously when she says, “If you write it down, it can no longer own you.” I’m not so sure that’s true, when talking about what lies ahead for our planet’s most prized asset, our oceans.

We’re fortunate here in the Pacific Northwest. Our fisheries are intensively managed, we have safeguard environmental regulations that help keep our waters cleaner than most other countries and opportunity for ocean harvest is on the increase, versus other countries that are leaving their depleted waters for more fruitful ones in other parts of the world. I’ve frequently written about the benefits of our historic protections in the deep reef areas that have led to larger fish and more abundant populations spilling over into other regions of the ocean and the recent relaxing of regulations that have literally saved some species from becoming overfished to the point of no return.

Now it seems, nearly every year, we get more time to fish in the deep reef fishery, we get a higher bag limit of sea bass, and the groudfish we are catching, are larger in size than I ever remember. Our fishery management strategies are working, there’s no reason to modify, but certainly ways to improve.

Unfortunately, at nearly every turn of the tide, we see the bigger picture. If you’ve ever had the chance to see some of the out-of-this-world footage from BBC’s David Attenborough’s Planet Earth series, it is captivating and educational beyond belief, and gives you a sense for how unique and inspiring our wild earth is. As incredible as the terrestrial footage is, relatively speaking, ocean footage, while wildly remarkable, speaks volumes as to how little we know about the ocean in comparison to our terrestrial lands.

Watching the June 6th 60 Minutes program was just another eye-opening experience when they featured David Attenborough and the incredible body of work he’s created for mankind and the planet. While it’s all wonderful to watch, if you go to the 7:40 mark, he starts in on coral reefs and our world’s ocean. Attenborough states, “We depend on the natural world for every mouthful of food we eat, and indeed every lung full of air that we breathe.” Nothing could be closer to the truth.

It’ll be a memorable year this season. Coho salmon numbering over a million back to the Columbia River, spring, summer and fall Chinook numbers rebounding from rock bottom in recent years and abundant opportunities for rockfish and halibut will fill the tables and freezers of many northwest families this summer. But we also know, it won’t stay this way for long. The fish production pendulum will once again swing low and what’s most alarming is that the low swings are becoming even lower every time.

Most of us with any gray hair have seen the highs and the lows of our fish populations, especially the ever-volatile and short life-cycled salmonids we often pursue. Because salmon have such a short life cycle, they are a more “canary in the coal mine” indicator of ecosystem health than other, long lived species such as rockfish or sturgeon. Since that’s the case, we’ve all seen firsthand how the ocean and our freshwater ecosystems are performing, volatile at best.

At the very least, please recognize the importance of our oceans and educate your fellow anglers and certainly your children that collectively, if the oceans fail, so do we. There’s so much at stake and if we want to continue to reverse the trend and stave off a point of no return. Bold action must be taken now, and it must be taken with bi-partisan support.

Enjoy our oceans, I certainly do and I’m one of the fortunate few that have been able to make my living at it. Fishermen have a larger stake in the ocean’s health and productivity. It’s our great responsibility that we do our fair share in making sure it’s here for future generations to also enjoy and thrive.

Ana Reservoir: There are reports of good fishing on Ana Reservoir. The reservoir was stocked several times including with 2400 trout last week.

Lofton Reservoir: I’ve fished Lofton in the past, and heard stories dating back 40 and 50 years of some of the trout taken from Lofton. Lofton was stocked this week with 700 legal and 300 trophy trout, and is scheduled to be stocked again next week with the same mix of trout.

Krumbo Reservoir: Krumbo has been stocked with 13,000 rainbow trout during April.

Summer Chinook numbers are beginning to rise on the Columbia, while fishing has been fair. The best bite seems to be for bank anglers at Bonneville Dam. Summer steelhead are beginning to show in local tributaries, albeit slowly.

Shad anglers are doing well, and the Bradford Island area on the Oregon side is finally open for fishing. John Thompson of Sportsman’s Warehouse in Vancouver, (360) 604-8000, reports he can’t keep shad darts on the shelves.

It’s free fishing weekend in Washington state. While you do not need the license, all other rules and regulations apply. This is a good time to get the family out for some fishing fun.

Lewis and Washougal Rivers Fishing Report—Fishing pressure is still way down on the river, and the latest creel survey only found one fishless angler. Thompson has heard a few reports of summer steelhead coming to hand, but those reports have been few and far between. At this point it has become obvious that the run will underperform. What fish there are can be found from the hatchery down to the Golf Course, but a few can be found down at the Hole in the Wall in Woodland.

Reports from the Washougal are still hard to find, according to Thompson. There should be a few steelhead in the lower river, but there are few anglers trying for them. With fishing better in the main stem Columbia, it is unlikely this fishery will get much notice for a while.

Local lakes Fishing Report—Trout fishing continues to fall off at Klineline Pond and Battle Ground Lake, while warm water fisheries are picking up. Vancouver Lake is fishing very well for panfish, and the lake sports a surprising number of good-sized largemouth bass. Lacamas Lake is fishing well for largemouth bass, and yellow perch.

Fishing in the Kalama River has slowed according to Thompson of Sportsmen’s Warehouse, although a few summer steelhead have been caught. The spring Chinook run is slowing down, with most fish having moved through the river. Fishing pressure has also slowed, due to the lackluster fishing, and a better bite in the Columbia. Summer steelhead in the river are falling for jig and bobber, or bait and bobber. In the canyon hardware and drift fishing has brought a few bites.

Drano Lake and Klickitat River Fishing Report—The action continues to slow for spring Chinook at Drano, and fishing pressure is falling off. Only one Chinook was recorded for 16 anglers in the lake’s most recent creel survey. For all practical purposes the Chinook run is over.

The Klickitat is still giving up a few springers for bank anglers, and starting June 4 the river reverted to permanent rules, which allow fishing every day of the week, a two-Chinook limit, and anglers can fish up to the hatchery. Four surveyed bank anglers had two Chinook.

Local Lakes Fishing Report—Goose Lake has been heavily stocked with trout and the fishing is excellent. Cutthroats and rainbows are both biting well on a wide variety of offerings including bait, spinners, flies, and plugs. Both bank and boat anglers are getting limits.

Catch The Guide’s Forecast on Facebook and be sure to select the like me option.  We’ll be posting special updates and discounts only on our Facebook page.
Don’t miss it!