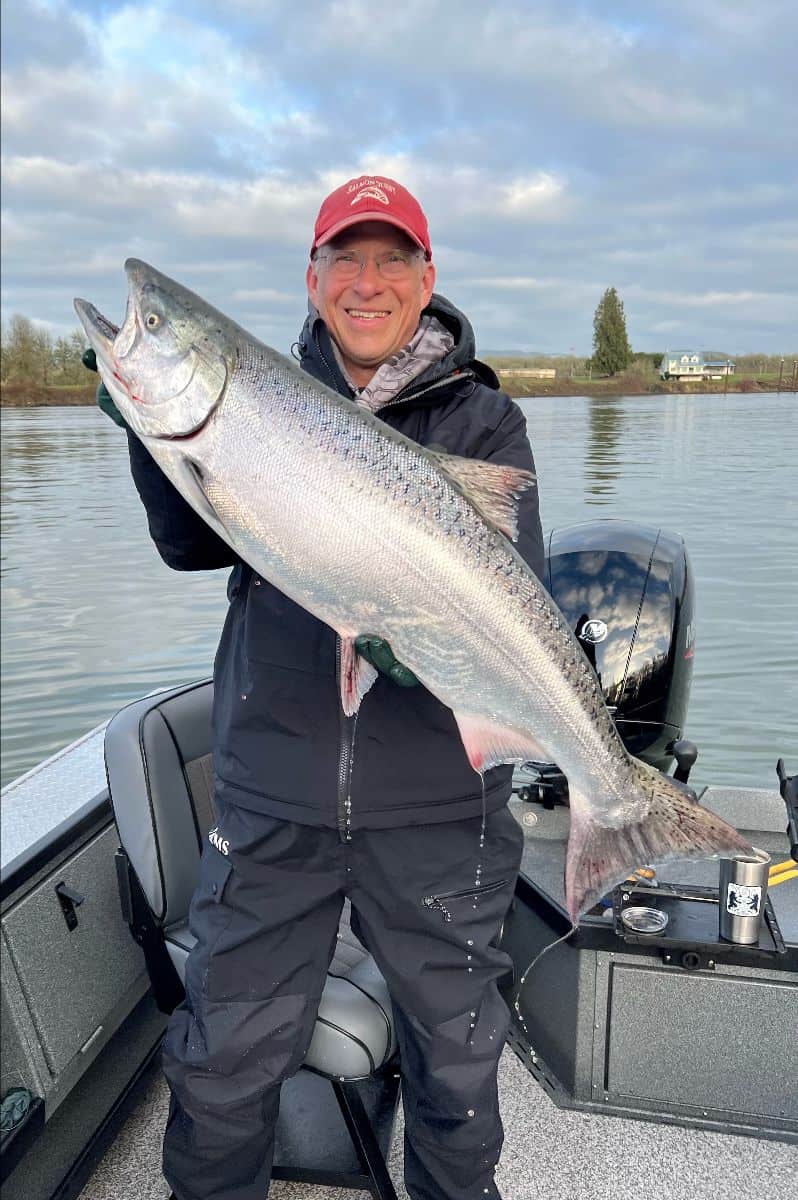 Clackamas River Fishing Report – Catches in the Clackamas have been good, with good success coming from bank anglers in the lower reach. Wild fish are now making up the bulk of the catch but district biologist Ben Walczak reported the hatchery seeing a nice bump this week, and overall, may see around 1,000 returning adults if all goes their way. It’s a good time to target steelhead on the Clackamas right now, both wild and hatchery fish.

Sandy River Fishing Report – Avid angler Jeff Stoeger reports, “Hello All. This week’s report we can confirm that two springers were caught last week. The fish weighed in the mid-teens. This week we saw the river take just over a foot jump and the river is still fishable. The freezing level will be dropping and the river should be ideal for next week. There have been fresh fish entering the river daily with most of the fish still being winter steelhead as well as summers and now springers showing up.”

There’s going to be a whole bunch of trout stocking going on in the coming weeks, in preparation for spring break. Check out the upcoming stocking schedule HERE.

North Coast Fishing Report – Steelhead anglers had another tough week for “Peak season,” but persistent anglers are still scratching out a fish here and there on most north coast systems. The Wilson and Nestucca systems are producing very sporadic catches, even under great water conditions. Wild fish returns don’t seem to be all that much better and it’s not likely to significantly improve in the coming weeks. Winter steelhead however, remains a viable option into mid-April.

Bottomfishing catches were good last week, under friendly seas. Friendly seas won’t come around again by the weekend, and next week isn’t looking all that promising either.

Interest for steelhead will start to fade, based on Willamette Valley spring Chinook catches. That’ll make crowds more tolerable in the coming weeks and those systems without a hatchery option will be very pleasant to fish. Spring Chinook are still months away.

Like Willamette Valley lakes and reservoirs, the stocking schedule for coastal systems will be pretty robust in the coming weeks. Might make for a nice combination option for those planning their upcoming spring break.

Bay crabbing is fair at best, tides aren’t all that favorable either.

Afternoon minus tides may produce good razor clam digs along the north coast, but a robust swell may keep clams deep, where a pounding surf impedes their shows.

The much needed rain from last week and into this week got a nice spur in action on most steelhead rivers and streams in SW Oregon. The Rogue and Chetco got a nice “spur” with reports of limits of chrome within the past 7 days!  More rain is expected on Saturday as a smaller front comes in and should help get river levels back into shape.

Avid angler in Grants Pass Joe Brandt reported a “nice” day on the Chetco (see main photo) Wednesday working plugs wrapped with fresh caught smelt from the Harbor boat basin . He caught 3 fish in a short time so I guess that’s something to consider in your repertoire of baits. He’s back to it today (Thursday) and hopes it keeps working!

The Elk and Sixes were also in fishable shape briefly and should also fish good Sunday. There’s still plenty of fish in these systems but is starting to wind down.

The Rogue river has had a little fluctuation in flow the past week which brought on an on and off bite mostly on the middle section. finally got a little rain that was enough to get some steelhead action going…,mostly in the mid section from Rogue River down to Grave Creek. Varied showers in the Rogue valley have helped fluctuate flow and more rain is in store on Saturday which should definitely help again. Outlook is good for the weekend and if you’re a “die hard” steelhead angler, you’ll take your rain gear and hit it Saturday🎣

A few spring Chinook showed up in recent creel surveys, but cold water is slowing the bite. Heavy rains forecast for the weekend may blow out the tributaries again, and slow the peak of the late steelhead run.

Springer catches are still slow, although a few were taken in the Cathlamet area this week. Most anglers are waiting for warmer water. Late run steelhead are showing in good numbers, but river conditions on the big systems are still marginal.

Trout fishing is improving across the board, and the local lakes are benefitting from a rash of stockings. Watch for fresh trout plantings, as well as big broodstock trout and steelhead plantings HERE

Lewis and Washougal Rivers Fishing Report— Spring Chinook retention will be allowed through April 30 on the Lewis, with a two fish limit, one of which may be a hatchery Chinook. Anglers are switching tactics and waiting for spring Chinook to show up here, but there have been no reported catches in-river as of yet. Steelheading is very slow, and the river has recently been full of smelt, and sea lions. Neither seem to be doing anything positive for the bite. Some anglers are trolling at the mouth of the river, and a few anglers are also plunking in the lower river. No report on success as yet.

Surprisingly, the Washougal continues to give up a few steelhead, including some hatchery steelhead, when the river’s run should be well over. The most recent catches have been reported in the lower river, although some boaters up high with private access to launch are finding a few, too. Bobber and jigs or beads have been effective, as has bait.

Merwin and Yale Lakes Fishing Report—Yale Lake cleared out some this week, but Merwin is still a little dirty, and if the forecast heavy rains come back this weekend, it might get worse. Anglers are still getting kokanee, but it has been slow, and there is still debris causing issues. Most anglers are still getting their fish, it’s just taking longer than usual. The schools are in the top 15 to 20 feet of the water column, and taking the usual kokanee offerings. Most anglers are trolling kokanee dodgers ahead of spinners or hoochies tipped with scented corn.

Cowlitz and Kalama Rivers Fishing Report—The state did not offer sportsmen another round of smelt dipping, although there seem to be plenty of them in the river. The steelhead bite had improved last weekend, but has slowed since then, according to Dave Mallahan of Dave’s Guide Service (360-201-9313). Creel surveys also indicated an improved bite, with 82 bank rods keeping 12 steelhead and releasing one steelhead. 39 boats/131 rods kept 69 steelhead in the upper river. While most boaters are bobber-dogging, some are pulling plugs or side drifting. Bank anglers have been gathering below the mouth of Blue Creek, and have been getting some fish by using bobber presentations and drifting. The river has cleared out quite a bit, but forecast rains this weekend could cloud it up again.

Fishing in the lower Cowlitz was also good this past week. Creel surveys found 72 bank rods kept 19 steelhead and released one steelhead. Three boats/seven rods kept seven steelhead. Most anglers are fishing stationary offerings, including plunking with spin-n-glos and bait from the bank, while boat anglers are pulling plugs and bobber-dogging.

The Kalama has remained a little bit dirty following the heavy rains, and it has slowed a little this past week. Anglers are still finding the fish from the mouth up into the canyon, and a variety of methods are working. Boat anglers are pulling plugs and fishing bobber presentations, and running diver and bait. Bank anglers have been fishing bobber presentations, drifting, and even throwing hardware.

Walleye fishing has been excellent in the Gorge, and this week The Dalles Pool really took off. The most recent creels in that pool found 18 boats/41 rods kept 110 walleye. Fishing is good in the John Day Pool as well.

Receive these SW Washington and Oregon fishing
reports in your email on Thursday nights by signing up here.