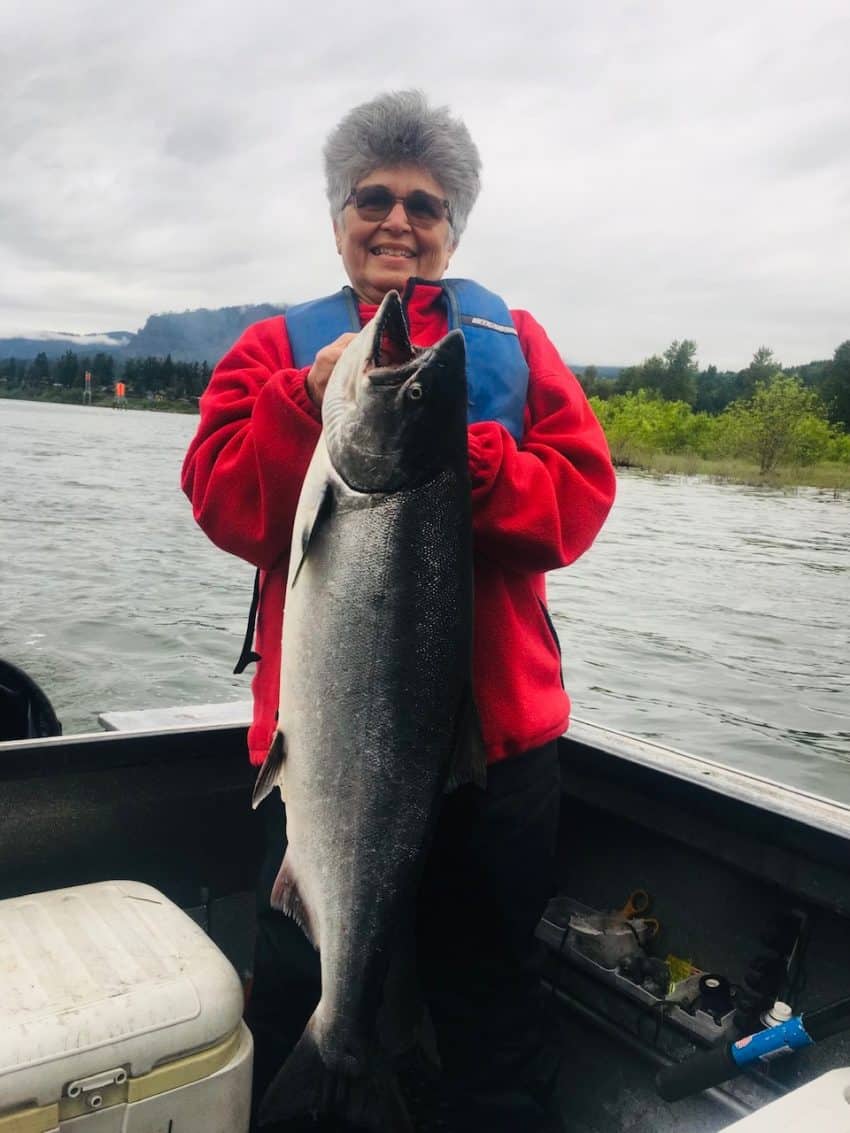 Anglers interested in another crack at catch and keep sturgeon fishing will be on the Willamette on Saturday. Catches from last weekend were under-whelming, but at least there’s a metro opportunity for a keeper.

Anchor anglers working the Columbia River near Bonneville are producing good catches on spinners and plugs. It’ll only get better in the coming weeks. Shad fishing is excellent here too.

The Sandy River is still giving up an occasional spring Chinook, but it may get more challenging as temperatures warm and swimmers and rafters start inundating the river system. The upper reaches above Oxbow Park will offer up the best chances.

The Clackamas is surprising anglers with a nice grade of summer steelhead. Spring Chinook remain next to non-existent, but the summer steelhead are large in size. Early mornings will yield the best results.

North Coast Fishing Report – The ocean is forecasted to be windy this week, with lots of “Small Craft Advisories” due to come out, limiting the ocean opportunity for salmon, halibut, bottomfish and crab. Anxious anglers will have to wait for safer conditions, but when seas calm, it should be game on.

Tillamook Bay anglers have a soft tide series to look forward to this weekend. Trolling herring along the inside of the jaws may be one of the better district options on the north coast. Target high tide and the last half of outgoing.

River fishing on the Trask and Three Rivers improved with last week’s rain freshet, but levels are back down to summer lows. Sea-run cutthroat in the tidewater reaches of most north coast systems, along with the estuaries themselves should prove productive for the few participating in this fishery.

The lower Columbia should produce some summer Chinook as the westerly deadline is now the Astoria/Megler Bridge. High tide above the bridge with bait or spinners could produce fair catches. Catch and release sturgeon fishing remains good in the Astoria area, with most fish over 50″ in length.

The weekend weather forecast calls for fair skies with temperatures in the 70s and 80s throughout the region. Possible scattered thunderstorms around the high lakes on Sunday.

All of eastern Oregon is looking good for next week, with temperatures in the 70s and 80s throughout Eastern Oregon, with light to only moderate winds forecasted.

Temperatures in the 80s next week. Areas closer to the Cascades have some possibilities of showers.

Lower Deschutes River: Anglers have been having good times. The river has become a whole lot quieter now that the crazy days of salmon flies have come to an end. Caddis are active on the warm days and becoming the dominant insect anglers should focus on. Look for Yellow Sallies as well.

Metolius River: Green Drakes are going strong on the Metolius. Good hatches are happening all along the Metolius, continuing with a mix of green drakes, PMDs, some BWO and caddis on the river right now, often showing at the same time.

North and South Twin Lakes: South Twin is fishing well with stripped leeches and balanced leeches under an indicator. Fishing with bait is starting to take a good number of fish now. Damsels are active now, and anglers are having success on spoons and spinners.

Suttle Lake: Fishing with jigs, suspended lures, and balance leeches together with chironomids are taking fish. Suttle should start fishing well with the incoming warmer weather.

Ana Reservoir: There are reports of good fishing on Ana Reservoir. The reservoir was stocked several times including with 2400 trout last week.

Lofton Reservoir: I’ve fished Lofton in the past, and heard stories dating back 40 and 50 years of some of the trout taken from Lofton. Lofton was stocked this week with 700 legal and 300 trophy trout, and is scheduled to be stocked again next week with the same mix of trout.

Krumbo Reservoir: Krumbo has been stocked with 13,000 rainbow trout during April.

Finally some much needed rain last weekend “sweetened” up the Rogue and helped cool in down for the Spring Chinook waiting at the mouth to come up. Even with that, catch rates are still nothing to brag about and most have been up river past Shady Cove. The Rogue Bay at Gold Beach got some better action right after their 4″ of rain Saturday but fish are screaming up to their spawning grounds. Trout and bass fishing has been great at most lakes and streams. Coho fishing that opened last Saturday in Brookings produced some limits and (early) Chinook bites when the weather wasn’t a factor. Expectations for the upcoming weekend Chinook opener is high as are the winds! One might try some tide water Sea run Cutthroat trout fishing on the Chetco, Elk, Sixes, Pistol, and Umpqua rivers. Here’s a link from ODFW on Cutthroat fishing tips.

HAPPY FATHER’S DAY TO ALL THE DAD’S!

Josh reports that the salmon fly hatch is winding down from Shady Cove on up to Lost Creek. It slowed down with the cooler weather last weekend but has picked up and expected to go on for another week or two. Some summer and even a few late winter steelhead are still being caught around the “Holy water” (which is the short section between the Dam and the hatchery) and down to Shady Cove using any stone fly pattern- dry flys like a chubby Chernobyl in a size 6-8 and wet stone patterns and nymphs if fish aren’t going for the drys. “There are many varieties to choose from” says Josh as he recommends having several in one’s fly box because you never know what they will bite on from day to day.

Weekend outlook in the ocean for Saturday’s Chinook salmon opener looks doubtful until maybe Sunday. Gale and small craft advisory’s are in effect Friday and possibly into Saturday. Reports of Coho limits earlier this week when boats could get out indicates a decent salmon season. Coho are usually in the top 15 or so feet of water and trolling herring or anchovy behind a flasher will entice them. Occasional Chinook have been know to get caught this way as well.

Shad, sockeye, and Chinook offer action in the Columbia, while summer steelhead continue to struggle in the tributaries. Warm water fisheries and high-country trout continue to shine.

Fisheries in the Columbia are improving and doing well. Chinook and sockeye are biting in the Vancouver area, and shad are biting so well that local stores can’t keep shad darts on the shelves.

Fishing pressure dropped at most local lakes this past week, probably a result of cold, wet weather. However, panfish, walleye, and bass continued to bite well both in the Columbia and local lakes.

High elevation trout lakes will provide good fishing through fall, although the bite slowed with the cool, wet weather last week. Those lakes should produce very well this week.

Lewis and Washougal rivers Fishing Report— The river remains at a good flow for this time of year, and conditions are good in the river. There are a few summer steelhead being caught in the Lewis, but the bite is not hot and the fishing pressure is low as a result. That’s the word form John Thompson of Sportsman’s Warehouse in Vancouver, (360) 604-8000. By now the river should be kicking out summer fish in good numbers, but those numbers just aren’t there. Low expectations for the return following the poor winter showing are certainly proving to be the case. Still, anglers are finding a few fish from the hatchery down to the Lewis River Golf Course. The few fish biting are taking the usual fare, jigs and bait fished below a bobber, plugs, and drifted baits.

Few anglers and fewer fish are the story in the Washougal River. Recent rains mean the river is at a good flow for this time of year, but there are no strong reports, either of fish or angling pressure. If anyone is doing well here, they are keeping it quiet.

Merwin and Yale Lakes Fishing Report—The WDFW reports that this past week fishing was fair to good in Merwin, and good in Yale, following a pattern that has been the case all year. The fish in Merwin are acting finicky, and have been found in varying depths from 30 to 60 feet. Once again, the anglers that have been the most successful have been quick to adjust to the changing depths and favored bite of the schools of fish. Anglers are also reporting that the fish seem smaller this year, and pike minnow are attacking the baits meant for the kokanee and making pests of themselves. While hootchies tipped with corn have been the best bet, the fish are sometimes changing preferences sometimes even during the course of the day.

While both lakes have been crowded, the pressure has been less at Yale.

Cowlitz and Kalama Rivers Fishing Report—Steelhead fishing remains about the same, with a few fish showing up in both the upper and lower Cowlitz. The latest creels had 15 bank rods keeping one steelhead, while four boats/nine rods kept six steelhead above the I-5 Bridge. Below the bridge 32 bank rods kept three steelhead and released one steelhead. One boat/three rods had no catch. Fishing pressure is still low, with more anglers fishing the better bite to be had in the Columbia. Last week, Tacoma Power employees recovered 65 spring Chinook adults, 16 spring Chinook jacks, 17 spring Chinook mini jacks, 30 summer-run steelhead adults, and three winter-run steelhead adults during five days of operations at the Cowlitz Salmon Hatchery separator. Last year’s returns at this time were better, reflecting the weakness of this summer run.

Fishing has been fair in the Kalama, according to reports heard by Thompson of Sportsmen’s Warehouse. A few Chinook are still getting around, mostly in the upper and middle sections of the river. Steelhead are making a bit of a show, although the bite is fair at best. Flows and conditions are good following recent rains, so there should be a decent bite this weekend. Fishing pressure has fallen off with the slower Chinook bite, but anglers can still expect company this weekend.

For the full report, including the local lakes and the Gorge fisheries, subscribe to the SW Washington Paid subscription.
You can read Terry Otto’s recent article in the Columbian on fishing high elevation trout lakes HERE.