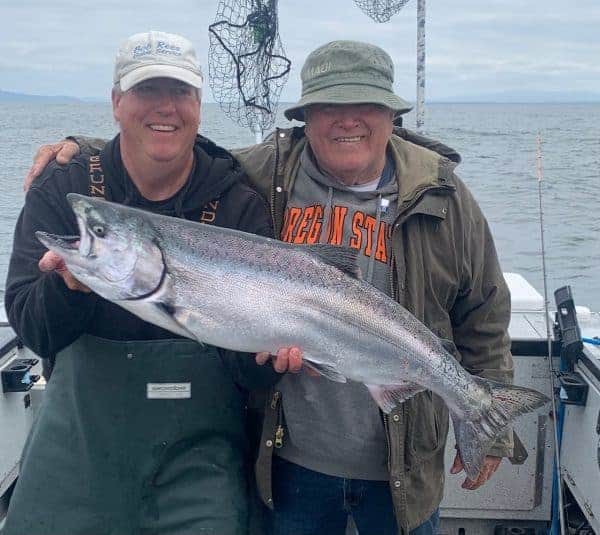 Portland/Metro Fishing Report – With little metro opportunity, anglers are largely headed west to take advantage of soon-to-be robust returns of coastal Chinook and coho, still aggressively feeding off of the Oregon Coast. The Willamette spring Chinook run is over, especially with the mainstem hitting 80° hot. Passage over Willamette Falls has slowed dramatically. Next up is fall coho, well over a month away.

It’s early for mainstem Chinook on the Columbia, but it won’t be long. Steelhead numbers at Bonneville continue to surprise biologists, but anglers are reminded that steelhead retention is closed downstream of Bonneville Dam (and upstream for a ways too = check regulations).

Clackamas River Fishing Report – Summer steelhead remain an early morning option for anglers so motivated. Warm temperatures have more rafters than salmon or steelhead using the lower river these days however. It’s definitely an early morning show for the few showing up to “go to work.”

Sandy River Fishing Report – Avid angler Jeff Stoeger reports, “The river is currently running a light chocolate brown due to glacial melt on Hood and the river should clear up a little with cooler weather at night slowing down the melting.

If you do go out to river and plan on fishing, please make sure you need to know where you’re stepping and use a wadding staff for the river color makes it difficult to see where to step.

Now to fishing there has been some really good action on springers the last couple of days. Most of the action has been from Dodge to Oxbow with good numbers of hatchery fish in the mix. The springers have a little color but they are cutting beautifully.

Willamette River – From Harrisburg, to Corvallis, to Albany:

The Willamette River is currently at 40200 CFS at Harrisburg.  Nice fishable flows right now, and wading the gravel bars is good.  Watch for afternoon and evening caddis activity.

The usual impressionistic nymphs, like PTs will take trout.  Use jig style flies to prevent hang-ups, and I’m catching more trout on jigged hooks than traditional most recently.

Find the full report and forecast for Members on the Willamette Valley/Metro from this page here.

North Coast Fishing Report – Coho is still king for offshore anglers from Newport to Astoria. Catches are in full swing and action should remain good for several more weeks. Astoria is producing some of the best catches off of the Oregon Coast but Newport, Depoe Bay, Pacific City, Garibaldi and the Nehalem area are all good options as well.

The summer all-depth fishery opened today (8/4) and is expected to produce fair results for each Thursday – Saturday it’s open through October 31st (or until quota is met). Lots of halibut remain on the nearshore quota as well.

Albacore are in, with boats from Illwaco to Charleston reporting sporadic success. Anglers were going over 40 miles offshore out of Astoria to find success on Wednesday.

Ocean crabbing is challenging with many of the keeper-sized crab in a softshell state.

District rivers are low and clear, with fair numbers of darkening spring Chinook and spooked summer steelhead around. The Wilson and Siletz remain the best freshwater options for summer steelhead.

With little else to get excited about in the Columbia, we’ll be spending more time talking salmon, particularly in the Buoy 10 fishery, in the coming weeks.

As for other options, steelhead fishing is no longer an option as the fishery is not closed downstream of Bonneville Dam. Check more Columbia River regulations HERE.

That leaves estuary sturgeon. Reports from guides fishing downstream of the Astoria bridge are not encouraging. Besides crab and sculpin robbing you blind, it just seems many of the sturgeon that were in that reach of the river have moved on. It may be that they have just gone deeper into the river as the river temperatures have warmed. Guides fishing upstream of Tongue Point are still reporting good action as we found some good action ourselves up by Rice Island the other day. Sand shrimp are harder to find now since one of the main suppliers has quit pumping. Fresh anchovies are available however.

The moderate temperatures in the 80s will last through Saturday, and a return to the mid to high 90s takes over starting Sunday.  Sunday and Monday are the hot days.

The Lower Deschutes Canyon gets into the 100s for Sunday through Tuesday before backing down into the 90s.

The Cascade Lakes Highway area remains in the 80s through Saturday, and jumps into the mid-90s for Sunday and Monday.

The ODFW metric of a minimum of 9,900 wild (unclipped) steelhead through Bonneville was achieved last Sunday, July 24.  That means the Lower Deschutes will open to steelhead angling August 15 to September 15.

We will watch to see if the 23,100 wild fish passage by August 31 is achieved that will open the Deschutes for the season.

Note that the Miller Fire is active near Maupin, and currently threatens Maupin.  Stay out of the Maupin area due to the fire.

The Lower Deschutes is steady near the dam, with flows of 3640 CFS in Madras and 4430 CFS at Moody.  Water access is good.

Dry fly activity and hatches have been diminishing, but nymphing and any form of angling below the surface remain good.

It’s yet another repeat report from the past few weeks (that’s a good thing) in that fishing opportunities abound in the hot valley’s inland on the lakes and streams over to the cool coastal lakes and ocean. Now the main issue is the numerous wild fires going on throughout the state that’s providing smoke and some access restrictions.

The Rogue bay action slowed earlier this week but seems to be improving with a 41 pounder on Wednesday!

Summer steelhead are now throughout the Rogue river, but the 100 degree days have mostly seen more rafters and floaters than anglers.

Brookings- Harbor and Charleston/ Winchester bay is producing nice bottom fish limits, big ling cod and even decent halibut action this week. Crabbing is great out of Winchester bay as is some nice Chinook catches out in the ocean.

Surf perch and sea run cutthroat trout in the Eel and Winchuck are still available and is a cool option.

Small mouth bass action is excellent on the lower south and north Umpqua.

Ocean conditions have been favorable since last weekend into this week to provide stellar bottom fishing from Brookings on up to Charleston and Winchester Bay! Friday might be a bit iffy with wind, but the weekend looks pretty good.

A good variety of bottom fish as well as nice sized ling cod can be caught. Crabbing out of Winchester bay is still good.

As of July 1st through August 31st, fishing for bottom fish will be restricted to inside of the 40-fthom regulatory line. Harvest of cabezon is allowed starting July 1 with a daily sub-bag limit of one fish per angler. The daily general marine fish bag limit is 5 fish for the 2022 season with a 1-fish sub-bag limit for China and copper rockfish combined.

Andy Martin- Brookings Fishing Charters 541-813-1082 reports that coho salmon fishing has been slow out of Brookings as the vast majority of the hatchery run has moved up north to make its way back to the Columbia. A few Chinook are being caught though.

DIAMOND LAKE-trout fishing has been giving up some nice trout lately. Smoke from wild fires has not been too bad lately but can change any minute and should call to check for notifications. If you’re not getting bites, then change up your bait or lures. Slow trolling a silver spoon is a good bet. Good quality of fish ranging from 14-20 inches have been the norm where anglers have been targeting the shrimp beds and South end of the lake. Best successes have been for the early bird anglers who get on at dawn.

LOST CREEK RESERVOIR: There’s lots of boat traffic (and waves), so I suggest working the point just west of the bridge into the (supposedly) no wake zone and troll on past up toward the head water. Trolling the typical flasher setup with a wedding ring tipped with worm or power bait is the trick. The lake is warming up, so trolling about 1.5 mph and down to between 45-75 feet will catch em. Also, small spoons in silver and gold (on cloudy days) work good too. The lake is down to about 65% which is still very fishable and navigable, but smoke from the nearby McKinney fire may or may not be an issue.

South Umpqua– bass fishing is going strong especially for small mouth. Any sort of method like bow and arrow, spear, rocks and such are allowed. Tossing spinners and spoons will get em too!

Most anglers are focusing on the coastal areas of our region.  Things for the most part except for tributary steelhead have slowed down. Merwin continues to fish especially well for the mid-summer.

Steelhead fishing is pretty good.  If you know this river, then you understand that it is an early morning or late evening gig.  I was showing a house on Reno Cut Off Road on Tuesday and stopped by the hatchery around 10:00am.  It was busy on the bank and six boats employing a couple different techniques.

Nathan at Sportsman’s Warehouse in Kelso tells me he has heard lots of reports that Steelhead are being caught.  There are still a few Chinook around and fishing great.  Bobbers with bait are the go-to, with spinners in the mix.  The weir is in place.  WDFW checks showed the following:  Four bank rods had no catch. 1 boat/2 rods had no catch.

Flows are way higher, and fishing is picking up again.  At Castle Rock the river is running 5,500 cfs down from 7,000 a couple of days ago.  River flow below Mayfield Dam was 5,000 cubic feet per second on Monday, August 1, 2022. It’s been up and down for sure.  Water visibility is 11 feet and water temperature is 56.3 degrees F.

The weir is in place.  For what it’s worth I have a client who owns property in that community and told me a friend of his picked up a summer run Steelhead.  So, if you live out that way, it might be worth a nice couple quiet hours in the morning or evening.

The tributaries continue to have little to report right now. WDFW reported nothing for the Wind, Drano, and Klickitat. Chinook counts at Bonneville have dropped to below the daily 500 range, which is still substantial. Steelhead are coming in good numbers and remaining consistent.  Steelhead is closed and only hatchery Chinook available for the fish bag. Steelhead is closed as to avoid intercepting the large B run fish heading to Idaho.

Fishing for steelhead abruptly ended on July 31st for Columbia anglers. I checked Kalama bar today around noon and it was desolate.  Seems the desire to keep a Chinook isn’t worth the wait, while plunking in that spot.  Beach locations with deeper drop offs are best for Chinook.  Willow Grove is also a gradual slope beach and not as effective for Chinook. All attention is more focused on the mouth of the Columbia.  There should be some epic reports in the coming weeks. Jim with Looney Coonies had this to say; “There are a few Kings around. We are between the summer run and fall fish.  It’s spotty with a few caught on wobblers and a few caught with Protroll’s. The bankie in Woodland today caught one, according to the fish checker.”

This site uses Akismet to reduce spam. Learn how your comment data is processed.