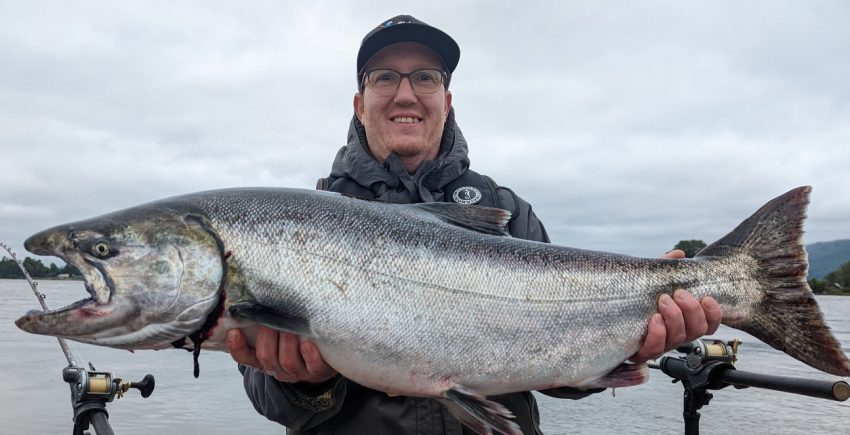 Portland/Metro Fishing Report – Willamette River anglers witnessed a better week than the previous few, with fair to good catches in the lower Multnomah Channel and Oregon City reaches. Catches should start to slow, but trollers can expect another good week in both of the previously mentioned river reaches with trollers working flashers and spinners or Spinfish likely to score the best results.

Shad fishing is still going strong at Oregon City and will remain that way for a few more weeks.

The Columbia re-opens for summer Chinook and now sockeye too. Both returns have surpassed biologists expectations, affording sport anglers the additional opportunity. Anglers are reminded that even though sockeye are excellent eating, they are small in stature, often only 3 to 4 pounds and DO count as adults on your harvest card. If you’re a sockeye enthusiast, be cognizant that you may want to save some space for what’s likely to be a robust fall Chinook return if our later returning fish make a surprise showing like our spring and summer Chinook have this year. The season for summer Chinook runs through the 13th of July. Check the press release HERE.

The Clackamas River, despite being in good shape, is producing poorly for spring Chinook and fair-at-best for summer steelhead. It remains a disappointment, but summer steelhead are still making a stronger showing than we’ve seen in recent years.

Sandy River Fishing Report – Avid angler Jeff Stoeger reports from the Sandy River – What week of weather we had, going from the mid 60’s to jumping up to 100 degrees and the swimmers came out in force. The current condition of the river is that the river is on slow drop and glacial melt is accruing and the river is off color green. The next couple of days the river should clear because of cooler temperatures.

The lower river is still backed up due to the Columbia running at or near flood stage due to release of water from the upper river. Fishing has been good in the lower river trolling spinners and other assorted items. There have been some decent size springers caught and some pushing the low 20’s with most weighing in around 12 to 15lbs.

Starting with spring Chinook, anglers are in peak freshwater season still but action will start to taper in the coming weeks. Most of the spring Chinook are in freshwater now with the Trask and Nestucca being the two best north coast options.

The lower Nestucca has also been consistent for anglers in the know. Driftboaters working the water downstream of Three Rivers continue to find tide fish.

Those seeking summer steelhead have the Wilson, Nestucca and the Siletz as options. Each river is experiencing a better return when compared to the previous few years but anglers are still finding challenging conditions.

And following up on my favorite gateway drug, sea-run cutthroat remain a strong option for bank anglers in the tidewater reaches of all North Coast systems as well as rocky shorelines in the estuaries. There are some quality fish around with few anglers in pursuit.

Shifting to saltwater, when conditions allow, catches have been good. Anglers this previous week however did witness tapered success from previous weeks. The south wind influence from the last couple of days likely won’t help matters. The ocean was too rough on Monday and Tuesday but a few boats did venture out.

The deep-reef bottomfish fishery closes July 1, but cabezon retention opens up for a while. Nearshore bottomfishing action remains good but lingcod have become challenging.

Temperatures on the lower portions of the river are in the 54 to 56 range at Madras and 62 to 68 degree range near Moody.

Middle Deschutes River:  Flows are back to normal.  There is a mix of PEDs, PMDs, and some caddis on the river from Bend to Steelhead Falls.

Haystack Reservoir:   No recent reports.  Was stocked earlier in the year and dropping now.

Lake Billy Chinook:   No new end of June reports.  The earlier reports from LBC is that kokes have been scattered, and down deep.   Effective colors include purple, pink, orange and brass.

Crooked River:   The Crooked River is fishing well.  It is kind of low, with flows in and around 100 CFS.

PMDs, BWOs, midges and caddis are all active right now.  Reports are that the smaller trout are taking flies on top, and the larger trout are being caught with nymphs.

Some anglers have been catching big browns again on Wickiup.

Lava Lake/Little Lava Lake:  Both Lava and Little Lava have been stocked this past week.  These lakes should start improving now.  Look for the callibaetis hatches with the coming warm weather.

However, there are early reports of some slow fishing from Lava Lake, with no other reports in yet. Checking in with some regular Cascade Lakes anglers who have been at other nearby lakes.

Three Creek Lake:  Three Creek Lake is now open and accessible.  Early reports are good, and the lake is due to be stocked next week with 4000 legal trout and 200 trophy trout.

This week’s report from Gorge Outfitters Supply (541-739-2222) in Rufus, is that walleye fishing is super hot right now, especially very early in the morning.   Worm harnesses and bottom walkers are all working well, with pink being the hot color.  Anything shiny and bright is preferred this week.

Bass fishing has been great – many bass are being taken on night crawlers or grubs.

Shad fishing is also hot – lots of anglers are now picking up shad.  Shad killers in blue or chartreuse are working great.

Bass fishing has just okay, heavily effected this past week from a muddier John Day.

No real walleye reports  – anglers have been off the water.

Summer has come in with high temperatures and good options for your fishing pleasure! There’s lots of stocked trout in many of the lakes and ponds with Lost creek

and Applegate among my favorites around Medford area. Coastal lakes and streams have plenty of fish that have been stocked earlier this year and typically don’t get too much pressure.

Coho Salmon season out of Brookings opened up with good numbers of fish being caught when the winds cooperated and appears to be a good year so far. Chinook salmon opens this Saturday and is expected to be good as well but might be a bit wind choppy.

Bottom fishing is still excellent from Brookings on up to Winchester bay!

Spring Chinook on the lower Rogue is dwindling as the fall run is just starting to show as more and more boaters are working the bay now and should progress. The Upper Rogue is seeing some Springer action as well as some summer run steelhead. Good steady flow of 3000+ cfs has kept the water flow good and cool for these fish to get up to their spawning grounds. The salmon fly hatch is also under way and fly fishers are having a good time.

The warm and soon to be HOT weather with usually taper the trout bite but enhance the bass and pan fish bite so don’t forget the small ponds to take the kids out for a fun time.

I just came back from a “trip of a lifetime” with some fishing buddy’s up in a remote area of Vancouver Island BC……. it was amazing and my 3 freezers are completely full! I’ll try and do a pictorial story in next week’s report.

By the time you read this the re-opening for Chinook and opening for Sockeye will have been decided from Thursday’s meeting.  There are multitudes of sockeye in the Columbia.  Folks are catching many of them while targeting steelhead, which currently is open for a single hatchery fish retention.

The water flow is 2,080 and finally at median flows. With a decrease from 4,000 last week. The WDFW angler checks showed two boats fishing eight rods kept one Chinook and released one Chinook. The water color is good but it’s still high water in Woodland.

Kalama River fisheries return to permanent rule: The salmon daily limit is 6; up to 2 adults may be retained. Release all salmon other than hatchery Chinook and hatchery coho. (Through July 31, 2022)

Jim Milanowski with Looney Coonies didn’t fish the area in the last week.  He was focused on fishing the Willamette in Oregon City.  They had pretty good success with Chinook. He went on to say that there’s good numbers of steelhead in the Columbia River from 1-5 bridge down. They got an easy 3 fish boat limit this morning (Wednesday).

Merwin water level is holding steady at 238.00. The fishing is excellent at Merwin. I haven’t heard any good reports from Yale other than the wind was howling there last weekend. The Kokanee are going deeper and in the 40-50ft column currently.  Micro hootchies are the ticket along with garlic corn.

The lower river below Kalama is producing some dynamite summer Steelhead fishing right now.  John Thompson of Sportsman’s Warehouse says that the lower river fishing is nuts.  Both bank and boat anglers are getting lots of fish, including a massive sockeye by-catch.  As mentioned earlier in the report, hopefully its open by the time you read this.  The water is still quite turbid with some lowered visibility.

The Shad are thick and catching is good. The latest YTD Chinook tally at Bonneville is 200,000+ and the Sockeye are running at a record setting pace. Steelhead counts are fantastic for this early in the summer season.

Most smaller lakes are done with trout plants for the year and fishing will begin to get drastically slower. The higher lakes are starting to produce some impressive trout catches, early morning is best.

Klineline Pond – Received an additional stocking of 2,000 earlier in June.

Potholes – If you are into a road trip, I heard that it is red hot for panfish, Bass and Walleye right now.

Vancouver Lake and Lake River System– The E-Coli restriction is still in effect, and they are also monitoring a major algal bloom.

I fished one morning this week at Martin Bar in Woodland. I picked up one hatchery steelhead and lost a dancing Sockeye.  I wish everyone a Happy 4th of July.  Stay safe out there and take care of your dogs and kids during the firework period.

Please contact me by email or text with any questions or comments.  If you are on Face Book, check out our group @TheGuidesForecast.