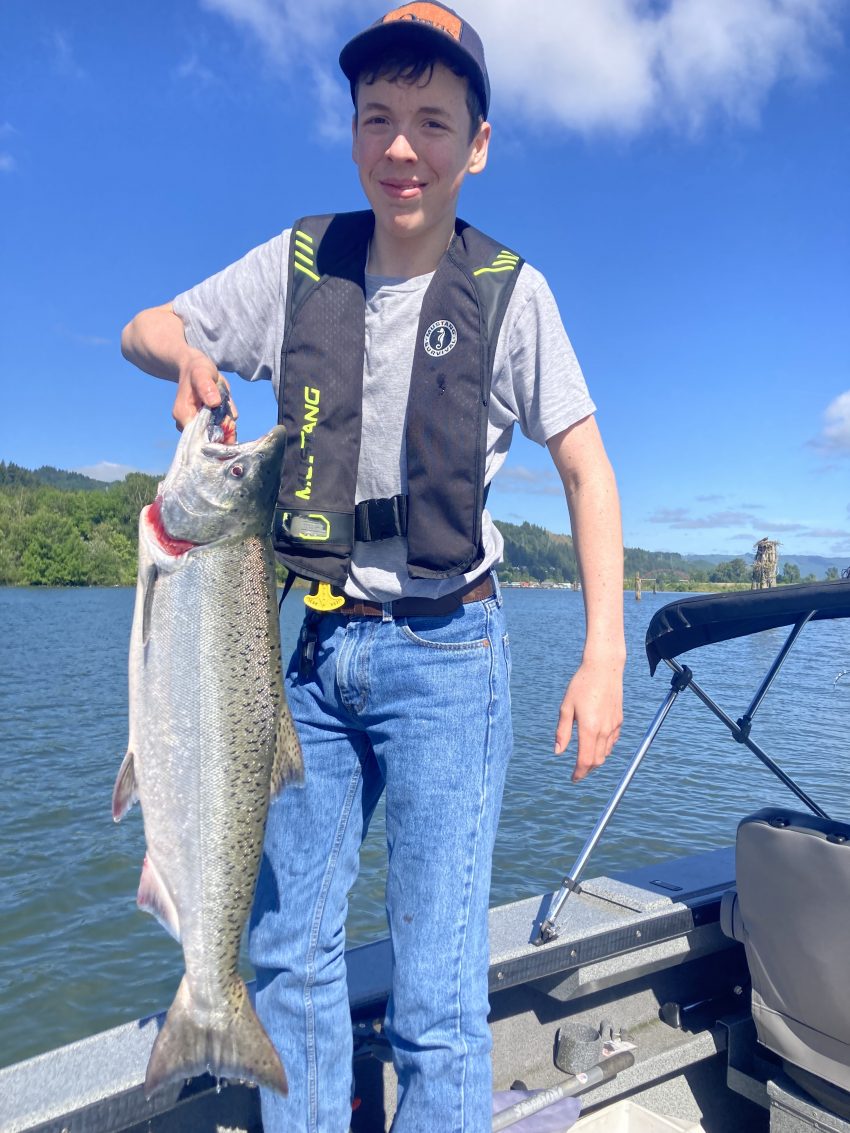 Portland/Metro Fishing Update – Following the last high water, anglers are now back on the Willamette, with several more weeks of good spring Chinook action expected. Anglers will be targeting the lower and upper reaches of the Willamette, both likely to produce good catches over the weekend.

Shad fishing remains excellent in Oregon City and should stay that way for several more weeks too.

The mainstem Columbia is now closed to salmon fishing, but remains open for steelhead. Steelhead catches this week tapered, but there’s more Skamania stock yet to come.

The Clackamas is in peak season right now, with more steelhead than springers being caught. It’s been a good year and water conditions are excellent for weekend anglers, but with the warm temperatures in the forecast, the splash and giggle crowd is soon to follow.

The Sandy is a better metro prospect for spring Chinook anglers. Summer steelhead catches are better than in previous years too. Same applied here however, residents will be seeking respite from hot weather over the weekend.

North Coast Fishing Update – The south of Cape Falcon ocean fishery for coho (and Chinook) is off to a great start. Coho catches were excellent north of Garibaldi although winds has hampered success as of late. Chinook catches are still robust, but the focus will be on the easy-to-catch coho that should be in abundance for the next several months. Catches weren’t as productive out of Newport for a change.

Nearshore halibut has been fair to good out of Pacific City, fair out of Garibaldi. Rockfish action remains excellent. Lingcod are falling fairly easily too.

Spring Chinook is still a strong option although many have blown through north coast estuaries and are now staging in the Trask and Nestucca systems. Be cognizant of the anti-snagging rules if you fish close to the hatcheries on the Trask and Three Rivers systems.

Summer steelhead are available on the Nestucca, Wilson, Three Rivers and Siletz systems. It’s peak season now, but waters are dropping and clearing so stealth strategies are recommended.

Sea run cutthroat should be abundant in most north coast systems for those wishing for a challenge. There are quality fish around however; these are a great gateway drug into larger species of our PNW gamefish. It worked for me!

Temperatures on the lower portions of the river are in the 54 to 56 range at Madras and 62 to 68 degree range near Moody.

Middle Deschutes River:  Flows are back to normal.  There is a mix of PEDs, PMDs, and some caddis on the river from Bend to Steelhead Falls.

Haystack Reservoir:   No recent reports.  Was stocked earlier in the year and dropping now.

Lake Billy Chinook:   No new end of June reports.  The earlier reports from LBC is that kokes have been scattered, and down deep.   Effective colors include purple, pink, orange and brass.

Crooked River:   The Crooked River is fishing well.  It is kind of low, with flows in and around 100 CFS.

PMDs, BWOs, midges and caddis are all active right now.  Reports are that the smaller trout are taking flies on top, and the larger trout are being caught with nymphs.

Some anglers have been catching big browns again on Wickiup.

Lava Lake/Little Lava Lake:  Both Lava and Little Lava have been stocked this past week.  These lakes should start improving now.  Look for the callibaetis hatches with the coming warm weather.

However, there are early reports of some slow fishing from Lava Lake, with no other reports in yet. Checking in with some regular Cascade Lakes anglers who have been at other nearby lakes.

Three Creek Lake:  Three Creek Lake is now open and accessible.  Early reports are good, and the lake is due to be stocked next week with 4000 legal trout and 200 trophy trout.

This week’s report from Gorge Outfitters Supply (541-739-2222) in Rufus, is that walleye fishing is super hot right now, especially very early in the morning.   Worm harnesses and bottom walkers are all working well, with pink being the hot color.  Anything shiny and bright is preferred this week.

Bass fishing has been great – many bass are being taken on night crawlers or grubs.

Shad fishing is also hot – lots of anglers are now picking up shad.  Shad killers in blue or chartreuse are working great.

Bass fishing has just okay, heavily effected this past week from a muddier John Day.

No real walleye reports  – anglers have been off the water.

Summer has come in with high temperatures and good options for your fishing pleasure! There’s lots of stocked trout in many of the lakes and ponds with Lost creek

and Applegate among my favorites around Medford area. Coastal lakes and streams have plenty of fish that have been stocked earlier this year and typically don’t get too much pressure.

Coho Salmon season out of Brookings opened up with good numbers of fish being caught when the winds cooperated and appears to be a good year so far. Chinook salmon opens this Saturday and is expected to be good as well but might be a bit wind choppy.

Bottom fishing is still excellent from Brookings on up to Winchester bay!

Spring Chinook on the lower Rogue is dwindling as the fall run is just starting to show as more and more boaters are working the bay now and should progress. The Upper Rogue is seeing some Springer action as well as some summer run steelhead. Good steady flow of 3000+ cfs has kept the water flow good and cool for these fish to get up to their spawning grounds. The salmon fly hatch is also under way and fly fishers are having a good time.

The warm and soon to be HOT weather with usually taper the trout bite but enhance the bass and pan fish bite so don’t forget the small ponds to take the kids out for a fun time.

I just came back from a “trip of a lifetime” with some fishing buddy’s up in a remote area of Vancouver Island BC……. it was amazing and my 3 freezers are completely full! I’ll try and do a pictorial story in next week’s report.

The WDFW server is down this week, therefore no creel reports are available. By the time you read this, retention of adult Chinook on the Columbia will have closed. Steelhead are beginning to show in worthy numbers throughout the region.

The following rule change was announced by WDFW: From the mouth to the overhead powerlines below Merwin Dam: Effective June 17, through July 31, 2022. Salmon: Daily limit 6; up to 2 adults may be retained. Release all salmon other than hatchery Chinook.

If you are heading to Woodland and forgot your bait, the AM/PM on the corner of CC St. and Lewis River Road are now carrying coon shrimp.  They apparently also have more fishing tackle and bait supplies in the works.

The gauge level at Ariel has lowered to 3.25ft and trending lower. Water flow is dropping and is currently 4,000cfs. However, the continued higher levels of the Columbia are still backing up into the Lewis. The water level gage in Woodland is high and indicates 16ft.

Today, Wednesday I took a drive up the Canyon.  Fishing Pressure was light.  There were no trailers at the Modrow Bridge launch at 10:00am. No Angler success reported by WDFW. Reminder that the Kalama is open through July 31st for adult hatchery Chinook and Coho retention. There are some really chrome steelhead being picked up for those putting in the effort.

No WDFW angler check data available. They did return the Cowlitz River fisheries to permanent rules.

Action: Restores the salmon angling rules for the Cowlitz River to those in the 2021-22 Sport Fishing Rules pamphlet; all other permanent rules remain in effect.

The Wind River is open until further notice from the mouth to 800 yards downstream of the Carson Fish Hatchery. Before going check the WDFW website for daily catch limits, other rules and any emergency closure notices.

Drano Lake is open until further notice in the waters downstream of markers on the point of land downstream and across from Little White Salmon National Fish Hatchery and upstream of the Highway 14 Bridge. Before going check the WDFW website for daily catch limits, other rules and any emergency closure notices.

The Klickitat River from the mouth to Fisher Hill Bridge and from 400 feet upstream of #5 fishway to boundary markers below Klickitat Salmon Hatchery is open daily until further notice. Before going check the WDFW website for daily catch limits, other rules and any emergency closure notices. Shad fishing is still bananas up at the dam and throughout the gorge.

Swift should fish great with about 1oz-3oz of lead and 90ft-150ft back with Wiggle Hoochies.  Larger trout action is picking up in the eagle cliff end of the reservoir.

Here’s a handy informational link from PacifiCorp for the Lewis River Reservoirs.  All three reservoirs have stayed about the same level as last week. Swift and Yale levels have remained constant for the past fourteen days.  Currently as of Wednesday June 22nd the levels are Merwin: 236ft, Yale: 478ft and Swift: 999ft.

Reports currently have limits coming at 25 to 45 on the downriggers and out 75ft with 3oz of weight without downriggers. Super short leaders (8”) seem to be working the best.

Jim Milanowski with Looney Coonies says summer Steelhead catching is starting to pick up in the lower river. As the water clears the steelhead fishing should improve. I’m looking forward to hearing Jim’s reports for Steelhead as the summer progresses.  He’s a master of fishing the gorge for them and will be offering some reports for us.

Horseshoe Lake – Fishing pressure was heavy this past weekend, in part due to the Woodland Planters Days celebration.  On June 15th WDFW stocked the lake with 2,000 brown trout.

Kress Lake – I stopped by there today. There were 3 boats and probably a half dozen bank fisherman.  No catching happening while I was there, although one pontoon fisherman told me he had good luck yesterday.

Battle Ground Lake – A beach warning has been issued due to increased levels of E. coli bacteria; the beach will be sampled again on 6/21/22.  This doesn’t bode well as the beach will only get busier with this warm weather.

Klineline Pond – NO REPORTS and no health restrictions.

Lacamas Lake – There is a severe algae bloom right now, but bluegill fishing is getting better.

Vancouver Lake and Lake River System– Clark County Public Health has not updated the E-Coli closure from last week. People who fish at Vancouver Lake should continue to take precautions to avoid water contact and should thoroughly clean all fish and equipment.