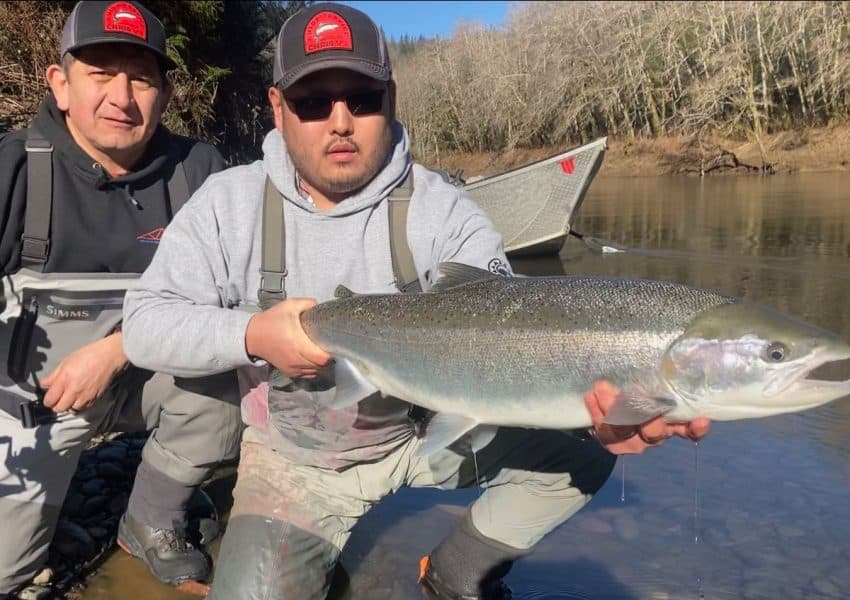 Portland/Metro Fishing Report – With the Willamette falling and in good color, interest is already brewing for a January spring Chinook. Although there’s been two confirmed spring Chinook from the Clackamas River, none have been confirmed from the Willamette as of this writing. That will likely change by the first or second week of February.

Columbia River anglers have a ways to go before good catches of spring Chinook happen there. Meanwhile, sturgeon catches have been good enough in the Bonneville Pool to warrant a closure following Saturday’s effort. The Dalles and John Day Pools will remain open under their respective regulations.

Steelhead are starting to show in better numbers on the Clackamas River. Water conditions for this weekend look promising, consider a later start when air and water temperatures improve.

Avid angler Jeff Stoeger reports, “”Hello All. The hatchery has received 251 hatchery fish and recycled 155 fish back into the river at Lewis and Clark Park. All these recycled hatchery fish will have their right gill plate hole punched. There are good numbers of fish in the entire river, from the hatchery all the way down to the mouth.

North Coast Fishing Report – Steelhead anglers on the north coast have been challenged by low, clear water conditions, just as we enter peak steelhead season. A weather change would be most welcome, there’s a lot more steelhead to come.

The Wilson and Nestucca systems will remain prime targets for those seeking a take-home option for broodstock (hatchery) steelhead) but other larger systems, such as the Nehalem and Siletz are fishing decent for wild steelhead, with little other competition on most days.

Smaller, early season streams are very low and clear, harboring spawned out steelhead for the most part. These systems, such as the NF Nehalem, Necanicum and Highway 30 systems will provide sporting biters, just poor table fare for the most part.

Estuary crabbing remains fair with a calm ocean providing the best opportunities for sport crabbers. An east wind influence has finally provided a window of opportunity for bottomfishers to take advantage of.

A great set of razor clam tides will grace north coast beaches this weekend. A calm surf will contribute to robust digs.

Rain and mixed precipitation will return to the region starting on Sunday and through the first few days of next week.  Maupin and areas of the high desert around the Lower Deschutes look to remain dry.

Lofton Reservoir:  Likely iced over for the season.

Chewaucan River:  Cold water and starting to ice over for the winter.

Krumbo Reservoir:  Fishing well in November.  No new December reports, but colder weather may start icing the reservoir over.

Williamson River:  Closed for the season.

Check out Glenn’s detailed report with much more information and forecast in this week’s Member’s version.

After some great days of winter steelhead fishing following the last big rain event, most if not all rivers and streams are low, clear and cold. The bite has certainly dropped off even though there are decent numbers of fish. A “pray for rain” chant is back in the air to help spur some much needed rain.

I took a buddy out on the 2022 inaugural drift boat float from Chinook park to Schroeder park last Saturday with some high expectations of catching some winter chrome on 3 new “fish catchin” fancy plugs that came recommended by a local guide….. we beat the river to a froth in every stretch and seam with no action. We finally got 2 1/2 pounders (hatchery) on worms n corky side drifting. Some days it’s lots of action while other days it just a boat ride😉

Winter steelhead action on the lower and mid Rogue has been slow as the river is getting pretty low. Nightly temps this week into the mid 20’s have kept the river around a chilly 40 degrees. You’ve got to get your presentation (of any kind) right in front of the fish’s nose to hopefully cause a bite. Small baits and longer leaders help to not spook fish.

The Chetco has reported good numbers of fish in the river but low water is making it tough on drift boaters making their way through some of the skinny sections.

The smaller rivers and streams such as the Elk, Sixes, Coos, Millicoma, N. Umpqua and Coquille are way low and clear to make an effort to fish right now.

The main Umpqua has been producing some steelhead and since there are several tributaries dumping in, the flow is lower but still fishable. The South Umpqua has been seeing some nice fish caught but is getting skinny too. Check where the guides are working!

Steelheading has been good this week, with late runs building up well. Bonneville Pool sturgeon will close as of January 30, and walleye are biting in the Gorge.

Local rivers with late runs of steelhead are already fishing well, while the early runs are finishing up strongly. Local trout fishing has been excellent this week, with most lakes giving up limits fairly easily.

The Bonneville Pool is closing this weekend, after fishing improved quite a bit in late January, and the quota is almost used up. The John Day and The Dalles Pools will still be open.

Walleye fishing has been excellent the past week in all three of the Gorge pools.

Lewis and Washougal Rivers Fishing Report—The Lewis River is still giving up some hatchery steelhead, with fishing rated as fair to good. Bobber and beads are dominating the game, although a few anglers are plunking or drift fishing. The river has dropped and is in excellent condition. Boat anglers are doing well from the golf course up to the deadline at Merwin Dam, while most bank anglers are targeting the hatchery area. Wild steelhead are starting to show up, and will eventually replace the early run of hatchery steelhead, which will end soon.

The Washougal has fished very well since it dropped into condition after the holiday storms. Anglers are getting bit with bobber and beads or jigs in the lower sections, and those anglers with access to the upper river are also doing well. Some anglers are drifting baits, or fishing plastic worms in the high water. The access along the Washougal River Greenway, and other points in the lower river, are where most of the fishing is taking place.

Merwin and Yale Lakes Fishing Report—The water level at Merwin Reservoir has been dropped for yearly maintenance, and the lake’s boat launches are unusable. The lake is not expected to be brought back up to full pool until early February. The lake was drawn down starting January 19, and there are no places to launch at the lake right now. Yale Lake is fishing fair to good, although the fish are smaller than at Merwin. The fish are near the surface, within the top 20 feet, so flat-line trolling or fishing with just a little lead has been the most effective. The fish are taking scented natural-colored corn fished with a hootchie behind a kokanee dodger.

Cowlitz and Kalama Fishing Report—A few steelhead are starting to show in the upper Cowlitz, although there are still only a few anglers chasing them. The numbers of steelhead showing in the hatchery trap has climbed a little. Last week, Tacoma Power employees recovered 15 coho adults, one coho jack, and 25 winter-run steelhead adults during four days of operations at the Cowlitz Salmon Hatchery separator. Like everywhere else, the Cowlitz is mostly a bobber-dogging show, with beads or small bits of salmon eggs working the best. Boat anglers are targeting the first few miles below Blue Creek, and bank anglers are gathering near the mouth of the creek. A few bank anglers are drift fishing, but most are trying bobber presentations.

Check out Terry’s detailed report (he crushes it every week!) and forecast in this week’s SW Washington Member’s version!

Receive these Oregon fishing reports in your email
on Thursday nights by signing up here.