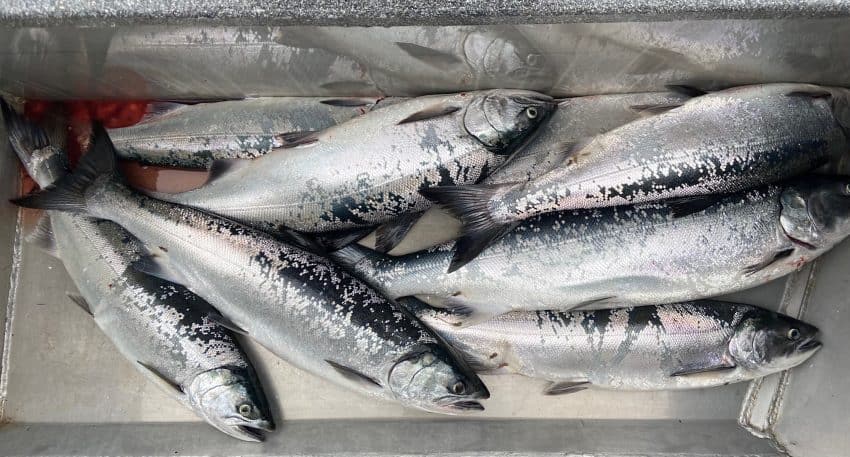 Summary for the week of June 9

With the Columbia closed, anglers will now refocus their efforts on the lower Willamette River. The spring Chinook bite should last a few more days, but time is ticking on this fishery, especially since numbers of summer Chinook, often intercepted in this fishery, are starting to slide.

The early morning spring/summer Chinook bite remains good at the mouth of the Willamette River however, fish are being caught every day.

From Harrisburg, to Corvallis, to Albany: A great option for warmwater fishing. Evening fishing for smallmouths, especially in the slow water sloughs. Flyfishing with leech patterns and top waters is especially good. Lures including all kinds of topwaters, Rebels, Rapalas are fishing great in the evening just before sunset. Sloughs just downstream of Harrisburg are filled with smallmouth bass.

The mainstem McKenzie has been stocked over the past week. The McKenzie has dropped rapidly over the last week that does not bode well for maintaining temperatures that are good for trout fishing. The upper reaches of the McKenzie are accessible by the McKenzie River National Recreation Trail above McKenzie Bridge and Rainbow.

The creel report, as pathetic as it was, is over on the Clackamas River. Believe it or not, spring Chinook action was actually better than it was in 2020. Well, it closed in 2020 so we have that going for us.

The last check (week of June 21 – 27) creel checkers saw 5 hatchery Chinook kept, and 5 wild Chinook released. .
Summer steelhead action hasn’t been much better, despite a good surge early in the season. Nine boat anglers and 17 bank anglers didn’t catch anything this week that was checked.

Again, it’s been slow for both summer steelhead and spring Chinook as of late, with no expectations that it will improve in the near future.

Avid angler Jeff Stoeger offers up this report. Jeff writes, “I hope that everyone had a safe 4th of July. Well, this week’s report has the river turning to glacial green from milk chocolate brown. The weather forecast is for the weather to temps to run in the mid to upper 80’s during next week and the evening temps dropping down into the mid 50’s. The river should run glacial green until we hit the upper 80’s to 90 and visibility about foot and half.

Long-awaited coho catches improved on most central and north coast ports this week. Newport, Depoe Bay, Pacific City and Garibaldi all reported drastically improved catches this week. Ocean weather is going to blow up from a north wind perspective so plan your trip accordingly. You don’t want to be bucking your way back to port with a stiff wind in your face.

The Newport commercial halibut fleet reported dismal catches this week, not a good sign for the sport fleet seeking the same in both the nearshore and all-depth fisheries coming up, assuming we actually get to fish those openers based on weather conditions. There’s a lot of quota still on the table.

Ocean crabs are molting big time. Bay crabbing might be the better option with the upcoming wind forecast.

Bottomfishing remains great but lingcod are becoming harder to find.

If you have not seen it, there is an hour webinar, Tips for Safely Fishing the Ocean Outside the Columbia River from June that is a must see if you are heading out there.  It is FREE and provides valuable information. See it here

After a very brief respite, temperatures climb again for the weekend with forecast highs at or near records into the 90s and even the triple digits in a few locations such as the Lower Deschutes canyon and eastern parts of the Columbia Gorge. The Gorge will also have weekend winds!

Lower Deschutes River: The Lower Deschutes continues to be hot. Warm Springs and Maupin area weather will reach the lower 100s going into this weekend. If you must fish the Lower Deschutes, then go up high in the river towards Mecca Flats. The temperatures in this zone are lower. Temperatures have risen in this stretch as PGE again changed the blend of topwater and bottom water coming out of the reservoir – with temperature in and around 60° F.

The Rattlesnake fire started on the Warm Springs reservation last week and jumped the river. Although now it is well contained, at 90% or better containment, it did burn through the South Junction Campground. Be careful if you are on the Lower Deschutes.

The Middle Deschutes is fishing best in the early mornings. Caddis, purple haze, humpies all are working. With the forecasted temperatures this weekend, this water is likely to become warmer. Nymph with Perdigons, Micro Mayflies and Copper Johns when the hatches are not coming off.

Crooked River is best fished now in the mornings only, if you must fish it. The Crooked is coming out of the dam at 45 F and heating to 73° F at Smith Rocks. That said, there are evening caddis hatches.

Spring fed Fall River will be a good weekend option, amongst the ponderosas and cool water. Nymphing has been most effective; try small 2-bit hookers, perdigons, zebra nymphs.

Like many area waters, early morning and the evenings will be best for fishing, especially this weekend.

It was a hot 4th of July weekend as many people headed to the coast to beat the heat and were treated to some good catches on the Rogue Bay in Gold beach. As mentioned in my last report, Troy Whittaker of Troy’s Guide Service fished the bay with good success and thought it was only going to get better….and it did! If salmon anglers got on one of the boats from Brookings Fishing Charters (Brookings), Limits of Chinook and or Coho were had this week also. Well, look to be summer salmon fishing is in full swing… go get em!

Grants Pass Pro-guide Troy Whitaker of Troy’s Guide Service (541-761-0015) – Troy has been fishing the Rogue Bay in Gold Beach lately as the weather has been hot in the valley. Rogue River flows have reduced dramatically the last week and the water temp is 70+ degrees making the current Summer/ Fall Chinook that are starting to come into the bay will hold.

Hatchery coho may be kept the entire season. Chinook (wild or hatchery) may be kept June 19-Aug 15. The daily limit is two salmon.

The season out of Crescent City and Eureka runs June 29-Aug. 1.

Andy reports that the salmon bite was “good” this week and is disappointing that the winds will be a big factor of whether or not his fleet will be able to get out this weekend. Chinook catches were at least 1 fish per rod with some Coho mixed in fishing in the 12′-20′ top zone with anchovy near the buoys in 100′ of water trolling anchovy. Consistent limits and coming in early was the norm to several of his boats this week.

The Coho bite that had slowed some as Andy suspects the schools of fish have migrated north towards Coos Bay had picked up. Wind chop could keep halibut and bottom fish anglers closer to shore

Surf Perch – Red-tail surf perch fishing is great along the Rogue sand bar using small sand crabs and or rock shrimp. If you’re wanting some great action and table fare, Andy recommends fishing for these can be very rewarding.

Tony said that Coho fishing out of Winchester Bay was “off the hook” earlier this week with one charter boat kept 8 fish out of 22 caught within 2 hours!

Speaking of crabbing, people crabbing in Winchester, Charleston, Coos and Bandon systems are getting some keepers and are still hard shells.

Galesville Reservoir– Is providing some good early morning catches before all the boat traffic. Fish are down deeper toward the dam.

Diamond Lake-Trout fishing has been good in the mornings and late evenings which has been producing some very nice 16″-24″trout this year. Try switching between bait and lures if one method isn’t producing.

CHETCO RIVER-Trout fishing is open, but with low and warming water conditions, anglers will want to look for cooler water in deeper pools and near tributary mouths.

COQUILLE RIVER BASIN-Boat anglers are still catching a few shad on the mainstem Coquille River near the town of Coquille. Anglers have been catching striped bass in the upper end of tidewater all the way downstream to Riverton and are caught in low light conditions or in the dark.

Springer fishing in the Rogue Bay produced a decent bite among the boats targeting Chinook earlier this week.

Be sure to CHECK the regulations!

Summer Chinook, sockeye, and steelhead fair in the Columbia, while shad still strong. Ocean salmon improving, but for smallish fish.  Trout fair to good in highland lakes, while steelhead showing well in Cowlitz.

Salmon and steelhead are biting well in the lower Columbia, but catches near Vancouver remain fair at best. It’s also fair at best up near Bonneville, but anglers up there continue to have a ball with the sizable shad run.

Tributary steelhead fishing is good in the Cowlitz, okay in the North Fork, but poor elsewhere.

High country trout are still biting early and late in the day. Panfish and bass have picked up after the hot weather passed in most local lakes and waters.

Lewis and Washougal Rivers Fishing report—Steelhead are showing in better numbers in the North Fork Lewis, where the latest creel found three boats/five rods keeping two steelhead. According to John Thompson of Sportsman’s Warehouse in Vancouver, (360) 604-8000), there are steelhead being caught in the river, but not anywhere near as many as normal.

The Washougal remains low and fishing is still poor, and very few anglers are trying the little river. A good freshet is unlikely anytime soon, but it is what is needed to improve the fishing.

Merwin and Yale Lakes Fishing Report– Fishing is described as fair to good in both lakes by Stacie Kelsey of the WDFW Inland Fished Program, although Thompson reports that competition is fierce at Merwin. The hot weather has passed, but sunny days are seeing a good bite in early morning and late day only. Most of the anglers doing well are targeting the kokanee in 40 feet of water or deeper.

Fishing is best in the upper river below the Blue Creek. During the latest creel above the I-5 Bridge, 20 bank rods kept six steelhead, indicating an improved bite for bank anglers. 15 boats/50 rods kept one Chinook and 40 steelhead.

The Kalama River is giving up a few summer steelhead in the river’s lower sections, according to Thompson. There has been a good bite on pulling plugs, with the U-20 Flatfish reportedly drawing bites in red.

Klickitat River Fishing Report—The river is still off-color, according to Carl Coolidge of the Klickitat Canyon Market, (509-369-4400). He said the river turned brown, “like rolling mud,” following the record heat wave. The river is now a gray color with about 6 inches visibility. Very few anglers have given the river a try, although summer steelhead should now be entering the river in decent numbers.

Goose Lake is fishing well early and late in the day for trout, and other high country lakes are providing a good trout bite.

You can read Terry Otto’s recent article on ocean salmon fishing off Long Beach in the Columbian Newspaper here.