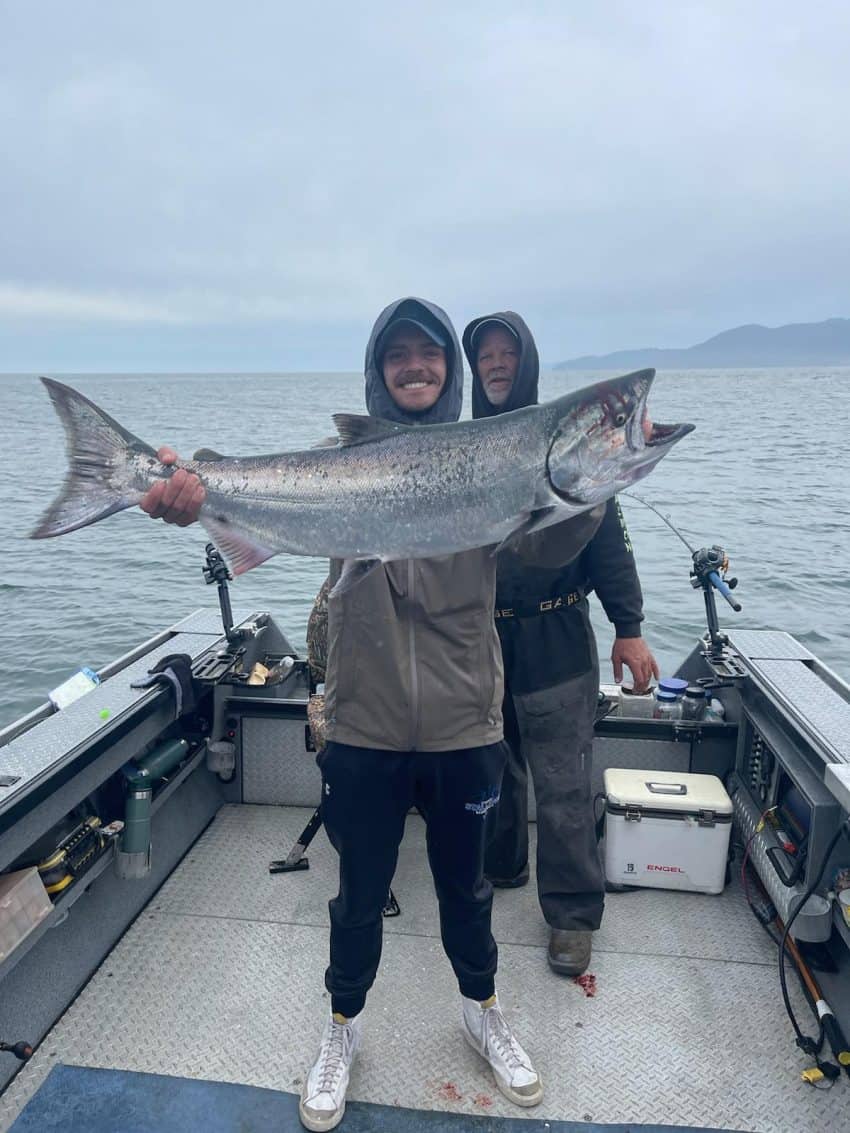 Photo: Pro guide Rob Gerlitz (503-812-4950) behind caught Utah angler Korben, his first salmon of his life. The crew was taking advantage of the abundant Chinook presence out of Garibaldi right now. Call Rob to book one of these trips NOW!

Portland/Metro Orgon Fishing Report – With the recent high water event, anglers on both the Columbia and Willamette Rivers will be challenged for success for what’s shaping up to be a robust return of spring and summer Chinook. The Willamette is on the drop and may fish early next week, but weekend fishing is likely to be challenging. Shad fishing too, despite being in peak season.

The Columbia has now transitioned to summer Chinook, with the last day of the season being June 22nd. If you’re versed in high water strategies, you have the advantage. Bank anglers tend to do best in high water conditions as well.

Clackamas River anglers posted a good (last) week for summer steelhead. Bank anglers did particularly well and with the high water over the weekend, they stand the best chance under these water conditions too. The season’s first spring Chinook were tallied last week, it should be another fair week for springers despite a likely poor return again this season.

Avid angler Jeff Stoeger reports, “Hello All, what a week we’ve had. The weather is about to set a record for one of the wettest months on record. As for this time we are 5th wettest and could go higher on the list with more rain forecasted. Over the weekend we saw the river go up over 14 ft. on Saturday and is currently running at 11.65ft. The river was light chocolate brown and will take a couple more days before it turns steelhead green. The river has lots of trees and other various debris and at the writing of this report, there was a tree blocking three quarters of the river at the Troutdale Bridge. The river will slowly clear and if you plan on fishing, I would fish close to the river banks for fish will hold and move in clearer water. I also recommend that you wear your floatation devices when floating the river to protect yourself and friends.”

North Coast Oregon Fishing Report – It is a good time of the year to be fishing on the Oregon coast. Typically there are lots of options, with the ocean salmon fishery going gangbusters, it’s a pretty special place to be right now.

Most people are highly focused on the spring Chinook return back to Tillamook Bay this time of year. And although that’s nothing to shake a stick at, the ocean salmon fishery, largely targeting California stocks of fish offshore, is flat out awesome. Once in a while we get these dense populations of feeding Chinook off the North Coast, a clear indication there is a lot of forage fish available for these fast growing adults.

Pro guide Rob Gerlitz (503-812-4950) has been scoring good results. He had out a father/son combo the other day, netting this whopper in the offshore fishery:

Meanwhile, back in spring Chinook land (Tillamook Bay), action has been fair but with all the high water in the district, fish aren’t holding all that long in the bay or tidewater reaches of the Trask River.  It’s also hard to get around with the magnitude of minus tides happening at this given point.

And speaking of river fishing, it’s been pretty good. It’s unusual (if you haven’t heard that before) to have such good river conditions for anglers to fish this system this time of year. Catches, although not consistent, have been good on the Trask River from Cedar Creek downstream.

There are also summer steelhead available on the north coast, and again, good water conditions are playing a factor in success. Three Rivers, the mainstem Nestucca, the Wilson and Siletz Rivers are all peaking for fresh-run summer steelhead right now.

Halibut fishing is fair, best out of Newport, and bottomfishing remain excellent out of most ports. Ocean crabbing is good, bay crabbing was challenging during this week’s magnum tide exchanges. That made for good clam digging however.

The Lower Deschutes dropped after a weekend spike and is now running at 3960 CFS in Madras and 5520 CFS at Moody.  The White River spiked up and introduced a lot of muddy water on the weekend, and is somewhat receding now.  Water access is good.

Temperatures on the lower portions of the river are in the 55 to 57 range at Madras and 58 to 63 degree range near Moody.

Caddis are active on the warm days and becoming the dominant insect anglers should focus on.  But, the PMDs and PEDs are becoming important, so there is dry fly-topwater action on the Deschutes with PMDs, PEDs and caddis.

Middle Deschutes River:  The middle Deschutes did spike up last weekend and was off color, but flows have receded back to where they were and is clearing.  There is a mix of PEDs, PMDs, and some caddis on the river from Bend to Steelhead Falls.

Lake Billy Chinook:   Latest from LBC is that kokes have been scattered, and down deep.   Effective colors include purple, pink, orange and brass.

Crooked River:   The Crooked River is fishing well.  It is kind of low, with flows in and around 140 CFS.

Good and consistent caddis hatches are happening now on the Crooked.  Reports are that the smaller trout are taking flies on top, and the larger trout are being caught with nymphs.

Fall River:  Fishing well from the hatchery to the headwaters.

Caddis have been active, as well as some PMD and midge activity.  In addition, terrestrials like ants and beetles are taking trout.  There has been an occasional green drake hatch.

Fall River was stocked during the week of May 9 with 1000 trophy trout, and was stocked again this past week.

There’s plenty of fishin action to be had right now….. the ocean (when calm) is producing nice limits of rock fish along with some halibut (which is now open), and surf perch. Cutthroat trout and stocked trout are still in abundance in the coastal lakes. The Rogue is maintaining Spring Chinook action above Shady Cove as well as on the Lower Rogue from Agness on down. Most all Southern Oregon lakes and streams are getting the attention of trout, salmon, steelhead and bass anglers alike…. there’s a good variety to fish for right now!

The Rogue valley action is primarily for Springers that are being caught mostly up river from Dodge Bridge to McGregor Park. Some Summer run steelhead are in and with trout season open, more will be caught. The flow has increased to over 4000 cfs at Grants Pass so trying to anchor and or back troll for salmon or steelhead is a bit of a chore for drift boats. Warm/ hot weather has gotten the bass and panfish bite back on at Lake Selmac and other Rogue valley ponds. Trout fishing continues to be good at Lost Creek and Applegate lake where there’s lots of hold over and recently stocked fish to be caught and both lakes are at peak high water.

The lower Rogue springer fishing had a good bite on late Saturday as the recent rain deluge got the river flow and turbidity higher. It’s now waned as of Wednesday, but hopes are for a last “hurrah bite” before the Fall run start in July.

The ocean looks to be conducive for weekend (finally) for bottom fish and halibut. Anglers earlier this week have been scoring excellent catches of rock fish and halibut. The coastal lakes have been stocked with lots of trout and will fish well until the water gets too warm and sprouts up the weeds. Surf perch fishing and crabbing is still going good especially around Charleston and Winchester Bays. Jetty fishing is also a good option although maybe not this weekend depending on weather.

Good flow and cool water on the North Umpqua, catches of Spring Chinook has been “surprisingly good”. Shad are in the main Umpqua now in good numbers and Chinook catches are fair.

I will be up in Canada at Winter Harbour next week for a rescheduled male bonding fishing trip, so I’ll be too busy catching Chinook, halibut and bottom fish to get out next week’s report. Wish me luck.

COQUILLE RIVER-Small mouth and striped bass fishing has picked up in the upper main stem. When the weather stays warmer after this weekend’s storm front and flows decrease, the bite should be good. A temporary regulation allowing anglers in Coquille River system to use spears and spear guns to harvest small mouth bass. Traditional rod and reel anglers can also use bait throughout the river system.

Middle Rogue – Trout season is open for hatchery fish ONLY. Spring Chinook catches have increased slightly as flow and decreased water temp has increased angler pressure. A few fish are being caught mostly by boaters working the deeper holes and seams with Kwikfish wrapped with anchovy and back bouncing roe. These fish don’t usually bite well in the mid section until further up as they have more pressing things on their mind.

Upper Rogue- Spring Chinook fishing has picked up well for both bank and boat anglers. Angling pressure has increased along with catches of Chinook ranging 15-25 pounds. The condition of these fish has been very good too as the river flow has been good enough to allow the fish to swim hard and fast up to their spawning grounds.

SMITH RIVER, Umpqua system- Fishing for salmon, trout and steelhead is closed but is open for stripped bass. Trout season is open and should be good. Shad are coming in as well.

This site uses Akismet to reduce spam. Learn how your comment data is processed.