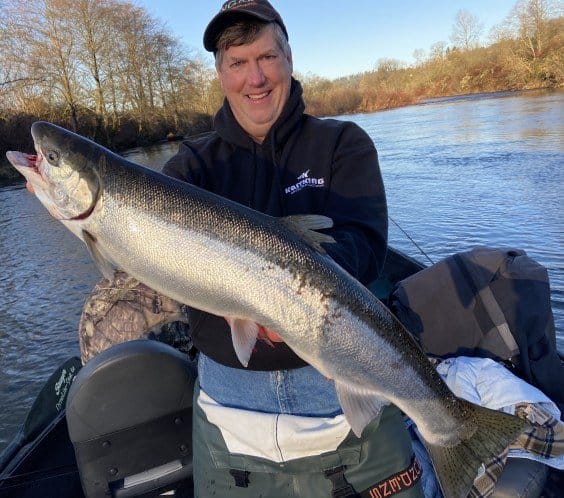 Portland/Metro Fishing Report – The Willamette is finally shaping up to produce some steelhead, maybe even the season’s first spring Chinook as flows drop and water clarity improves. This should be a fair weekend for those that are willing to try.

Sturgeon fishing should improve as well, but remains catch and release for the foreseeable future.

The Willamette’s first sport caught spring Chinook is not far off, certainly by early February.

The season’s first spring Chinook has bypassed Bonneville Dam but we’re still months away from any type of productive fishery.

Hatchery winter steelhead should be making their way to the Clackamas River, where Meldrum Bar anglers will have a shot at them prior to entry into the Clackamas. It’s been a fair season to date and numbers at Willamette Falls are climbing, it looks like the 2022 return will easily out-pace last year’s adult return.

The Clackamas itself is faring better this year than the last few. Broodstock collection is ahead of last year and anglers had a fair week under improving conditions. It’ll only get better from here, and after a brief spike, river conditions will improve by Sunday and well into next week.

Avid angler Jeff Stoeger reports, “”Hello All. Well, there was some fair to good action this last week depending on who you talk to. The lower river below Dabney was packed with bank guys and sleds and drift boats. Side drifting and bobber doggin’ has been productive using beads and yarnies with eggs. Bobber and jigs with shrimp were just as productive. The river was on the drop and smaller presentations were the ticket for getting fish to bite.”

North Coast Fishing Report – North Coast steelheaders found fair action for broodstock fish on the Wilson and Nestucca systems. Water conditions have been ideal for most of the week, but on the shoulder part of the season, good action doesn’t last long period

The Wilson and Nestucca Rivers will become the primary targets for winter and spring steelhead anglers. Broodstock fish, that make up the bulk of the hatchery opportunities on these systems, are just now coming into peak season. Both systems produced fair results this week but the best action only lasted a day or two after the last high water event late last week. Saturday and Sunday produced the best results on the Wilson, Sunday and Monday on the Nestucca.

Pro guide Rob Gerlitz (503-812-4950) reported having about a dozen opportunities on Saturday, landing 6, with three being wild along with three broodstock hatchery fish for the home pack. He took his son out, age 5, on Monday, catching him his first steelhead which clearly made an impression. (See photo above).

As predicted, the dropping river systems after a big long awaited rain event brought in good numbers of winter steelhead into all typical steelhead rivers and streams bringing steelhead anglers a “Winter Steelhead Delight” ??. Excellent catches on the Chetco earlier of 3-4 fish per rod was reported by pro guide Andy Martin (Wild Rivers Fishing) ?? If you didn’t get on it yet, you still have good opportunity for the weekend!

Winter steelhead numbers are increasing in the mid Rogue from Grave Creek up to Robertson Bridge with mostly wild fish in the mix. A few summer runs are still being caught although most are kelts. River flow throughout the system should be good for both bank and boat anglers into next week (although the upper is significantly on the low side of good). There’s been some catches in the Applegate but predominately wild fish that must be released…. hatchery fish are coming!

If you didn’t get a chance to hit the coastal “steelhead” rivers and streams earlier, good to excellent catches were reported from the Elk, Sixes, Chetco on up to the Coos system- Millicoma and Coos and North into the Umpqua system. The Elk and Sixes are pretty low now, so I’d hit the Chetco and up into the Umpqua systems for the best success.

Crabbing in the bays and ocean look to be an opportunity as well as bottom fishing for rock fish and lings are also on the menu for the weekend.

Surf perch are biting along the rocky jetty’s and sandy beaches too!

Rivers return to fishable condition, and steelheading is fair. Trout are once again biting in local lakes, and anglers are finally getting out to fish after weeks of disruptive weather.

Most rivers have come back into shape and should fish well this weekend, although we are in that quiet phase between the early and late steelhead runs, but fishing should improve over the next couple weeks.
The trout lakes have recovered from the effects of the winter storms, and the bite has improved. Most lakes were restocked with catchables recently, and the fishing is once again good. Watch for fresh trout plantings, as well as big broodstock trout and steelhead plantings HERE

Lewis and Washougal Rivers Fishing report—The Lewis River hatchery steelhead run is pretty much over, although the river still has a few early run fish available. The river does get a sizable wild run of steelhead, and they will be around for a couple months at least. Boat anglers have been doing well by bobber-dogging with beads or salmon eggs, and bank anglers have also been doing okay with bobber presentations, but the fishing is now beginning to slow.

The Washougal dropped back into shape and had been running at about the 6.5-foot stage, but by Thursday the river was on the rise again. Anglers have been finding a few steelhead in the lower sections of the river when it has been fishable. Most of the fish have been taken on bobber and beads or bait, but some fish are taking drifted gear.

Merwin and Yale Lakes Fishing Report—Both lakes are clearing out after being trashed by heavy rains and snowmelt, and the fishing is getting good again, according to reports from Stacie Kelsey of the WDFW Inland Fishes Program. Kelsey rated Yale as fair to good, and Merwin as good. The fish are near the surface, within the top 20 feet, so flat-line trolling or fishing with just a little lead has been the most effective. The fish are taking scented natural-colored corn fished with a wedding ring, spinner, or hootchie behind a kokanee dodger. With the improved conditions, most anglers are getting their fish with a little less effort.

Cowlitz and Kalama Rivers Fishing Report—The Cowlitz was pretty much un-fishable this past week, as a fresh landslide on the Tilton River threw muddy water into Mayfield Lake and the Cowlitz below it. That’s the word from Dave Mallahan of Dave’s Guide Service (360-201-9313). He did think the upper Cowlitz should be fishable by this weekend, since he noticed the Tilton had already started to clear out by the early week. Once the dirty water flushes through the system the river should be in good fishing condition. However, there have been few steelhead pulling into the river as yet.

The Kalama River fished well this past week after it returned to a good condition, but anglers are finding only fair fishing right now. The river is between the two steelhead runs, and that usually means a short lull in the action. Anglers are finding a few steelhead in most sections of the river, although boat anglers are fishing mostly the middle river drifts, while bank anglers are hitting the entire river, including the upper sections in the canyon

Sturgeon fishing in the Columbia River pools has been good, especially in the Bonneville Pool, where 355 (71%) of the 500 fish quota have already been caught. Anglers that want to fish this pool better get with it. The quota will not hold up for long. In The Dalles Pool 50 sturgeon (26%) have been kept of the 190 fish quota. Anglers have retained 17 sturgeon in the John Day Pool, or about 17% of the 105 fish quota.

Check out Terry’s detailed report (he crushes it every week!) and forecast in this week’s SW Washington Member’s version!