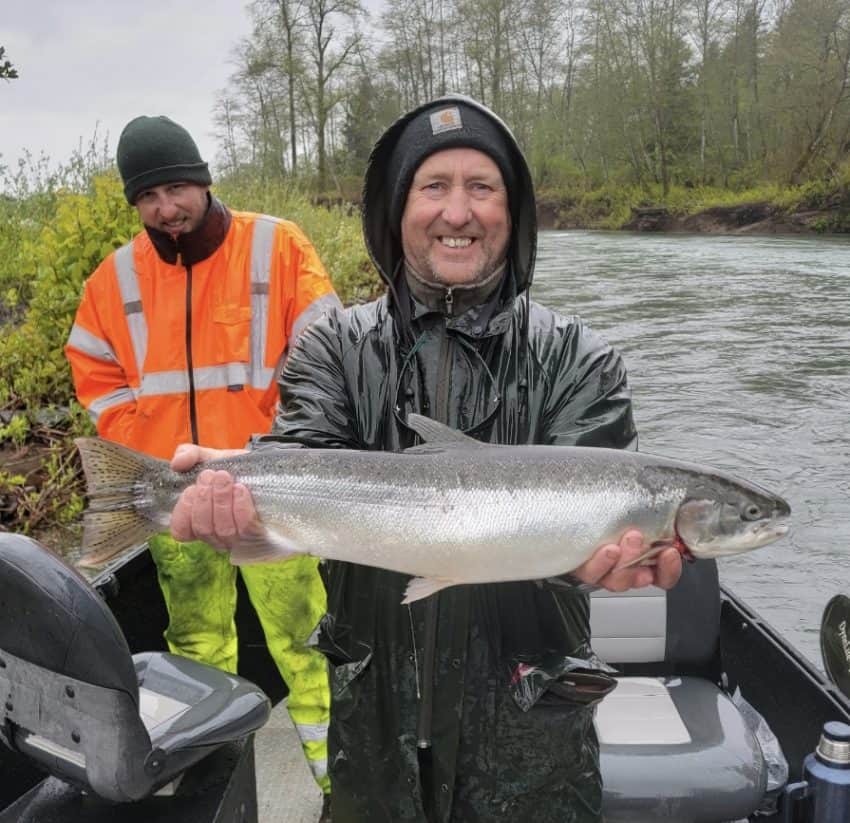 Portland/Metro Fishing Report – It won’t be long before the dogwoods bloom and catches are ramping up on the Willamette River with good catches reported in the middle river this week. The “temperature gauge” of the middle river is none-other than the Sultan of Sellwood (Coined by Bill Monroe) John Shmilenko. He’s a staple at Sellwood Bridge and has had a great week. Quoting him, “It feels like the old days!” John’s boat has tallied 13 springers in the Sellwood area, a reason to re-think the Oaks Park experience.

The Multnomah Channel had another fair week, but anglers fishing the Oregon City area struggled a bit more last week. The recent bump in water levels and turbidity didn’t seem to have a big negative impact on fishing, in fact, it may have helped. April showers bring May spring Chinook? I like the sound of that.
The upper Columbia remains open for spring Chinook, but catches there are typically just fair at best in the Bonneville and The Dalles Pools. Counts at Bonneville Dam continue to climb, with over 3,300 springers ascending the facility as of April 20th. There have been some caught at Drano Lake.

Sturgeon effort is dropping on the Willamette, and so are catches. It’s likely that these sturgeon are keying in on dying smelt, likely abundant in the mainstem Columbia right now.

North Coast Fishing Report – Despite my report last week, stating that the winter steelhead run was over, pro guide Rob Gerlitz (503-812-4950) put the hurt on them on Tuesday. Rob landed 6 fish, 5 of which were wild, but had a friend land 8 just a day or two prior to that. We’ve always known there can be some good April fishing, but that was ridiculous! All that action with NO ONE ELSE on the water!

Most north coast anglers are waiting for the arrival of spring Chinook, which can certainly happen by mid-April, but the bulk of the return starts in mid-May. No rumors of spring Chinook yet, but it won’t be long.

The ocean has offered up some great bottomfishing catches lately, but lingcod have been a bit more challenging to find. Sea bass and even Dungeness crab remain on the hit list, we just need a calm ocean to cooperate.

More trout stockings happening on the coast however. Be sure to check the stocking schedule if you plan on fishing this wonderful corner of the state.

Some local tributaries are fishing better than others, with the Lewis showing the best results for spring Chinook. Late-run steelhead are still active in some rivers, with the Cowlitz putting up good numbers for bank anglers.

Lewis and Washougal Rivers Fishing Report—The Lewis River has been in good condition, and anglers are finding a decent springer bite. During the latest creel survey, 49 bank rods kept two Chinook and released one Chinook. 28 boats/54 rods kept nine Chinook, three jacks, one steelhead and released two Chinook and two steelhead. Boat anglers are hover fishing with salmon eggs in the Meat Hole, while others are fishing eggs via bobbers, or bank-bouncing in the faster reaches from the golf course up to the hatchery. Some anglers are trolling herring in the lower sections of the river, above the fishing deadline at the mouth. Bank anglers are plunking in the lower river, and fishing bobber and eggs at Johnson Creek and the hatchery.

The Washougal River is now open for steelhead again, but there have been no reports on angler success. The river sees few springers, but the summer steelhead may start to trickle in soon.

Merwin and Yale Lakes Fishing Report—Merwin Lake turned over recently, and anglers are reporting seeing numbers of small kokanee floating dead on the surface. Fishing has been fair, even with the turn-over. The fish are still in the upper 20 feet of the water column, and flat-line trolling with dodgers and hootchies or spinners tipped with scented corn has been getting the kokes to bite. With the lake water mixing, the schools may shift to deeper water. Yale is also fair, but the fish there are smaller, so the crowds are less.

Dave Mallahan of Dave’s Guide Service (360-201-9313), reported that steelhead are moving into Blue Creek, even though the fish are now planted out at the salmon hatchery. Also, remember that the creek has been closed since March 16. Mallahan said the creek is full of steelhead, and they are pushing into the side channel where the creek enters the river, giving the bank anglers a good chance at them. They are mostly drifting for their fish.

The Kalama River is fishing fair for both steelhead and spring Chinook, with most of the catches this week coming from the middle and lower sections of the river. The latest creel found 60 bank rods releasing five steelhead. 32 boats/72 rods kept seven Chinook, four steelhead and released eight steelhead. Salmon eggs fished via a variety of methods are taking the springers. Anglers are back-bouncing eggs in the swift water, or back-trolling with diver and eggs. Some anglers are trolling herring or bait-filled plugs in the lower holes of the river.

Drano Lake and Wind River Fishing Report—Spring Chinook crossings over Bonneville Dam have increased to about 200 a day, although only 1700 had crossed over by Wednesday. However, more springers did show up this week at Drano Lake and the Wind River. At Drano the most recent creel found two bank rods had no catch, while 43 boats/84 rods kept nine Chinook and released one Chinook. At the Wind River, one bank rod had no catch. 4 boats/7 rods kept one Chinook. Most anglers at Drano are trolling prawn spinners or bait-filled plugs while the same baits are being trolled at the Wind.