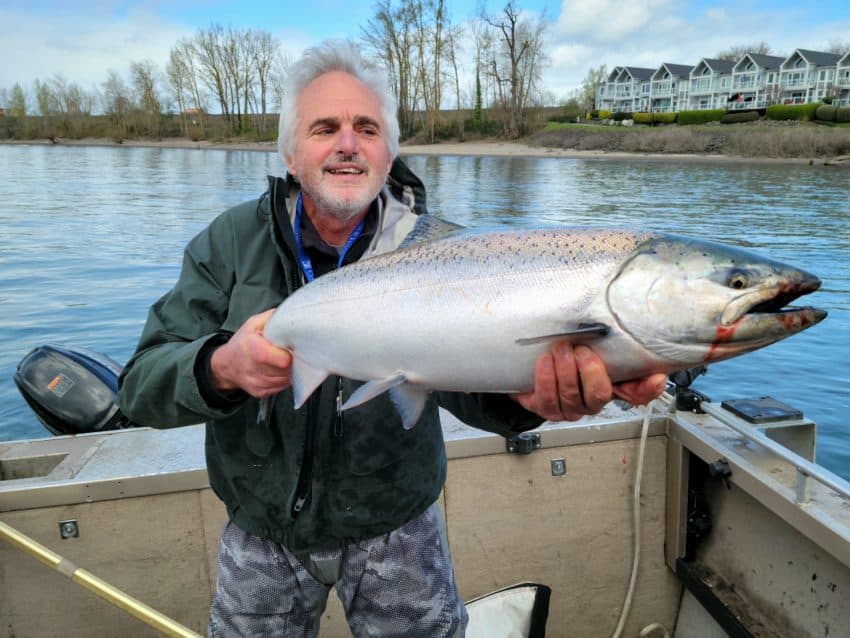 Portland/Metro Fishing Report – With just a few days left for mainstem Columbia River spring Chinook anglers, all hands will be on-deck as the run builds and catches improve. Dam counts are 5X stronger this year than last, and twice as good as the 10-year average so things are looking up! Springers are being caught throughout the lower river, from Bonneville Dam to Westport, Oregon, but sea lions are thick downstream of the Kalama River due to the abundance of smelt still in the system. That makes catching more challenging in that reach of river.

Subscribers reading the Columbia River section will learn a lot as we take a deep dive into which river sections produce the best catches for both bank and boat anglers. If you’re not already a subscriber, this info is worth its weight in chrome! Subscribe here and SW Washington subscribers also get access to the Columbia River report, of course! Don’t ya know, we promise a 100% guarantee if you’re not 100% satisfied with your TGF product!

Willamette anglers continue to see improved catches with catches finally out-pacing last year for the first time this season. It’ll only get better from here although a sharp river rise is in the forecast early next week, which will put springers off the bite temporarily. Bank anglers at Meldrum Bar are finally starting to see some spring Chinook and improving catches of hatchery steelhead.

Spring Chinook are surely in the system, but few and far between right now.

Sandy River Fishing Report – Avid angler Jeff Stoeger reports, “Hello All. This week we saw the river climb and stay on the high side until Monday, when it dropped to 10 ft. and stayed that way until Wednesday when it dropped below 10 ft. The river is running at ideal level and very clear. Heard of a lot of fishing pressure over the weekend with lots of boats and raft action from Dodge Park to Dabney Park.

The webinar you’ve been waiting for!!!

Fishing the Lower Willamette, from the Multnomah Channel near St. Helens to the St. John’s Bridge in Portland with Pro Guide Josiah Darr April 12th, 2022

Author and accomplished fishing guide Josiah Darr has been fishing the Multnomah Channel and lower Willamette for well over a decade. Join him for this informative webinar and learn the secrets to unlocking productive strategies for catching spring Chinook in the channel and lower Portland Harbor.

In this webinar, you’ll learn:

Join us and let us help you catch more fish!

North Coast Fishing Report – Although effort is waning, there remain a few quality steelhead on the north coast. April can be a productive time, even on years of low returns, such as this one. With another rain freshet approaching, steelheaders are likely to encounter one more good chance at late season metalheads on most north coast systems.

The Wilson and Nestucca will remain the best opportunity for take-home fish, but there may be a few still coming in on the Siletz and Alsea systems as well.

Wild fish should remain an option on rivers still open for catch and release opportunities. Check local regulations for April 1st closures before heading out.

The ocean will be a very bad option for the foreseeable future. Saltwater anglers did have a good week of fishing for sea bass and lingcod however and ocean Chinook fishing is now open. Although the sport effort remains low, commercial salmon trollers out of Newport and Garibaldi are doing quite well for deep-water Chinook, likely from California river systems.

Estuary crabbing remains fair and if it weren’t for a wicked set of breakers due on the beach this upcoming week, razor clam digging would be a good idea.

Now that the Chetco, Elk and Sixes are closed to steelhead, the Southern coastal opportunities are bottom fishing, surf perch, crabbing and the little coastal lakes for spring trout fishing…. all of which are good now (weather and seas permitting of course).

The Rogue and Applegate remain open for steelhead but is closed to trout angling until May 21st to decrease smolt mortality. There are quite a few fish in now with a mix of downer Summer run and fresher Winter fish.

The Umpqua system is still seeing some good steelhead catches and a few springers have been caught. Stripped bass angling has gotten increased attention lately.

Lakes and ponds have been getting regularly stocked with trout and is a great time to take the family out to have some fairly easy catches and fun. Since the weather has warmed, bass and bluegill are also an option.

Up towards the upper Southern coastal area, Charleston and Winchester bays are getting a good bite of bottom fish and surf perch as well as great crabbing. Winchester Bay Charters (Cole-541-285-7838) is now offering Striped bass trips!

Best bet for this weekend is the mid Rogue and the Umpqua systems for steelhead. They are low and clear, but fish are there. Lakes and ponds such as Lost Creek, Lake Selmac, Medco, Reinhardt, Empire and Saunders are good for spring trout and bass fishing. Weather and wind might be a factor for getting out for bottom fishing.

Spring Chinook catches improving in the Columbia, with fish being caught from Cathlamet to Bonneville Dam. Steelhead slipping past the peak, while trout fishing is improving.

Correction: Last week’s report incorrectly referred to the Washougal River as being open for steelhead, but the river closed to steelhead on March 16.

Steelheading in the tributaries slowed some this week, and the runs may now be past the peak.

Lewis and Washougal Rivers Fishing Report—Fishing in the Lewis River is slow, although a few Chinook were taken over the last week by anglers trolling near the mouth. In the Lewis proper, the latest creel found that two boats/three rods had no catch. The pressure has dropped off with the slow steelheading, and there have not been any reports of good springer catches yet. The river is in good condition, with the river running at about the 12-foot stage. The river is open for spring Chinook through the end of April, with the spring salmon run expected to arrive over the next week or two. The Columbia run has been late, and that could bode for a late arrival for the Lewis River fish as well.

The Washougal closed as of March 16 for steelhead. The river does not get a sizable spring Chinook run, so anglers are waiting for the summer steelhead to show.

Merwin and Yale Lakes Fishing Report—Fishing for kokanee has picked up at both lakes this last week as lake conditions and the weather both cooperated. The schools of kokanee have not yet moved deeper, so flat-line trolling, or using minimal lead has been the best way to get them. Kokanee dodgers trolled well back of the boat with hootchies or wedding rings tipped with corn has been the go-to method here, and that is what most anglers are trying.

Longview Area
Cowlitz and Kalama Rivers Fishing Report—Steelhead fishing is fair to good, according to Dave Mallahan of Dave’s Guide Service (360-201-9313), but he feels the run may be beginning to slide past the peak of the run. Still, Last week Tacoma Power employees recovered 566 winter-run steelhead adults and one spring Chinook adult over five days of operations at the Cowlitz Salmon Hatchery separator. In the latest creel survey above the I-5 Bridge, 39 bank rods kept 26 steelhead, the best the bank guys have done all year. Five boats/16 rods kept 11 steelhead. Most boat anglers are bobber-dogging with beads or small bits of bait. Bank anglers are fishing bait, jigs, or beads below a bobber, and doing some drifting.

The lower river is fishing well, too, and a few Chinook have been taken down here in addition to the steelhead. Most bank anglers are plunking, and boat anglers are deploying a number of methods.

The Kalama has fished a little slower recently, as the steelhead run seems to be moving past the peak of the run, and the Chinook are just beginning to show. A few Chinook have reportedly been taken by anglers trolling herring or other bait in the lowest pools of the river, just above the mouth. Bait fishing rules the Kalama when it comes to spring Chinook, although the fish will start taking other offerings as their numbers climb. Steelhead are still being found in most sections of the river, and bank anglers are getting a few in the canyon. The steelhead will take most offerings, including bobber and jigs, bait, or beads, plugs, and even spinners.

Columbia River Gorge
A little over 500 spring Chinook have crossed Bonneville, if you include jacks. That is not many, but once counts improve, so will the fishing at Drano Lake and the Wind River. A creel survey in Drano found no fish landed this past week, but they are on the way. Warmer water in the Columbia would hasten the springers along.

SW Washington Members have access to the Columbia River reports as well.  Find them here.