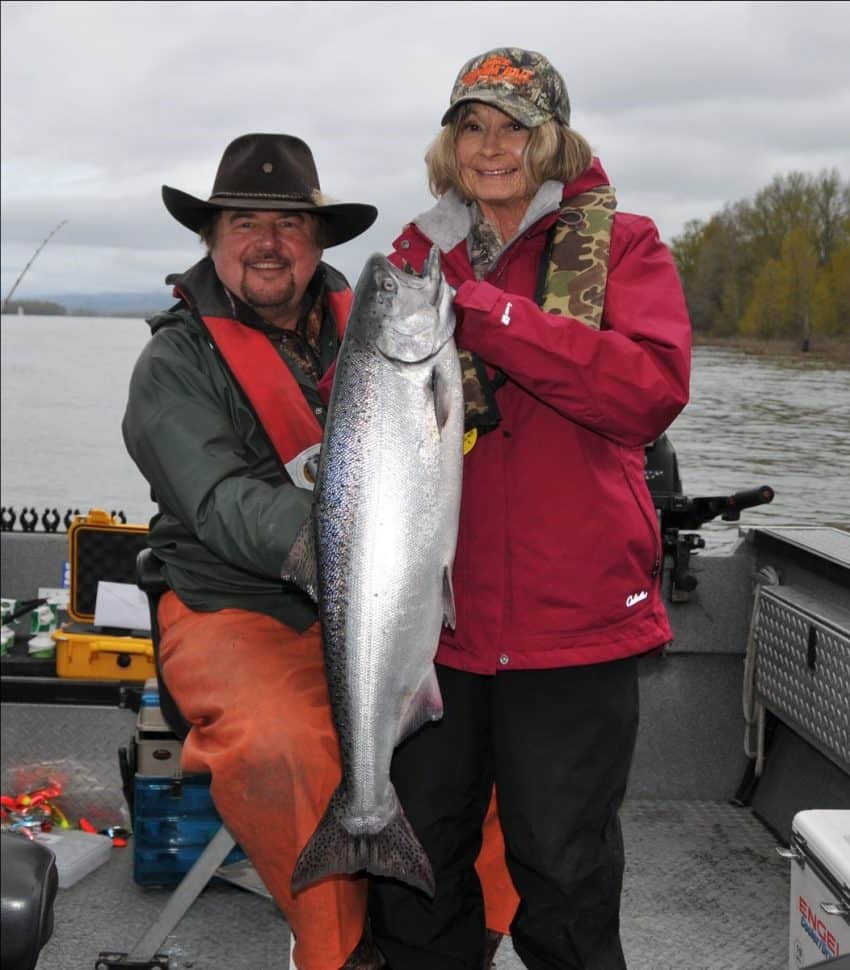 Portland/Metro Fishing Report – The Willamette River fishery has slowed from recent weeks but the lower Multnomah Channel and the Oregon City reach are still putting out fair numbers of fish. With the mainstem Columbia still open through Sunday, Willamette bound biters will continue to get intercepted until early next week. It won’t be long however, until the dogwoods are in bloom, and the best of the springer bite is too.

The mainstem Columbia near Portland has produced sporadic results from the airport reach to Frenchman’s Bar near the mouth of the Willamette River. The Columbia will remain open through Sunday, but the best action will remain in the lower reaches downstream of Longview. Some fish are being caught in the gorge too with bank angling on the Washington side quite productive last Monday.

Sandy and Clackamas River anglers are on hiatus right now. Both rivers have growing numbers of wild winter steelhead available, with just a few summer steelhead starting to show. With angler masses in pursuit of Columbia and Willamette spring Chinook, you’ll have a lot of the water to yourself if you enjoy catch and release fishing.

Trout fishing is a thing this month and ODF&W has its trout stocking schedule up and ready for study. Go HERE to see how many of Oregon’s favorite sportfish are available where.

North Coast Fishing Report – There aren’t many steelheaders still in pursuit of north coast fish, but those that are, are still finding fair success on the Wilson and Nestucca systems. Despite low, clear water conditions, early birds are still getting the worm but stealthy tactics are necessary. The run, as low as it was, will still provide sport through mid-month.

Although spring Chinook season is open on the north coast, we’re still weeks away from hopeful opportunity in the Tillamook system.

Meanwhile, the ocean is slated to lay down this weekend, providing hungry anglers will ample opportunity for large lingcod and seabass out of all coastal ports. Ocean Chinook season is open, but you stand a much better chance at an inland spring Chinook than one from the salt this time of year.

Ocean and Columbia River salmon seasons will be set this month and anglers are excited about the opportunities. We’ll report on that when the plans get set.

This week, Chinook subscribers will read a great piece from TGF contributor and NW icon Buzz Ramsey. Buzz talks about how tides effect spring Chinook action on the lower Columbia River. We posted this valuable information on Monday so trollers working the lower Columbia could take advantage of it this week. We put Buzz’s theories to the test, yielding one nice wild one we put back for the spawning beds. See the video HERE.

Central and Eastern Oregon Fishing Reports – Glenn Zinkus reports on trout and steelhead from the region:

Lower Deschutes River:  Fishing action on the Lower Deschutes in the open part of the river around and downstream of Maupin is good, and can be red hot if you are nymphing – especially tight line Euro nymphing.

Middle Deschutes River:  The Middle Deschutes is starting to drop!  Anglers should come prepared especially to fish March Browns – look for these through the afternoon, with maybe some Skwalas mixed in.

Spinners and spoons are working well, and the Middle Deschutes is still high enough that conventional tackle will be super effective.

Lake Billy Chinook is getting hot.  The Metolius Arm is open (tribal pass required) and bull trout fishing in that area is picking up.

Crooked River:   Reports from the Crooked river have all been good…..every shop I check with have good things to say.

Metolius River:  Overall, the Met has been fishing well, and plenty of other anglers during the day.  Fishing is improving with warmer temperatures and longer days.

All of the migratory Lake Billy Chinook bull trout are back in the reservoir, but resident bulls are still present.

Suttle Lake:  The ice is off, and there has been a boat on the lake on two different occasions, so early season fishing may be starting.

Chickahominy Reservoir:  Ice is off, and fish are in the reservoir.  Last year water levels were low, and water remains low this year.

Owyhee River:  River levels are steady and will remain so for the next one week – see the updates from The Anglers Shop below.   Fish this river carefully with these low flows by being stealthy, and watch for fish activity before any blind casting.

Wallowa River:  The Wallowa has been high, but dropping nicely.    As of the time of this writing, Northeast Oregon will be one of the cooler areas.  Steelheading has been good; one pair of anglers hooked 10 steelhead between them the other day.

Remember that trout fishing on the Wallowa is now open year-round, so trout opportunities exists.

Grande Ronde River:  Water levels have been rising day by day.  I recommend checking in with The Joseph Fly Shoppe at (541) 432-4343 before setting off for the Grande Ronde.

Imnaha River:  No on the ground reports this week.  ODFW reports that steelhead are moving through the system, but their own creel surveys show that catches are variable.

Chinook members should take a break from all the reports and learn how to tie a yarnie from Salmon Trout Steelheader author Dave Kilhefner. Yarnies are effective and economical steelhead getters every month of the year!

SW Oregon Fishing Report – Again, the Rogue river conditions are back to flows in the low 1500’s (cfs) at Grants Pass. However, the water temp has risen to the low 50’s which many believe is a more active bite temperature.
Mid-Rogue Fishing Report

Most all neighboring streams are closed for steelhead, but the Rogue will remain open all year and retention of wild steelhead closes April 30th.

The mid Rogue flow at Grants Pass is at 1510 cfs, 2 NTU and 52 degrees (as of 8am 4/1). Nice weather over the weekend and will again provide opportunity to steelhead die-hards to get out and practice low and clear water tactics for success.

Tackle tactics will be the same as what to put out there except when using roe, worms, or other bait, you’ll need to go a little longer and lighter leader using smaller gobs and pieces of bait.
Grants Pass guide Troy Whitaker of Troy’s Guide Service (541-761-0015) reported this week “Plenty of fish are still in the area but scattered”. He suggested to fish more upriver towards Gold Hill since the last pod of fish have moved up.

Springer fishing in the Columbia continues to pick up, and with just a few more days left, it’s time to get out after them. Remember, Sunday is your last day on the Columbia for springers, barring an unlikely extension. A few Chinook were taken up by Bonneville Dam by bank anglers this week, but passage over the dam remains slow. The bite was best this last week from Kalama downriver.

The paltry runs of winter steelhead are peaking or past the peak and fading right now. A lot of dark fish are being caught.

Trout fishing is still good, and the state has stocked some lakes well in time for spring. Excess steelhead are being planted, too. Warm water species, including smallmouth bass and walleye, are biting in the Columbia, and panfish are starting to bite in local lakes.

Lewis and Washougal Rivers Fishing Report—The North Fork Lewis is in between fish runs right now, with few anglers still out looking for steelhead, and most others still waiting for the first spring Chinook to show. There are no reports on angler success. Although 2,400 adult spring Chinook are expected to return to the river this year, in-river catches tend to be slow until mid-April at least.

The Washougal River winter steelhead run is beginning to wind up, and with the river fairly low and cold, anglers here will be waiting for the summer run to commence. Those fish will not show in strong numbers until May, and with the near collapse of the winter run, prospects are not great for a good Skamania summer steelhead run this year.

Merwin and Yale Lakes Fishing Report—Kokanee fishing has been good at times at both lakes, but inconsistent. Anglers have been trying to locate the schools by depth while developing a pattern to keep the fish biting, but the schools keep changing both depths and preferences, sometimes many times a day. For the most part the schools are still usually within the 20-foot depth.

Cowlitz and Kalama rivers Fishing Report—Steelheading on the Cowlitz may already be past the peak, according to Dave Mallahan of Dave’s Guide Service (360-201-9313). While he has still been catching fish, including a five-fish day recently, he feels anglers should be catching limits right now. Still, many anglers are striking out. Returns to the hatchery are way off from previous years. Last week, Tacoma Power employees recovered 237 winter-run steelhead adults during five days of operations at the Cowlitz Salmon Hatchery separator. Mallahan said that number should be up around a thousand, and the run is so far only about one third of the ten-year average, and about half of what came back last year.

Lower river anglers are picking up a few steelhead. 74 bank rods kept seven steelhead and released one steelhead below the I-5 Bridge last week. Plunking is working well for bank anglers.

The Kalama has slowed just a little bit this past week, and the river’s steelhead may be tapering off. Still, John Thompson of Sportsman’s Warehouse in Vancouver, (360) 604-8000), did hear reports of steelhead being caught in the canyon, while WDFW creel surveyors found three bank anglers with no catch. One boat/three rods kept one steelhead. Anglers have been taking fish with bobber and beads or jigs, plugs, and hardware.

Local Lakes Fishing Report—Riffe Lake is producing good catches of coho, trout, and some very nice pre-spawn smallmouth bass. Silver Lake is doing well for crappie and a few largemouth bass. Kress Lake is still fishing well for trout and excess steelhead, although the weeds are tough to work around

Correction: The Wind River is closed to salmon and steelhead angling until further notice. This report incorrectly stated that it was open.

Angling is open in Drano Lake for spring Chinook, but there is no report on angler success. However, fishing rarely picks up until mid-April in these fisheries. According to the Fish Passage center, there have been under 100 adult Chinook pass over the dam as of Wednesday.

The Klickitat is expecting a return of 1,500 adults, and Drano should see about 3,900. Anglers are reminded that fishing in Drano is slated to close after May 5.

Local Lakes Fishing Report—Anglers are reminded that Rowland and Spearfish Lakes in Klickitat county close to fishing after the 31st. Middle Ash Lake was stocked with 2,500 rainbows at 2.3 per pound recently and is fishing well. Anglers are also catching rainbows at Icehouse Lake.

If you are interested in MORE information, check out everything we offer here.