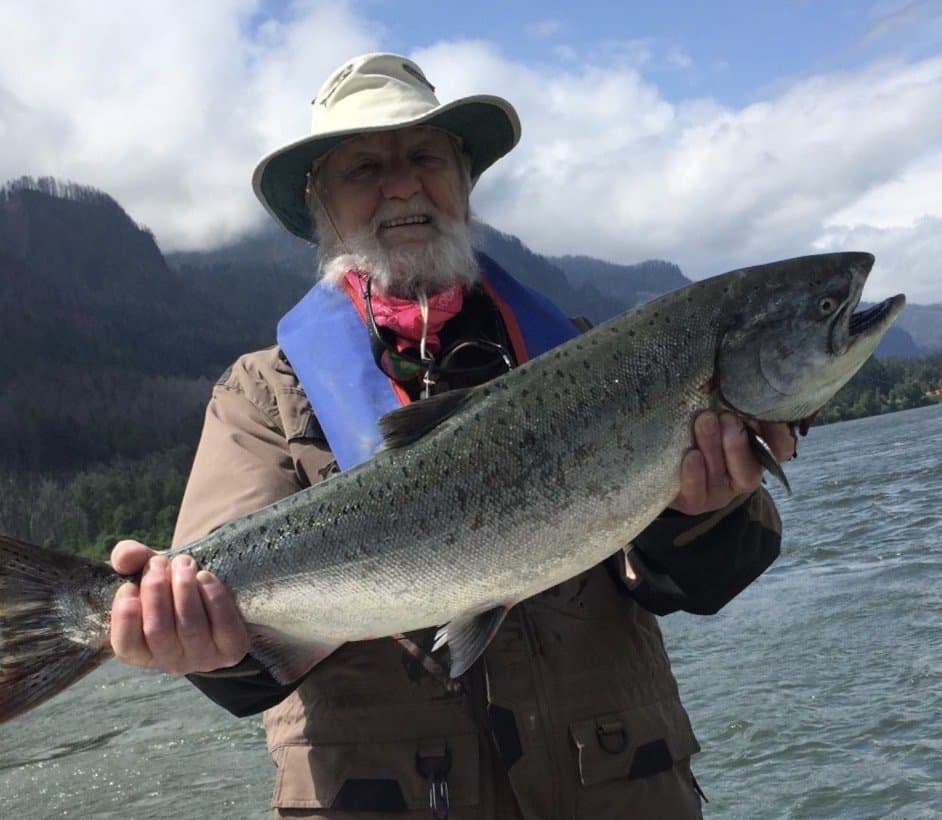 It’s peak season for summer Chinook and it looks like the run will come in as predicted. Catches this week should improve in most sections of the lower Columbia River.

Bonneville anglers have been dealing with fluctuating flows, but that’s nothing new. Be prepared to adapt based on water releases from the Army Corps of Engineers. Plugs and spinners should both be effective here.

Downstream, anglers fishing on anchor downstream of the Columbia River Gorge should see fair action for those using plugs from the boat, and Spin-n-Glos tipped with coon shrimp from lower Columbia River beaches.

Willamette River anglers are entering peak season for the harbor fishery. Decent numbers of “springers” are being caught almost daily. It remains a flasher and spinner show, but some are still falling to herring during the early morning bite.

Shad fishing remains excellent in Oregon City and should hold up for another few weeks.

The Sandy booted out some spring Chinook last week, but summer steelhead are hard to find here. The water is likely to turn silty over the weekend, with the excessive heat wave bearing down on the region.

The Clackamas remains one of the better metro opportunities for summer steelhead, certainly a surprise. Fish will get stressed this weekend, when the splash and giggle hatch ensues with the warm weather ahead.

Ocean coho reports aren’t glowing, but they’re not dismal either. Saltwater anglers are out after them and given the volatility of ocean weather lately, they’re trying for about everything they can. Nearshore halibut is on the menu too.

Central Coast reports have been fair for coho, few are limiting. It’s even slower out of Garibaldi. No one is real worried yet, it’s too early for that, but with water temperatures improving, anglers will be coming in with high expectations in the coming weeks. Chinook catches are rare.

There are some nearshore halibut falling out of Newport, Pacific City and Garibaldi/Nehalem in recent days.

Spring Chinook fishing is tapering, as if it ever got real good. There remains some effort in tidewater, but fish that were stacked in there a few weeks ago have migrated upstream. It’ll be sporadic fishing for the remainder of the month.

District rivers, as you might imagine, are low, clear and rather challenging to catch salmon or steelhead in right now.

Trolling or casting for sea-run cutthroat trout remains an under-utilized and under-appreciated fishery in most north coast estuaries this time of year.

Bottomfishing has gotten more challenging, but it varies by day, with lingcod action picking up slightly from previous weeks.

Ocean crabs are turning soft and that won’t get any better.

Very light winds will be prevalent through much of the region, although these will be moderate later in the weekend in the Columbia Gorge.

Lower Deschutes River: I fished the Lower Deschutes through much of last week. PMDs, PEDs in the evening, and especially caddis are going strong. Stronger than I have seen in some recent years.

Although the salmon fly crowds ended some weeks ago, the Lower Deschutes has been a popular place on the river and in the campgrounds.

I watched another angler doing well with silver spinners one evening, before the trout went on the “bite” and were rising for caddis.

Lake Billy Chinook: Reports of good kokanee fishing in both the Deschutes and Metolius arms. Jigging with gold and silver colors.

Crooked River: Crooked River is best fished now in the mornings and the evenings. There are evening caddis hatches.

When the afternoon hatches are not coming off, use Sparkle Pupas, Puparazzi and Micro Mayflies, Zebra midges,Split Case nymphs and soft hackles.

Metolius River: The always cool Metolius will be one of the better fishing options this weekend and next week. The air temperatures will be hot, but the water temperatures are more constant and in a safe and healthy range for trout.

Expect PMDs (I saw a lot of PMDs last week) and caddis. Caddis will be an evening staple with these warm summer temperatures.

Crescent Lake: Crescent lake will remain very low. The lake is accessible from the boat ramp at the resort, for a $10 fee paid to the resort. We are entering the prime time to catch Mackinaws.

Latest report from Tim’s Fishin Tackle Shop are that kokanee fishing is fair to good, and lake trout fishing is good.

Ana Reservoir: There are reports of good fishing on Ana Reservoir for legal and trophy size trout. Trolling lures and flies, and bait are taking fish.

Lofton Reservoir: I’ve fished Lofton in the past, and heard stories dating back 40 and 50 years of some of the trout taken from Lofton. Lofton is fishing well for stocked legal and trophy trout.

Sprague River: Upper Forks of the Sprague, such as the North Fork have good USFS access. There was still some black drake activity in the upper portions of the river, although any attractor dry fly will be effective in the upper stretches.

Williamson River: It is Hexagenia time on the Williamson, a bit early, but not unexpected. The mainstem right now, and upper river should be fishing well for late evening Hexagenia hatches next week with the incoming warm weather.

Both the upper and lower Williamson Rivers are fishing well for redband rainbows.

Grants Pass Pro-guide Troy Whitaker of Troy’s Guide Service (541-761-0015) – Troy has been fishing the Rogue Bay in Gold Beach lately as the weather has been hot in the valley. Rogue River flows have reduced dramatically the last 2 days and the water temp is 70+ degrees making the current Summer/ Fall Chinook that are starting to come into the bay will hold. Boat trolling pressure has picked up a bit , but is still fairly light. Troy got 2 nice Chinook trolling Rogue spinner bait with anchovy brined over night in Pautzke clear/ blue bait brine

Josh reports that the salmon fly hatch is winding down from Shady Cove on up to Lost Creek. Some summer are showing up but expect the bite to slow for a week or so to acclimate to newer low water conditions. July should be pretty good Josh expects.

Marine Forecast – Hot valley temperatures will most likely produce coastal fog and stir up some winds, but the weekend forecast look pretty good to get out in the cooler coast and try some salmon fishing. Coho and Chinook (2 salmon/day limit) prospects are good out of Brookings, Gold Beach, Port Orford, Coos Bay, Charleston, Winchester and Umpqua ports.

Minus tides are also forecasted for the weekend and could lead to some nice clamming as well. Reports of Coho limits earlier this week when boats could get out indicates a decent salmon season.

Anglers may also choose to fish the offshore longleader fishery outside of the 40-fathom regulatory line, which is open year-round. The longleader fishery has a daily bag limit of 10 fish made of yellowtail, widow, canary, blue, deacon, redstripe, greenstripe, silvergray, chillipepper, and bocaccio rockfish.

Check out Jeff’s detailed report and forecast in this week’s paid version for Chinook and Steelhead Members both!