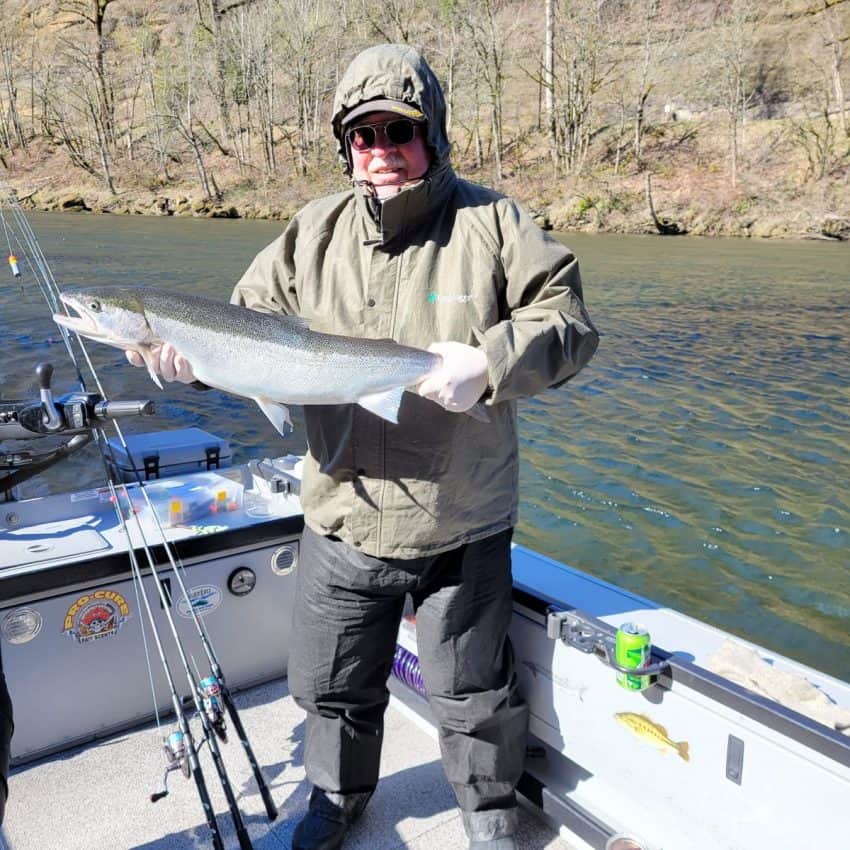 Portland/Metro Fishing Report – More spring Chinook salmon are being reported from Oregon City to the Multnomah Channel. Cold temperatures haven’t slowed effort, although propane heaters have become all the rage this week. Although far from consistent, catches are justifying a fair effort by motivated anglers, and catches should continue through the weekend, before precipitation hits the region, causing a short hic-cup on success rates.

Interest in sturgeon fishing has yet to take off on the Willamette just yet, although action is fair to good for the few that are trying.

The Columbia remains quite cold to inspire spring Chinook to move, let alone sacrifice themselves to angler gear. It’s best to invest your time in the Willamette, where water temperatures are running about 6 degrees warmer.

Smelt are being reported in the mainstem Columbia, a good sign for dippers and spring Chinook anglers too.

Pro Guide Jack Glass reported a quality summer steelhead a client of his took this week. The flesh color is amazing, I’m sure the fight was too. See picture below. The Sandy has more winter steelhead than summers one might guess, and warmer temperatures and a weather change will do wonders for this fishery.

The Clackamas has been yielding steelhead in the lower reaches. Fish have been slow to migrate, but with the upcoming weather change, action should dramatically improve.

North Coast Fishing Report – Low, clear water continues to hamper steelhead success for north coast anglers. A weather change, however, will improve conditions, which may happen early next week. The Wilson is extremely low, and producing only in a few holes. The Nestucca is in better shape, but few fish are moving, making for challenging conditions.

Other north coast streams are too low to produce, even though many of them have the notoriously “snappy” spawned-out steelhead headed their way back to sea. Conditions are simply too low and clear to produce any measurable results.

The mainstem Nehalem is in good shape and producing fair results for this time of year.

The Siletz remains quiet, the Alsea even more so. Rain is desperately needed and should bring better success next week.

Saltwater anglers have been flush with sea bass, lingcod have been a bit harder to come by. Ocean crabbing for sport-legals hasn’t been great. It won’t be all that long before the spring “clutch” comes on, only slowing sport success even further.

Free Fishing weekend did produce limits and double hook ups of bottom fish from Brooking up through Winchester bay. It was, and still is the “best bet” for this coming weekend- Friday/ Saturday for good to great fishing action. Surf perch action along the rocky jetty’s and sandy beaches has also been good.

A little bit of rain touched the coast but not enough to raise and warm river levels into good fishing shape. It “finally” looks like my multiple car washing efforts are about to pay off (since it will typically rain within 48 hours of doing so) with a nice big storm with significant rain expected early next week. With that in the forecast, rivers and streams will probably blow out temporarily but should bring in a good influx of winter steelhead and finally provide some good fishing.

The lower Rogue river has remained slow for steelhead, but some action has been reported of some winter fish being caught below Rainie Falls. Those willing to take the 3 mile hike might be rewarded with some nice fish that have stacked up there waiting for higher flow. From Grave creek up to Hog creek anglers in boats have got a few fish on metallic maglips.

The Chetco is still low and clear but should be in great shape for the first of March weekend…get ready!

Low water slows steelhead bite, while a very few spring Chinook are showing in places. Trout fishing has been fair to slow in local lakes, while walleye are biting well in the Gorge.

Late run steelhead are biting well in places, while other streams are fishing slow. The action should peak over the next month. A few springers have been caught but the best action is still some weeks away.

Trout fishing has been inconsistent at most local lakes, although strong stockings continue. The fish have been snubbing the favorite offering, Powerbait, and preferring worms and other natural baits. Watch for fresh trout plantings, as well as big broodstock trout and steelhead plantings HERE

Walleye continue to bite well in the John Day Pool, but a little slower in the Bonneville and The Dalles Pools.

If there is going to be a sport smelt dip in the Cowlitz this year, it should be happening right now. However, there are no smelt fisheries planned for anytime soon. You can check the WDFW website for fresh info on smelt dips HERE.

Lewis and Washougal Rivers Fishing Report—Steelheading has slowed in the Lewis River, with most reports indicating that the runs are done. Very few steelhead, wild or otherwise, are coming to hand anywhere in the river. Bank and boat anglers are finding few, if any fish, and most anglers have given up on the river. This system may be done until the spring Chinook begin to enter.

The river is in good condition, and has been running a little over the 10-foot stage recently. If there were steelhead around in these good conditions, anglers would be finding them.

Likewise, the Washougal River steelhead run has petered out, and most anglers have now given up on the little stream. Unlike the Lewis, this system is very cold and clear, with poor in-river conditions. Even if rains do lift the river soon, there are very few steelhead around for anglers to target. This one may be done for the year.

Merwin and Yale Lakes Fishing Report—Both lakes are rated fair to good right now, and although the weather is cold, most anglers are still doing well, according to John Thompson at Sportsman’s Warehouse in Vancouver, (360) 604-8000. Recent patterns continue to prevail, with the schools of kokanee holding in the top 20 feet of the water column. Flat-line trolling, or using very light lead has been the best way to go.

The fish are biting on most usual kokanee rigs, tipped with natural corn, and trolled behind kokanee dodgers. Remember there are bull trout in Yale Lake, and they may not be kept.

Cowlitz and Kalama Rivers Fishing Report—Dave Mallahan of Dave’s Guide Service (360-201-9313), reports that the fishing had been pretty good in the Cowlitz, but it slowed considerably this past week. However, the week before James Castle was fishing with Mallahan when he landed a 24-pound hatchery steelhead. Recent creel surveys in the river above the I-5 Bridge back up Mallahan’s report, as surveyors for the state found 13 bank rods releasing one steelhead, while four boats/14 rods kept only one steelhead.

The lower river was producing some steelhead for anglers that were plunking with spin-n-glos the week before this, but it has slowed like the upper river. Creels backed up other reports, as 18 bank anglers released one steelhead during the latest survey.

The Kalama River is fishing fairly good, even though the water is a bit low. Anglers are getting fish on a variety of different offerings in pretty much all sections of the river. They have been a mix of late returning wild and hatchery steelhead. Bobber and beads or jigs have been the preferred offering, but anglers are also getting them by pulling plugs, drifting, or even hardware. Bank anglers in the upper river are doing well, and boaters are most often working the middle floats of the river. The weekends have been pretty busy. There are low flows right now, so drift boaters need to use caution.