As Oregon’s sportfleet winds down a historic season here, it’s worthwhile to make one last good push for a healthy harvest of a resource most Americans don’t have access to. It’s also important to realize just how lucky we are, as Oregonians, to have the bountiful opportunities we enjoy and our role in protecting these resources for our children.

I’ve mostly been writing about somewhat somber subjects; The Store is Closing, and Ocean Resilience did not bring welcome news about the condition of our ocean but with the commercial crab fleet still side-lined until algal blooms subside, keeper crab should be seething into coastal estuaries (that remain open for sport crabbing) for the next several weeks. This is the time of year when egg-laden females can often be found buried near the surf on ocean beaches, getting ready to release their eggs into the water column. The lifecycle of the Dungeness is very fascinating. Take a minute to read all about it.

Nothing says holidays like fresh Dungeness crab. Market price for crab cracked out of the shell can often reach over $40/pound and many would say it’s worth every cent you pay for it. Dungeness is what most fishery managers would call Oregon’s most sustainable fishery resources although last year was a bit of a bust for the commercial fleet compared to previous years. In an average year, nearly 14 million pounds of fresh Dungeness hit the docks in Oregon. Considering a big crab weighs upwards of 2 pounds, that’s a lot of shellfish and the fishery is deemed Oregon’s most valuable. Ironically, the fishery has been managed  similarly for the last 100 years and remains a very strong fishery indeed.

Almost anyone can participate in this fishery, from shore or from a boat. Shore casters can pitch out crab snares along the lower Columbia River off of Fort Stevens State Park or if the surf is safe (maybe a bit rare on these coastal winter days), from one of the many jetties that line our estuary entrances. Of course a boat offers excellent opportunities in almost any estuary and especially the lower Columbia River, out of Hammond. With most adults filling out their shells quite nicely this time of year, it’s a pretty good opportunity for those willing to invest a little bit of time. Here’s a great video showing just how much fun it can be.

Before we take a look at our last ditch Chinook effort, it’s just important to point out that even though 100 years of congruent regulations seems to still be working for the Dungeness population, don’t overlook the threats that exist to this unique population of crustaceans for the future. They are real and they are already taking place. With the potential siting of an oil terminal in Vancouver, Washington and the potential siting of a coal terminal in Longview Washington in the near future, I recently got to pose the question to EPA administrator Gina McCarthy of how we reverse, not curb, the detrimental effects of ocean acidification already happening in our Pacific Ocean? It may have not been a fair question and one more appropriately directed towards NOAA but she graciously asked for me to follow up with her. How cool is that? Her staff was courteous enough to provide a direct call to me and laid out some great work the agency is doing to understand our role in ocean acidification. It’s been a fascinating conversation.

Most would agree, it’s been one of the most productive fall Chinook seasons in memory, certainly in my 19-year history as a professional fishing guide. What a run we’ve experienced this year and they are still coming. The season will close on January 1st and rightfully so; it’s time to give these fish some much deserved space to spawn the next generation of wild fish.

Eggs for earlier returning adult Chinook are likely about to hatch themselves. Spring Chinook, what few wild ones remain on the Oregon coast, are likely emerging from the gravel about now and will try and make their way into the world when water flows are at their highest. It’s bewildering to me how a Chinook fry can swim in the swift winter currents our rivers offer and still be one of the most successful species to return to our rivers; more justification for complex habitat in our timber ridden watersheds.

Anglers may have another week or two of fresh Chinook to harvest on the northern and southern Oregon coasts but be cautious of the fish you choose to harvest. Females, no matter how bright and how many sea-lice grace their tails, may still cut pale-fleshed and should be considered for release. Of course they’ll be laden with eggs but if you’re skilled enough to catch one of these winter beauties, do you really need the extra eggs? They may be better off spawning our next generation. 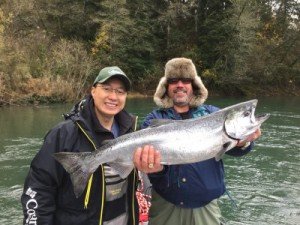