Parked in a parking lot at the mouth of the Chetco River on the southern Oregon coast, the ocean was alive with migrating grey whales. They were spyhopping, finning, breaching and spouting for as long as we wanted to watch. They were just a couple of hundred yards offshore.

March is always an amazing month off the Oregon coast. Migratory gray whales are headed back to summer feeding grounds in the north Pacific, after a winter of calving along the Baja Peninsula. Newly birthed calves are on their first migratory run, fully displaying the meaning of ecosystem relationships all along their 12,000-mile journey.

On their journey, they must avoid predators if you can believe that; these are whales after all. Further discussion with my colleagues only befuddled me further. I knew that baby gray’s had to rely on their mothers for protection from orcas. Many pods of orcas prey on marine mammals, while others are primarily fish eaters (such as those in Puget Sound). The species has a fascinating life-history, and as much time as I’ve spent on the ocean and our waterways, I have never seen one in the wild. Kinda like cougars and sasquatch for me, do they really exist?

These whales are immense however, my first thought is what does it take to keep one of these things fed for a day? The tonnage of forage needed on a 12,000-mile migration must be staggering. How is this ocean supporting such a robust population?

We certainly take it for granted. These whales show themselves on a regular basis, but who wouldn’t want to spend an afternoon away from home simply watching these incredible mammals do their thing right before your very eyes? How do we ensure they get to keep doing this incredible pilgrimage that in of itself, is a virtual gold mine to whale watching tours all up and down the Pacific coast?

The sad fact is, just like the hundreds of thousands of other visitors that come to the Oregon coast, we didn’t come here specifically just to see the whales. My friend Michael O’ Leary and I were on a mission to see who’s up for a conversation on the Magnuson Stevens Act. And just like breaching whales in the surf, most of us overlook the fact that this federal law is responsible for rebuilding nearly 2/3 of the stocks of groundfish that were placed in the “overfished” category just 20 years ago. Some of these species have rebuilding timelines that are still 50 years out!

Well, those conversations went swimmingly. We met with many of the change agents of the south coast of Oregon. Already subscribed to conservation for ocean fisheries, not just because it’s the right thing to do, but because their jobs depend on it. And yes, we all take it for granted.

One of the reasons the reauthorization of Magnuson Stevens is non-controversial is that it has a proven record of accomplishment rebuilding depleted stocks, safe-guarding forage fish, embracing eco-system based management versus single-species management and it flat out gets a working waterfront back in working order. I was around for the massive buy-back program for the groundfish fleet and the dramatic draw-down of harvests for groundfish off the west coast, it was devastating. Remnants of the boom (and overfished) fishery still remain in place today. Processing plants remain vacant, vessels continue to rust away and unemployment in the seafood sector is a fraction of what it was 25 years ago. Nobody wants to see that continue, and we want to get back to vibrant waterfronts that include sustainable seafood harvest and a tourism component that educates the public on the future challenges and current successes of our ocean resources.

The message we came away with? “Don’t you go changin.’”

These are the people that salmon and steelhead fish, that target the giant lingcod and have the rare opportunity to harvest Pacific Halibut when the scenario lines up when abundant numbers that happen to migrate that far south. These are the people that are learning how fish behave, and what stocks of fish exist in what part of the ocean and what time of the year. They’ve been sidelined by fishery closures before, they’ll be sidelined by closed fisheries again, likely as early as this year, when large swaths of southern Oregon and most of California will be closed to offshore salmon harvest due to low abundance of Sacramento and Klamath River stocks of Chinook from the drought years. That makes species such as rockfish and lingcod all the more important for sustaining these already fragile ports during these untraditionally lean summer months.

Just as with any piece of legislation as important as the Magnuson Stevens Act, it will be vital to get the lay of the land from those who make their living from our incredible natural resource base. We are the terrestrial gray whales of the earth’s ecosystem, with one exception; we actually have the technology, capability and economic motive to remove all of the ocean’s resources, gray whales would starve to death before that could happen. 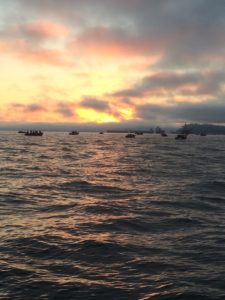