It isn’t all that often that a viable opportunity for Oregon coast halibut comes around, so when it does, I want to be there. Halibut of course, is a bit of an iconic species, fetching top dollar in highfalutin restaurants throughout the world. Not that I’m highfalutin or nuthin,’ I had to look the word up on Google…

Of course we fall victim to the sea. We’d been watching the ocean forecast well in advance of our hopeful May 11th date with destiny; it just wasn’t to be. Southwest winds to 20 knots and wind waves to 4 foot every 5 seconds, that would be a rough 3 hour ride, I’m out.

Our alternative wasn’t a bad option however, spring Chinook just blocks away from my home in Oregon City versus a 2 hour drive at 3:30 a.m. to Newport? Pretty simple math, really. We boated 2 small spring Chinook for 3 anglers, mine came off near the boat so it’s pesto pasta for me tonight.

There’s something pretty special about those flatties (halibut) however. It’s kinda a grungy fishery. You fish sloppy, stinky baits, you fish on the bottom, where the biters seem to be, and when you catch a halibut, they have a very distinct smell to them, kinda like the sandy, muddy bottom where they spend so much of their time. They don’t really fight all that hard, but when you’re reeling one up from 400 or 600 foot of water, knowing that you have a $120.00 fish on the other side, you are highly motivated to get your prize to the top, halibut don’t fall all that easy off of the Oregon coast.

You have to work for these fish in more ways than one. I’ve often called it halibut working, instead of halibut fishing in fact. You have to use heavy lead to get down to the 400-foot mark, you have to travel 20+ miles in not-so-friendly seas more times than not, and you only get to take home 1 fish per person for every trip you make out there. It remains wildly popular however. There are some fine eating, white fleshed fish off of the Oregon coast, but these are halibut! The bone free fillets are worth the price of admission.

Those more knowledgeable than I would say the Oregon halibut fishery is more of a fluke than anything. Of course these fish obviously have a home range that extends into Oregon and some years, they even have some pretty fantastic fishing in the very southern range of Oregon, south of Cape Blanco. It’s a pretty special thing to NOT have to travel far distances for halibut, Oregon’s nearshore halibut fishery can offer up some great opportunity as well. I’ve even caught some dandy halibut fall salmon fishing near the green can just a short distance from the entrance of Tillamook Bay. I’ve never been so happy to guide a group of anglers that had such limited freezer space in their RV; that halibut ate especially good!

I can’t say I know all that much about our Oregon halibut, but it’s just another feather in the cap of why Oregon is the greatest state in the Union (but remember, it rains 360 days out of the year so don’t move here). The Oregon Department of Fish and Wildlife has more information about halibut here.

There remains both sport and commercial halibut opportunities off of the Oregon coast. This provides opportunity for both sectors of fishermen, and both fill an important niche in rural Oregon economies. Like nearly all species of highly sought after fish, a sport-caught halibut is worth more than a commercially harvested one, restauranteurs get as excited to serve fresh halibut, as we do going offshore in pursuit of them. Not only do I use the phrase “halibut working,” but “white gold” is how we often viewed these fish stockpiled in our freezers. Halibut photos garner some pretty big “whoa’s” amongst our fishing friends. 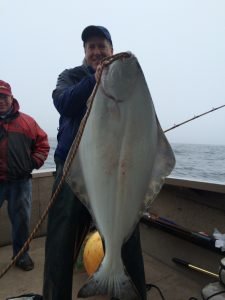 Bob Rees with a 40-pound halibut out of Newport, Oregon

Like all species managed in the Exclusive Economic Zone (EEZ), halibut likely present their own set of challenges, especially since everyone wants a piece of them. Their high value, and how states determine the value to the different sectors that harvest them, make management a high-tension issue in the west. Some states manage for equity, while others prioritize one sector over another. I honestly haven’t researched how that scheme plays out state by state, but I’m glad I’m not a guide or charter operation making a living off of halibut in Alaska.

Since the Magnuson Stevens Act plays a role in all things EEZ, the future of a robust halibut fishery depends on a robust reauthorization. It seems as if managers have successfully implemented measures that are keeping both the sport and commercial fisheries going and we’ll need that for the future. The halibut fishery remains one of the most consistent and persistent Pacific Coast fisheries that we manage, and we can’t get there without proper conservation measures.

Those that know the fishery so well are those that are the ones paying the most attention to how this species is being managed. If I have to keep practicing my passive method of harvest due to rough seas for much longer however, it’ll continue to be a disappointing year for those of us that enjoy the bounty of the sea that we’ve come to expect living here in Oregon. Bring on the white gold!