Human Stray Rates are Wildly Out of Control

Yet another lawsuit to shut down hatchery production in the Willamette Basin has been slapped down on the state of Oregon and the US Army Corps of Engineers by Willamette Riverkeeper and the Conservation Angler. The reason? Stray rates (and competition) of hatchery summer steelhead and wild winter steelhead. This blog piece is not really about a lawsuit that in my humble opinion won’t actually do anything to recover wild steelhead, but will likely cause more anglers to leave the sport and subsequently the funding base for the Oregon Department of Fish and Wildlife. They’re fighting for every penny of their agency budget in Salem as we speak. This blog piece is more about some bad choices going on at the Federal level, however.

This topic actually came to mind reading this story, headlined “Salmon Are Losing Their Ability to Sense, Fear Nearby Predators. It’s talking about how ocean chemistry is changing so much that salmon, and many marine finfish species in general, don’t have the same ability to escape predation that they once did, due to pH levels that mask certain smells that alert them to danger. Just another cut to add to the 999 that already effect our sensitive salmon populations. 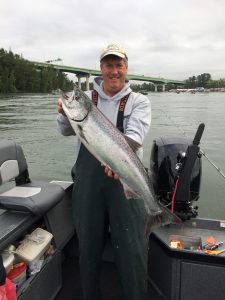 Bob Rees with a Willamette River spring Chinook from May 2017

Most of us that spend as much time as I do watching (and waiting) for our fish and wildlife species to fall back into the predictable patterns that have enabled us to successfully harvest them have noticed that something is not quite right. And, the longer we keep our heads in the sand, the deeper the hole we dig. Stripping funding for critical programs that strive to understand our role in a changing environment is setting a dangerous precedent. As the above referenced article states, the President’s budget plans to slash funding to the Sea Grant program, which not only studies ocean and climate change, but also workplace safety and even disaster prevention measures such as what to do when a tsunami hits. Yes, that’s “when a tsunami hits,” not “if.”

If you’re like me, you’re checking the Bonneville Dam and Willamette Falls fish counts as often as the NBA playoff score or the stock market. Those that spend a lot of time understanding what benchmarks we have to achieve in order to get (or maintain) our sportfishing opportunity wake up pretty optimistic as we hit that bookmarked page.

After a disastrous drought in 2015 killed countless Willamette and Clackamas spring Chinook, and most of the Columbia River sockeye run, this year, we’re faced with high flows, prolonged cold water and slow passage, which has stifled fishing opportunities across the board. Adult returns have been wildly off-base (but realistically, that’s a really hard job), and we’ve come dangerously close to violating the parameters we need to adhere to, to stay within the constraints of the Endangered Species Act. It’s not very fun to be a fisheries manager during these unpredictable times, let alone a fishing guide.

So far, the Magnuson Stevens Act has largely fallen under the radar of Congress and this President. It may be good to keep it that way, but not a great way to do business in these changing times. Magnuson Stevens has a great history of making sound and concise leaps forward during each reauthorization (typically every decade), to where it is today. Despite the warm water blob and El Nino, we still have a fair return of spring Chinook coming back, halibut and rockfish still seem stable and although the fall run of salmon isn’t the best we’ve seen in recent years, there will still be good opportunity in our region. The same can’t be said for California Chinook or our region’s summer steelhead returns however.

We’re about to enter the fun part of the year, where seas start to calm and fish become more accessible. It’s a great time to take note of what’s going on around you. Not only is it fun to learn about ocean upwelling as those pesky Northwest winds blow right at tide change, but you can learn some valuable lessons on which direction to turn depending on the wind predictions (it would behoove you to get the “Fishweather” app for your smart phone, by the way). After being so cooped up for the winter and springtime, everybody is pretty anxious to get back out on the water, and in the woods, to see how the year ahead looks.

It seems now more than ever, that our Federal government is harder to predict than this year’s salmon return. For that reason, it’ll be more important than ever before to let our lawmakers know that we have a viable, working waterfront. Let’s keep the human stray rates from further impacting our valuable populations of Pacific Northwest fish!