It Pays to Angle for Bigger Fish

The passage of HR 200 out of the House Natural Resources committee last week was somewhat deflating. Although there wasn’t drastic changes to the long heralded, hugely successful, bi-partisan supported Magnuson Stevens Act, there were some serious underpinnings that should create a “disturbance in the force,” for anglers that have enjoyed the fruits of our efforts for the last 20 years.

Now, it’s hard to argue that all is good on the western front when the ODF&W commission earlier this month decided it was necessary to reduce the daily bag limit from seven rockfish species to five. The decision was important because since the severe decline of salmon opportunity in our ocean fisheries over the last 3 decades, coastal communities, charters and guides have come to rely on bottomfish as a reliable source of revenue. Last year, ocean salmon fishing AND albacore fishing was challenging, causing additional pressure on bottomfish stocks just so anglers had something to go home with. Just think of the consequences of that situation if our fleets didn’t sit idle during the crisis two decades ago, in order to rebuild these once-depleted stocks of fish.

They are again abundant, and enjoyed by countless numbers of anglers, but facing another tough ocean salmon season, and a wildcard of an albacore season, anglers are already chomping at the bit for the January 1st opener to get back after ‘em. Despite the fact it’s currently closed, ocean enthusiasts such as myself, still check the offshore forecast and the bar observations just to see if it’s possible to recreate on the ocean during this time of year. It’s an anglers dream, low effort, high yield (the commercial fleet remains closed out of the crabbing opportunity due to low meat content). The feeling of having the bottomfishing grounds all to yourself on a calm winter ocean is enough to drive the most cabin-feverish-of-fishermen to serenity, pure bliss. The trip back to port with a fish box full of taco meat, and the anticipation of pulling crab pots laden with fresh ocean-caught Dungeness crab makes Santa’s visit seem meaningless. Don’t share that with your children…

To the ODF&W’ commission and staff’s credit, they did approve of a generous 10-fish limit on certain targeted species of rockfish in the ocean. It’s a developing fishery, but I’ve felt how heavy a bag full of fillets from 10 sea bass can be, talk about a bounty! For more information about this pretty cool opportunity, check out the regulations and species you can target by going here.

Now onto the subject at hand, we have bigger fish to fry.

So this crappy house bill passes through committee and may likely get a house floor vote in early January, nuf said. Special interests, embarrassingly, some sportfishing groups in the gulf states, are advocating for measures that would compromise the rebuilding successes of the red snapper stocks by allowing states to bypass scientifically credible catch limits that keep the population from being over-fished in the first place. Far be it from me to not appreciate a more fair allocation of fish to the sportfishing fleet, but to do it at the cost of future fishing opportunity? That’s poor policy. Furthermore, the fishery is so contentious, managers have split the quota between the recreational fleet, and the charter fleet, only further fracturing factions of anglers that should be working together to solve these issues collectively. That serves no one. 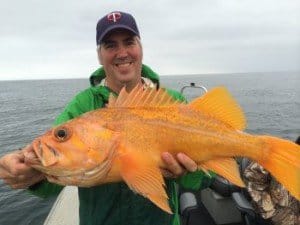 Angler Dan Hogan with a rockfish caught out of Garibaldi

Can you imagine, in our long-fought battle in prioritizing sportfishing economics on the mainstem Columbia River, that us anglers would endorse a measure that overfishes a rebuilding run of Snake River wild spring Chinook? Could you really feel good about harvesting even a single spring Chinook that you knew would compromise the rebuilding of this unique strain of fish that your children or grandchildren may never have a chance to fish for? It would be like poaching more salmon or crab than you’re allowed to, the stress of getting caught far outweighs the enjoyment of the illegal bounty.

So, will brighter minds prevail? Thankfully, the Senate is often seen as a chamber where cooler minds prevail. Senators represent a larger constituency in each state, and therefore have to vet legislation to a great degree, and how that will impact the larger population of their state. One of those key Senators, Senator Dan Sullivan has stated that the fight for a sensible solution is not over. Being from Alaska gives him a lot of street cred, and in the Senate, even more so.

Hopefully, Senator Sullivan will work with other west coast Senators and embrace the sensible bi-partisan principles that crafted the bill in the first place. Ted Stevens (of the Stevens portion of Magnuson Stevens) was a staunch Republican from Alaska, while Warren Magnuson was a Democrat from Washington. Both Senators saw the sensible solution in bringing about the tools necessary for recovering west coast groundfish stocks and brought along with them, their respective parties. Let’s hope for a win-win in 2018 that keeps our waterfronts working and our fish populations abundant, we all deserve a promising future in our great animal kingdom.