Often overlooked baitfish, specifically anchovies in this case, were the topic of discussion at a recent meeting in Astoria that I participated in.

A couple of commercial seine boats made a big splash in the lower Columbia River last summer. There’s no hiding it; with a spotter plane above and big seine boats operating in the estuary, an incredible harvest was taking place, but really, it’s all a matter of perspective.

Commercial seiners on the lower Columbia took about 5,200 metric tons of a 9,750 metric ton allocation for all of Oregon and Washington. That’s less than 10% of the assumed population.

One couldn’t help notice some of the anomalies that were occurring in the lower Columbia River however. One such phenomenon was the presence of humpback whales. Those too, are hard to hide. What an incredible sight they provided when the fishing was slow, and it was slow a lot. It begs the question however, why would humpback whales, typically a solitary creature, be present in fairly high abundance on the lower Columbia? Most would speculate that they didn’t have the food resources to keep them offshore, in their more normal habitat. As is the case with all fisheries management, there remains many questions. 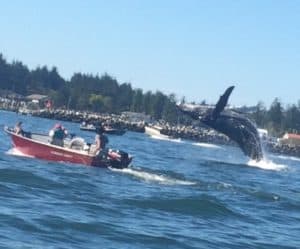 A Hammond humpback whale, August 2016 (maybe not so ironic is the Hammond jetty in the background, where Free Willy made his escape from captivity)

Now, ODF&W is likely one of the most scrutinized agencies in the state of Oregon. I really don’t know how they pull off all of the public meetings that they do. Their outreach is quite impressive and most Oregonians really respect the workforce at ODF&W and embrace the body of work that they do (I wish I could say the same for the Oregon Fish and Wildlife Commission). To their credit, they seek public input on just about everything, especially when it comes to season setting. In this case, it was no different.

Sportanglers, commercial seiners, the conservation community and even the spotter pilot all came together to have a frank discussion on how this fishery was shaping up. Will it expand? How will it be regulated in the future? How can we reduce conflicts? How can we up the annual catch limits to make the fishery commercially viable? It was a good 2 hour discussion and like most meetings of this nature, has no forgone conclusion. But also like most meetings of this nature, the stakeholders care about the resource. Of course there is fringe voices on both sides; “increase harvest opportunity” from the commercial side, and “Shut it down” from the environmental side. One commercial voice stated that the sportfleet wanted to shut down all commercial fishing activities on the Columbia River, and to be fair one sportangler cried that the 3 boat fleet has changed the entire dynamic of the Buoy 10 fishery, which isn’t true either. It is another clear case of communities not communicating, making assumptions and trying to solve a problem that is better suited for collaboration. For a situation like this one, it should be resolvable, since it does not have a long history of contention, like some other long standing commercial fisheries on the lower Columbia River.

Sportanglers are paying closer attention to ecosystem management. The world-wide trend for the important prey-based species such as anchovies, herring, smelt and sardines have new meaning for sportanglers as we’ve seen the average size of the salmon we’re landing dwindle in recent years. What’s really causing that? Has the ocean’s carrying capacity tapered? Are we overfishing our stocks? It’s time we care as some of the economics are now being developed to look at what is a ton of anchovies worth if left in the ecosystem? The price the commercial fisherman gets for a ton of anchovies destined for the international human consumption market is shockingly low; just $200/ton! I can tell you that’s not what I pay for a pound of anchovies when I go salmon, sturgeon or tuna fishing, it’s closer to $6.50/pound! And if I’m buying canned anchovies in olive oil for my homemade Caesar salad dressing, it’s $1.79 for about 3 of those little critters. How much would our 7-pound August coho weigh if there were an additional 5,000 metric tons of anchovies left in the lower Columbia River?

Now we don’t want to stifle new markets or prevent commercial fishermen from making a living, but we do want to know that these little fish will continue to provide the ecosystem benefits that we currently enjoy. But if we’re to learn any history lessons here, it’s that stocks of fish, no matter how abundant the species, CAN be overfished, excess abundance WON’T go to waste in our ecosystems and we won’t accomplish anything meaningful unless we work together.

This fishery is somewhat contained due to market constraints and the fact it’s conducted in state waters. We’ll have bigger fish than anchovies to fry (along with a multitude of other species) when we deal with the bigger federal fisheries law, reauthorization of the Magnuson Stevens Act. We’re really going to need a collaborative voice going forward for that conversation.