After 20+ years on the Oregon Coast, a depleted stock of sturgeon that contributed to the loss of a huge component of my guide business and an opportunity to work for the Association of Northwest Steelheaders, I find myself in disbelief as to the state of our inland fisheries.

Spring Chinook fishing is downright depressing, when catches should be peaking in mid-May, estuary sturgeon fishing should also be going gangbusters and Tillamook Bay spring Chinook should also be taking off. May is off to a flat start, but that’s likely due to water conditions more than depressed numbers. The most recent bump in migrating spring Chinook over Willamette Falls and Bonneville Dam look fairly promising, actually. We may just make prediction afterall.

I think what’s most stark however is the tale of the Clackamas River. Nearly 30 years ago, when I was crawling up and down the banks of the Clackamas, conducting creel surveys for the Oregon Department of Fish and Wildlife, the banks and river was alive with sportfishing activity and happy anglers. Annual catches for Clackamas River spring Chinook numbered between 3,000 and 5,000 fish. Last year, sport anglers took home fewer than 90. Next to no one fishes it compared to the 90’s, a metro opportunity gone wrong. Furthermore, Clackamas River spring Chinook are still being caught, just by the folks (like me) that have access to boats, and fish larger bodies of water such as the Willamette or even the lower Columbia during the months of June and July. That’s right, remember the white hot bite of 2015 during the drought conditions just above the Astoria/Megler Bridge? A lot of those fish that we caught were Clackamas and Willamette bound spring Chinook!

With the downfall of our tributary fisheries, we’re losing a critical part of our heritage that needs to be addressed, and soon. Nearly all of us avid anglers started our life-long passion from the bank. I spent countless hours on the Sandy and Salmon Rivers for winter and summer steelhead, coho and spring Chinook. Mr. Weeks from Math 10 at Mt. Hood Community College didn’t even question us when we walked into class 45 minutes late in October, he simply asked, “How many did you catch?” We’ve crafted, unintentionally, a big boat, big water, high caliber fishery that only a select few, relatively speaking, can participate in. Without tributary fisheries, we have no new recruits, we have fewer license and tag sales, it’s a social injustice that passionate anglers that don’t have boats and access to big water can’t participate in, and maybe most importantly, we have no future foot soldiers to take care of these fisheries when we’re gone.

The scenario that laid out 100 years ago for the commercial fleet, is now happening for the sport fleet. When gillnets wiped out salmon runs in most coastal estuaries, the commercial troll fleet started chasing them in the salt. Those mixed stock fisheries soon became over-fished too and we had our part when fisheries managers grossly over-estimated the number of coho we had available for harvest in the ocean. More sound fisheries management took place.

I hate writing about doom and gloom, that’s not really me. I’ll get a “check your gloom at the door” message once in a while from friend Chris Vertopoulos. And in reality, it’s not all doom and gloom but it’s important to keep in perspective about how it is now, and how it was just 20 years ago. Then go back even further to how it was 40 and 50 years ago, when the Pacific Northwest was considered the “Salmon Capital of the World.”

But more good news on the Western Front. Three more species just came off the over-fished list produced every other year by the National Oceanic and Atmospheric Administration. Try and gloss over the headline, “April 2018 was 3rd warmest on record for the globe.” Oopps, there I go again. Bocaccio, Darkblotched Rockfish and Pacific Ocean Perch are all on the rebuilt list, ahead of the original rebuilding time line. 235 stocks of fish are monitored, 200 are not considered overfished, 44 have been “rebuilt” after depletion, and we have 35 left to rebuild. The complete report is here.

My father-in-law Barry, follows my musings, but it’s gratifying to know that he too is paying attention to the headlines. He sends me articles every once in a while, which in turn, only makes me ponder even more. It’s been all too long since he’s been out here fishing with me, pottery in New Mexico is his passion these days. He took the time to send me this article, on just how big our commercial operations are world-wide. Opening line is, “Humans are now fishing at least 55 percent of the world’s oceans — an area four times larger than the area occupied by humanity’s onshore agriculture.” Now that’s a stark reality check.

We can be thankful that we’re doing pretty good in the good ol’ US of A. We have Congressmen Warren Magnuson and Ted Stevens to thank for that. The Magnuson Stevens Act is still working, ahead of schedule you might say, thanks in large part to two Pacific Region forefathers that knew we had something special in our marine resources. No matter how good we have it now, weren’t we always taught to leave it better than we found it? It appears we still have a few more lessons to learn. 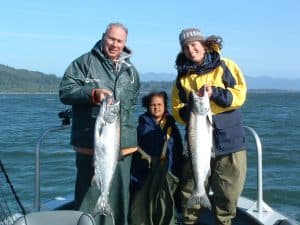