Salmon Shared Around the World

Well, maybe not around the world, but at least in Chicago. My daughter, Katri, caught her first salmon last week, just in time to bring it back to Chicago and share it with Grandma JoJo and some long-time family friends. They just don’t get this kind of quality seafood back in Chicago all that often, actually, never. It feels extra special to bring fresh salmon, crab, tuna or sea bass back to Chicago and New Mexico where my in-laws currently live. 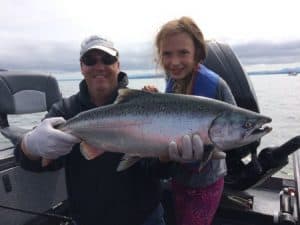 The first salmon my then girlfriend, now wife took back to Chicago, my in-laws asked if it was actually safe to eat. Keep in mind that mercury and other toxicity warnings are prevalent for Great Lakes fish, even its highly migratory salmon. The idea of consuming salmon that wasn’t purchased in a grocery store in the city seemed too foreign to be a good idea. They’ve since learned the value of the fish and crab we bring in during our holiday visits. Our smoked salmon is legendary on the North Shore, especially in Grandma JoJo’s condominium. If you’ve ever been to a North Shore grocery market, you’d know it’s not a high bar to surpass.

As the only hunter/gatherer in my family, I’ve always been a bit proud to put dinner on the table for those that appreciate it. I can’t quite explain it, but even before I started fishing and hunting, I grew a garden that I took great pride in. There’s something about the independence of it all, being able to gather a high quality food source for myself, friends and family to enjoy. The simple fact of the matter is, not everyone can successfully hunt or fish, just like I can’t drive a tractor without ruining something, or build so much as a picnic table without it falling down. People pay me a lot of money to have that same feeling when they take home a day’s catch.

So I’ve been waiting for almost 9 years, ever since I found out my wife and I were having a baby girl, to have my daughter reel in her first salmon with Dad. Other guides started their kids out earlier than I did, but I also knew the importance of not pushing the kid into the sport I find so rewarding. Much to her parent’s quandary, she’s more of a dancer than an athlete or outdoors girl, but we know how interests change over time; we remain hopeful.

I’ve had to come to the realization that she doesn’t get whipped into a frenzy about the greatest sport in the world. Her and I share the same sleep habits; late to bed, late to rise, but when I was her age, I got no sleep because I was so excited to go fishing the next day, it was an sickness. I was hooked before I knew what an addiction was, it was just in my blood, from both of my grandfathers. It took a crane to get her out of bed to pursue her first salmon last weekend.

And just as excited as I was about catching fish at an early age, I was almost as excited about protecting them too. I vividly remember a film (yes, there were no DVD’s or even VHS tapes back then) in the 2nd grade, about how polluted the Willamette River was in the mid-1900’s. Salmon were floating belly up due to pollution until Oregon great Tom McCall began addressing the issue and initiated an intensive effort to clean up the lifeblood of the Willamette Valley. Now the Willamette can see returns greater then 100,000 adults on a good year, of which only 20% are of wild origin (but that is another blog).

So how do you get an 8-year old invested in the future of Oregon’s natural resources? I can’t say I know the answer to that question, but I think no matter what the interest is for a young person, they don’t have much tolerance for someone who’s gumming up the system with pollutants or running an extractive industry without morals. Thankfully she’s ok with Dad dispatching her fish with a swift thwack on top of the head. Hunting may be a different story however…

I’ve often underestimated her breadth of knowledge on issues, and that’s likely my own fault for working a bit too much. Children do have a sense of ownership of this Earth however, they seem to know the state in which we’re handing off the problems we’ve failed to solve.

Thankfully, along with our colossal failures on many of the bigger issues, we are doing pretty well on managing our fisheries. Strong laws like the Magnuson Stevens Act have kept our extractive activities in check, and done quite frankly, a heck of a job rebuilding depleted stocks of fish. We’re over the hump on overfishing, and know what’s right for the future of our fishers, but we still have lots of work left to do. No one in my family had any idea how far I’d take my fishing passion, and there’s a whole army of fishers and fishing advocates out there yet to be discovered. It’s my hope that every child gets a chance to exercise their passion for the outdoors because our natural resources are going to need advocates for the future. Keep an eye out for those signs and give your kid a chance to experience all that the outdoors has to offer, our fish and wildlife are dependent on it.