Every New Year, my wife and one of her good friends make up a slogan for the upcoming year. I do not think the motivation was there for this year, maybe because it is hard to rhyme something with 2017. The title of this blog is as close as I could get. 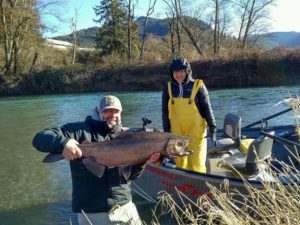 It’s hard to say how the 115th Congress is going to conduct itself this year. Many in the conservation community are walking on pins and needles. There are numerous bedrock laws that have benefitted sportsmen through the years, or in the case of the Magnuson Stevens Reauthorization, decades, and no matter “what side of the aisle” you sit on, Magnuson Stevens deserves a quick and meaningful reauthorization to keep our waterfronts working.

Also, it doesn’t really matter who’s in control of the house and senate in Washington DC, there are always attacks that roll back already-working laws that we should embrace. What will be critically important in this congress, and likely in the state that you conduct your outdoor recreation in, is to keep a watchful eye on the direction policy makers are taking on the future management of our fisheries and public lands. What’s more important is the realization that these lands are YOUR lands; these public resources are YOUR resources. And if there’s one thing all sportsmen and women can agree on, these resources should be managed for the benefit of ALL of the public, not just the special interests that “represent” our collective communities.

As we begin to witness the downturn of some very productive fishing in the years to come, we may indeed get a sense for how these fisheries will perform at rock bottom lows. I don’t really believe that we’ll see those rock bottom lows for coho that intertwined them into the Endangered Species List, but oceanographers are sounding the alarm that they’ve recently witnessed some very low productivity from the last sampling season. Call my naive, but with all the work we’ve done to recover wild coho, and the returns we’ve recently seen, how could we dip so low again in our lifetime? Well, stand-by on that one, the coho prediction won’t come out for another few months, but I’m not optimistic.

Not only did ocean going coho face El Nino conditions and the warm water blob, but the coho that will return this fall (or hopefully return) were fry in 2015; one of the warmest summers of prolonged dry weather in history. The coho fry of 2015, were the coho smolts that migrated out in the spring months of 2016, and the returning adults of 2017. There was tremendous mortality of the fry of 2015, ironically, coming off a huge return of adults in 2014 (nearly 360,000 adults). Yeah, we’ve had our cake, and we could eat it too.

It’s pretty easy to be lackadaisical when returns are good, but sportanglers are going to have to step up as reality sets in and our abundant natural resources become painfully more constrained. The spring Chinook predictions are already in for NW Oregon’s 2 major rivers, and fishing seasons are certain to be more conservative than in previous years. It might be something we’ll have to get used to for a few years, hopefully, only a few years.

Most anglers will let the shock of this low prediction roll off of our back but rest assured, we have everything to do with it. Between the hydropower system that changed the river function of the mainstem reaches of the Willamette and Columbia Rivers, the impossible barriers (culverts, smaller dams) that cut off the historic habitat ranges of juveniles that rear in these watersheds and adults that spawn here, the lethal summer water temperatures that exist because we’ve compromised the ability to shade our rivers and even our hatchery practices that release tens of thousands of smolts at one time, making them easy prey for predators, and the list can go on and on… I guess that’s why they call it a run-on sentence.

Fortunately, there are fish conservation organizations that do pay attention to these issues, but no matter how big their memberships are, you deserve your time on the soapbox, you deserve to be heard.

There will be plenty of platforms to speak from in 2017, both at the state and federal level, heck, even at the county level and since the fishing won’t be as good as it was during productive ocean and river cycles, you might find yourself with plenty of time to advocate your view. Join us as we journey through the New Year and find ways to continue to keep our fisheries viable, our smokers filled and our citizens engaged, but most importantly, develop a plan that enables our future generations of anglers to witness what we have witnessed so they don’t say, “You should hear how good the fishing was when my grandfather was alive!” Healthy, abundant stocks of the fish we care so much about, is what they deserve.