The Albies are Coming!

We live in an amazing world. After a two-year tuna hiatus, I finally got to go out in pursuit of albacore off of the Oregon coast. Albacore, despite it’s incredible fighting power and deliciousness is still supposed to be a second-class fish amongst avid salmon and steelhead (cold water) anglers. But anyone who actually has had the opportunity to pursue this species understands that it is, pound for pound, the hardest fighting sport fish most west coast anglers can pursue.

Now never mind the incredible strikes these fish produce on troll gear or by casting jigs for them and good for you if you have the gear to fish live bait for albacore, but being in the offshore ecosystem of these incredible sport fish is a treat unto itself. Several different species of whales, Albatross, Villella jellyfish and incredibly colored blue water are just the things we can see. After spending so much time understanding the nearshore ecosystems, it’s like being in a whole new unexplored world for this fisherman.

What is really amazing to think about, is the fact that many of my fellow anglers, let alone fellow Oregonians and Pacific northwesterners never get to see this incredible and dynamic offshore ecosystem. And as they say, out of sight, out of mind. As our regional population continues to grow, how long will it be before I see a sea of fishing vessels in pursuit of these incredible fish? How long will it be until this abundant species joins the list of overfished populations of bluefin tuna? The most people know about this open water is a giant plastic gyre patch that only breaks down even more following every storm event.

The life history of an albacore is interesting to learn. Despite the fact they can live to be 11 or 12 years old, they rarely reach weights greater than 40 pounds. Also, over 90% of the tuna landed in North America is destined for the canned tuna market. Some of the folks I’ve shared fresh albacore with are hesitant at first, thinking it all tastes like canned tuna. That was my prejudice as well until I had my first grilled yellowfin tuna in Costa Rica one winter. Those that haven’t tried fresh grilled tuna, I tell them it is like a fine cut of pork tenderloin, except tender.

I think what is most incredible about these fish, is the ecosystem that can support them. There have been times where I have seen countless small schools of tuna chase bait at the surface. On a rare day, when you get flat calm seas in September, the tuna grounds are alive with biomass. I have a fellow fishing guide friend tell me just the other day, they stopped over a school of albacore that must’ve numbered in the thousands. They had plugged their boat in less than two hours with 45 tuna, iced and headed for port. How can what seems to be a biological desert, be so rich in marine life? We’ll just never know, until we get down there and start swimming with these schools of albacore.

Of course, examining stomach contents will give one some indication as to what lies beneath the surface. Here is what was in the stomach of one of the fish I retained for my home pack: 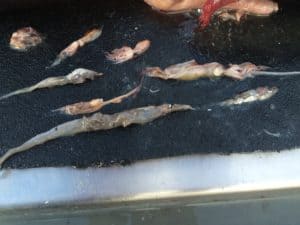 If these fish can really put on 25% of their body weight in any given day, how can such a food web produce such a fantastic product? A simple examination of their stomach contents always seems to reveal some surprising facts.

My most recent catch clearly showed a diversity of diet. As you can see, squid, Pacific Sand Lance, and juvenile octopus made up a fair bit of this tuna’s final meals. Of course some of the other species were unidentifiable but I’ve also seen juvenile hake and certainly anchovies in the bellies of these fish. One thing seems fairly consistent however, they don’t seem to go hungry here.

The daily limit for albacore is very generous; anglers are allowed a whopping 25 fish per day with no annual limit. Rough seas and the incredible effort alone to prepare for an albacore trip are limiting factors in of themselves and when fishing is good, no one in their right mind really wants to land 25 of these fish on their own. The time it takes to process them properly dwarfs the time it takes to catch them. It is an incredible fishery however.

We’re entering peak season for albacore now, hopefully you get to take advantage of what looks to be another great year. Keep in mind however, that if you have the privilege to pursue these fish, enjoy the wonders of another one of Earth’s incredible ecosystems and what it takes to function properly but more importantly, what it takes to malfunction. Also know that laws such as the Magnuson Stevens Act were meant to protect these ecosystems for future generations of sport and commercial fishermen. Let’s keep these laws strong and effective so our children can spend time catching these incredible fish, instead of having to protect them due to overfishing. 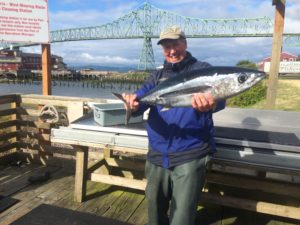