The Best Birthday Present Ever; Preserve the Integrity of the Magnuson Stevens Act

It’s different here, in Washington DC. I don’t often find myself traveling 3,000 miles for a birthday party but here I am, walking the halls of congress, telling the Oregon delegation of the importance of preserving the most important components of the Magnuson Stevens Act (MSA). I’m also daring them to reach for visionary amendments in the next iteration of the 40-year old law that has kept populations of fish in the Pacific Northwest at sustainable enough levels for sport and commercial fishermen to harvest.

This blog post may not be as fun to read as a fishing trip with Buzz Ramsey or Jim Martin but it may be the most important blog post of my tenure as a blogger yet. It may be a good thing that most fishermen don’t need to know much about the MSA, largely, because it’s working. None-the-less, today, or this week, a simple call to your Senators offices (Senator Merkley or Senator Wyden) can make a big difference in the entire sustainability of all species that reside in salt water. Hard to believe, a simple phone call can have such a big impact, but I’ll tell you why.

Oregon has identified itself as a leader in forward thinking, at least at the Federal level, when it comes to fisheries management. Since “Big Blue” has such a multitude of species (mixed stock fisheries), and the incredible potential for significant consequences in bycatch management, we need a visionary law that protects us from overharvest, protects our forage prey base and takes into account a multitude of factors through ecosystem based management, not single species management. These are all components of the MSA, but last year, the House of Representatives passed HR 1335, also known as the “Empty Oceans Act,” with such key words as “flexibility,” and “where practicable,” (let’s just call these “loopholes”) that opens the door for consumptive users of this limited resource to over-take what should be a renewable resource.

You might guess that these rollbacks didn’t come from our Oregon delegation but from the East Coast Congressfolk that are at ground zero for the crash of the cod and Bluefin tuna populations. I’m not sure what better example one might need to understand what overharvest really equates to, maybe a trip to cannery row, or a quicker one to our own Astoria, where the sardine fleet no longer exists, neither do the salmon canneries, or the albacore canneries or a robust groundfish fleet……… I could go on.

We, the Oregon trio of Paul Englemeyer of Audubon, Lyf Gildersleeve of the Flying Fish Company in Portland and myself, representing the Association of Northwest Steelheaders took to the Oregon offices in hopes of raising awareness of the positive impact that the MSA has had on our fisheries. Due to a period of high ocean productivity, we saw a rapid rebound in lingcod populations and a liberalization of recent restrictions on species such as canary rockfish. These are just two examples of outstanding species that contribute greatly to the coastal economies of the west. 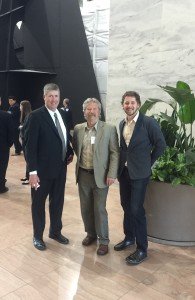 Now, if a fishing guide (myself), cormorant protector (Paul) and gillnet supporter (Lyf) from Oregon can all spend 3 great days lobbying together for a common cause on fisheries management, wouldn’t you just think that Congress could get their act together and support a success such as the 40-year old Magnuson Stevens Act? It’s really not a high bar to cross.

We took it a step further with the Oregon delegation however. Besides maintaining the necessary improvements in MSA that took place in 1996 and 2006 that stopped overfishing on sensitive stocks of fish, we asked the Oregon delegates to be the voice of new, visionary measures such as preparing for how climate change will impact the ocean and how ocean acidification will affect the future of shellfish fisheries in our oceans. Due to the recent successes of measures such as protecting unmanaged forage species on the West Coast and improvements in historically “dirty” bycatch fisheries such as the shrimp trawl fishery, we have much to be proud of in Oregon. It’s the perfect platform for our Senators and Representatives to push the envelope even further, in preparation for a future that doesn’t look so friendly for fish.

Not only is it important for us to celebrate the 40-year success of this law, but now, more than ever before, it’s time for Congress to come together as representatives of our oceans and its resources and exercise bipartisanship just as Warren Magnuson (a Democrat) and Ted Stevens (Republican) did so many decades ago. These two respected Senators saw the writing on the wall and enacted the landmark law that now enables us to sustainably harvest for generations to come.

So take a minute and call Senator Jeff Merkley’s office or the office of Senator Ron Wyden and tell them, in your own words, why it’s important to support the current version of the Magnuson Stevens Act and even reach a bit higher with visionary provisions that help us manage these resources into the future. Now is the time to show strong support for MSA, it’ll be the best birthday present you can give your next meal of halibut, salmon, rockfish, lingcod or tuna. Don’t wait on this birthday wish, we all know what happens when we let the candles burn too long.