The Building of a Conservation Army

The Association of Northwest Steelheaders just completed their 3rd annual Family Fish Camp at beautiful Camp Angelos on the banks of the Sandy River in Troutdale, Oregon. Of course we ordered up a nice batch of weather to go along with some monster trout donated by Desert Springs Trout Farm and stocked with a slew of 8” to 10” rainbows by Brian Trout Ranch. Pulling off the event is a feat in of itself, big thanks to Alllison Dobscha for making it all happen. 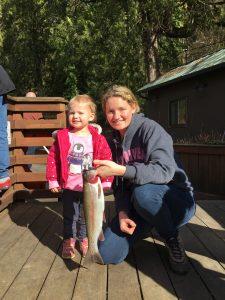 Even after leading the Steelheaders for the last 4 years, it’s utterly amazing to me how the troops roll out the carpet with sponsorships from KastKing Rods, Tom McCall Chapter of the NW Steelheaders, Camps for Kids, National Wildlife Federation, Saling Foundation and the Jubitz Family Foundation to ensure the next generation of conservationists know why our natural resources are worth protecting. And as if that wasn’t impressive enough, the volunteers that come cook, clean and teach is breathtaking. These people want a future for our children and so many work so hard to make sure that happens. I may have the greatest job in the world!

It’s not without frustrations however. The more I delve into the politics of fishing, the more I understand the need for a conservation movement. Our fish populations are in the state of depression that they are because we were not keeping watch. That has changed in the last two decades, but we must not be yelling loud enough, our messaging might be off, or we’re spending too much time bickering between ourselves on what’s right for the resource that we’re not paying attention to the bigger fish that need to get fried.

This is what makes the Marine Fish Conservation Network so unique. We are a network of sport and commercial fishing interests, along with certified smarties in other sectors such as the slow food industry, working together to achieve a common set of goals. The Network has peaked and valleyed, but every time the Magnuson Stevens Act is up for reauthorization, we seem to all come together again to ensure we turn sausage (otherwise known as legislation) into sand dabs (or insert your favorite marine fish here) so that sport and commercial sectors can benefit, along with the rural communities they support. Priority one for the initiative however, is to ensure the next generation of angler or commercial fishermen has the same opportunities we did. As I often sit around the table with my favorite friends, that doesn’t always work out.

Salmon is the prime example. Although somewhat governed under MSA (I say somewhat as salmon are governed under about every agency it seems), we’re seeing a dramatic downturn in salmon populations right now and I’m not sure any law will reverse that, particularly for the long-term. Groundfish are a different beast however.

Salmon fall under so many different governing jurisdictions because of their broad home range. A salmon born in the Snake River in Idaho migrates through numerous hydropower systems and stagnant reservoirs before it even gets to the ocean. The mouth of the Columbia River, predators including fishermen and wildly fluctuating ocean productivity determines how successful they will be to make the spawning run back home. Many rockfish species live their entire lives within a few miles of where they were born. They’re not susceptible to the rigors of species with broad home ranges.

Simply put, if we mess up management of such a simple-minded species such as groundfish, we really should be wearing the dunce hat in the corner of the classroom. Either that, or there’s some really powerful special interests that have steamrolled us while we weren’t looking.

Which brings me back to our legacy. Many of us weren’t raised knowing how to fight for our natural resources. Forty years ago we had it fairly good, we had no real reason to go toe-to-toe. The Steelheaders however were “born” 58 years ago, in an effort to sweep steelhead into a sportfishing category versus a food fish category, effectively taking them off the menu for the gillnet fleet to harvest. That battle was won under the leadership of Republican Governor Tom McCall (note above Steelheader chapter (Tom McCall Chapter). Republicans historically led the charge on conservation, these days it’s Democrats. Regardless, MANY Republicans AND Democrats come together to pass laws that ensure a future for hunters, anglers and those that just wish to view wildlife; all critical constituencies that fund the conservation missions of our collective natural resource agencies.

It’s time that we come together again, not as Democrats or Republicans, but as US citizens, to ensure the fishing stories we tell today, are told by our children’s children tomorrow. In the face of an acidifying ocean and a degraded landscape, we’re going to need to build an effective conservation army. Join us in winning a future for all our families.