The Lay of the Land

The rain has set in. Maybe it’s not officially winter just yet, but cold, damp and darkness is in the air, and we’re all supposed to have our freezers full of fish, and turn our attention to terrestrial species. My elk hunt starts on Saturday, November 4th, and I’ve been anxiously awaiting to finally shake the salt from my skin and get to the more sparsely treed region of the state, where one can see wildlife across the landscape, not really possible in the Tillamook State Forest, given its dense Doug fir stands.

I’m 22 years into my Oregon professional guiding career and even though I’ll be 350 miles away from “work,” I’m pretty sure I’ll still be looking at the hydrograph and wondering when I’ll get back on the water in pursuit of late-season Chinook. Frankly, these days however, I’m a bit more motivated by any opportunity to pursue lingcod or sea bass, a perfect fish and chips winter treat. Due to a quota that most would say was prematurely attained, the soonest that would happen would be January 1st.

Maybe more bizarre, was my presence at the Longview coal terminal rally on Thursday (November 2nd). Still at stake is the concept of siting a coal terminal on the banks of the lower Columbia, so we can export cheap coal to China and other Asian countries, as a source of energy. I think the quote of the day was, “We can no longer plead ignorance as to the effects of coal on our ecosystems!”

An October 3rd article in The Guardian talks about the current state of our oceans and how carbon emissions are not something we wait for to intensify, we’re already feeling the effects, even in my home state of Oregon. The article states how juvenile oyster spat are already dying at alarming rates due to acidifying oceans, and if it wasn’t for some quick solutions thanks to science, there likely wouldn’t be an oyster industry on the Pacific Coast. The article also states that 70% of the world’s fish populations are currently being over-exploited as we speak. It seems we’re still far from solving the crisis on a world-wide scale, no matter how well our US fisheries are managed.

As we plied the waters of the lower Columbia, taking a television reporter and cameraman to visit the site where the coal terminal is likely to be constructed, it was also odd seeing empty fishing shacks, and having the boat trailer parking lot all to ourselves. Even the fish think it’s time to go terrestrial.

Fishermen are retreating to their wood stove stoked homes, hopefully with enough cash flow to carry them through the winter months. It seems it’s getting more difficult to make a living as a fisherman, and depending on what piece of legislation progresses in Congress, it may become even more difficult.

We’ve been reporting on Congressman Don Young’s HR 200. Anytime you see the word “flexibility” in the title however, you may want to be skeptical. Flexibility is best left to fisheries managers, not politicians. Congressman Garret Graves Bill would wrestle management away from the federal government, and hand it over to the states. Local control always sounds better, but provisions in this bill would allow for overfishing, putting future fisheries, both recreational and commercial, at risk.

It’s hard to wrap our minds around why we should care about these attacks on the Magnuson Stevens Act here on the Pacific Coast, but the fact of the matter is, it opens a door, sets a precedent, as to how fisheries can be managed in other regions of the county. Just imagine, what if we were allowed to continue to harvest lingcod, seabass and cabezon after the mid-September closing. With great ocean weather this fall, and abundant and willing stocks of bottomfish, we’d put a significant dent in the population and future recruitment would be compromised.

In all that we don’t know about our fishery abundance, it’s been an appropriate trend to manage more conservatively, not liberally, and it’s served us and the resource well. In years of clear abundance, we have ample opportunity. In years of declining abundance, it’s best to get ahead of the curve, and stave off longer rebuilding timelines that would be required to ensure a future for our fisheries. That trend started 2 decades ago, now is not the time to turn back the clock. 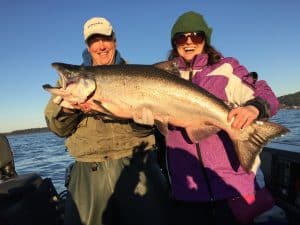