The Streets of San Francisco

After guiding for about 60 days straight, I decided it was time for a vacation. After all, I hardly had any time with my daughter all summer, and my wife was headed to Chicago for her I won’t say how many year class reunion. I can entertain my 8-year old on the water, but one on one, stuck in Oregon City, I was needing some help; California Great America and Six Flags Amusement Parks, here we come!

Of all the years and all the months I could have picked however, I picked the one where wildfires were taking out entire neighborhoods and compromising my weekend with my daughter. I know, compared to the tragedies of those that lost their homes and vineyards, I had nothing to complain about. My sympathies to those left homeless.

Our trip started out flying into the bay area, obviously. I have been there before, and even though my view was somewhat obstructed by the smoke, the bay delta tells quite a story from 10,000 feet above. The landscape modifications, the loss of wetlands, and the sheer number of people that live in this area has certainly taken a toll on the regions once abundant (maybe 200 years ago), fish and wildlife species. Now, the delta is laden with invasive species, a once freshwater ecosystem is now saltwater because of the water extraction that goes on in the basin, and freshwater sportfishing opportunities are dwindling by the day it seems. Some of my fishing customers that I have the longest history with come from the bay area. Most of my guide friends know them already, the Slusher brothers, so passionate about fishing they’ll come visit every year just to have some semblance of hope that wild salmon still do exist in nature.

After a good dose of human density and concurrent road rage associated with human density, we finally made our way to Santa Clara, ready to recreate at Great America. I had been there as a kid, I may have been more excited than my daughter in going back. Although far from my idea of pure entertainment, we enjoyed our day riding roller coasters and attempting to win prizes worth a fraction of what I was paying trying to win the darn things. All part of the program however.

After continuously checking the air quality to the north of San Francisco where day 2 was supposed to be at Six Flags, I was pleasantly surprised that the destination was actually a possibility. The winds clearly shifted direction, so to the north we traveled, in anticipation of more fun and adventure. This is where I was a bit awestruck.

Somehow, we spent a good part of an hour in the “Ocean Discovery” section of the park, visiting the lone walrus, a couple dozen penguins, and a handful of harbor seals and California Sea Lions. Although the walrus and penguin exhibits were fun to look over, I had rides on my mind. And from the lack of density of other visitors, I think everyone else did too. I had to call it quits when my daughter asked if we should buy a pound of smelt to feed the seals… I had to tell her I had done enough of that this summer, except with sport-caught salmon. They were plenty “full.” Call me shallow.

As we continued around the park, viewing the menus of the different junk shacks to eat at, I came to the realization about just how few people know about where their seafood comes from, and how come we still have seafood to harvest (leave out the last remaining California salmon mind you). I couldn’t bring myself to look at the Seamoore Cott’s Fish and Fries menu, but I’m sure I didn’t have an appetite for it, especially after going on Medusa.

How do you engage the vast majority of society in critical fisheries issues when they don’t even know where their food comes from? And from the head count at the walrus exhibit, I don’t think many people, park-goers for sure, even care.

As a battery of bad bills remains queued up in Congress, thankfully, commercial fishermen and sport anglers are paying attention to what’s happening. Rollbacks in the conservation gains we’ve made under the bi-partisan supported Magnuson Stevens Act are under threat. While some sport angling groups in the Gulf States support these rollbacks to gain more access to certain stocks of fish, it’s bad business for those that support a legacy of opportunity for our future fishermen.

We’re still working on a bill that can pass the litmus test for both conservation and opportunity, but those can be hard to come by in today’s Congress. If not for the fishermen, who would pay attention to our fisheries that have come back from our overfishing days just 3 decades ago? Certainly not my fellow theme park goers, and most of America for that matter.

And for your entertainment pleasure, here’s a few words from Slusher Brother Rich, long-time friend, client and all-around super dude:

Fish Do Not Care About Borders

It seems that humans are the only members of the animal kingdom who care about drawing arbitrary lines on a map and then making a big deal about who should or shouldn’t stand on either side of those lines. While fish are not afflicted with this trait, they are often the victims of it. The fish are unaware of the differences in rules, regulations, politics, etc. when they change GPS coordinates.

I am a native (Northern) Californian who for 63 years has fished extensively in California, Oregon and southern Washington. On my sojourns north, I have been (falsely) accused of introducing Tui Chub into Diamond Lake, littering highways, catching all of your fish, and even buying up all of the local gasoline. I thank heaven that I have an iron-clad alibi for the day Mt. St. Helens erupted. As for driving up real estate prices, to those looking to buy, I am sorry and to those who are selling, I say “you’re welcome”. In all honesty, my accusers (who were probably transplanted Californians) can be counted on one hand.

My point being is that those “comments” came from humans obsessed with lines drawn on a map. Fish swimming in the oceans, bays, and rivers in Washington, Oregon, and California are happily unaware of any such delineations. The problem is, that each State, County, and City that they pass through may have different ideas as to how to treat them, and those ideas may sometimes be at odds with each other.

I believe that it has been documented that certain salmon caught in the ocean in Oregon were destined for the Klamath River system in California. Sturgeon tagged in the Columbia River have been observed in San Francisco Bay and the Delta. (Most likely there are SF Bay sturgeon in the Columbia River but it is unknown whether any of them are responsible for driving up real estate prices.) Fishing regulations for salmon and sturgeon are significantly different in Oregon and California, but each affects the other.

I have fished long enough to witness the decline in fisheries in both California and Oregon. Sturgeon, Striped Bass, and Salmon populations in the San Francisco Bay and Delta are fractions of what they were in the 1960’s. I used to fish for salmon at the mouth of the Klamath River in the ‘60’s during August and September. The number of boats and fishermen crammed into a small space were equivalent to what the peak of the Buoy 10 season looks like today. The amount of salmon caught supported a small shore-side cannery and fish smoking business. A small Coast Guard station was needed to keep the boaters safe. Today, it is a ghost town and the number of salmon swimming upriver are a small remnant of that era. 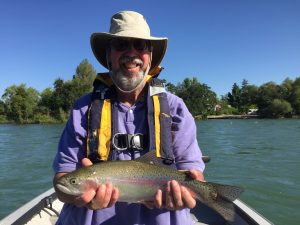 Rich Slusher of the bay area with a Sacramento rainbow.

The decline on the Klamath and other nearby systems has paralleled similar (if not as severe) to declines in Oregon and Washington as well. These declines did not begin or end at State, County, or City borders, but have impacted the fisheries as a whole. It is up to us “humans” to erase those lines on the map and look at an all-inclusive (California included), collaborative, solution to the problems.