The Synapses Are Firing

When you can’t get it done on the ground, you often go to court. It’s a bad way to do business, no matter if you’re the good guy, or the bad guy.

I’ve been at odds with the Tillamook County Board of County Commissioners for most of my professional life. Tillamook has two nicknames; the land of cheese, trees and ocean breeze and the Indian name, the land of many waters. You can see why this county might also harbor a lot of fish. Tillamook County is where I’ve made the better part of my living as a fishing guide for the last 20 years.

Well, Tillamook County, along with 14 other counties, are going to court. They make up what is called the Trust Land Counties. At the crux of the matter: how state forest lands in Tillamook County are managed for timber harvest.

The conservation community has long fought timber interests (including our county commissioners, one of whom is formally the district forester for the Tillamook State Forest) on this exact matter. The Board of Forestry has twice reaffirmed the Greatest Permanent Value statement, which essentially states our state forest lands should be managed to provide, “healthy, productive and sustainable forest ecosystems that over time and across the landscape provide a full range of social, economic and environmental benefits.” Seems like something everyone can live with, right? Well, the vast majority of Oregonians anyway.

I quit counting how many different ways till Sunday that one of the Tillamook County Commissioners, Tim Josi (maybe not so ironically the chair of the trust land counties), have tried to change this language, administratively and legislatively. Hence now, the litigation. If these county commissioners fought half as hard for fishing related jobs in Tillamook County… wow.

These last few years have been hard on fish. Record setting stream temperatures, fish die-offs, El Nino and the Warm Water Blob have all had their day in court. Couple that up with 5 or 6 flood events in Tillamook County in the winters of 2015/2016 and you don’t have many fish friendly conditions for the next few brood years.

Trees, mostly of the older variety can change some of those factors. Here’s why:

Ten or fifteen years ago, when I was pushing hard for a different approach to forest management, there were no packed rooms full of forest advocates. Last night (December 14th), that was different; the synapses are firing.

Dozens of Clatsop County citizens were engaging their Clatsop County Commissioners on whether the county should opt out of the $1.4 billion dollar Linn County lawsuit that will “reimburse” counties for lost timber revenue, since the Board of Forestry has adopted the Greatest Permanent Value Rule in 1998. There is much at stake with the ruling.

Tim Josi states that this is NOT an attempt to change the current Forest Management Plan, but a reimbursement since the lands aren’t managed for maximum timber yield any longer. Well, with the State of Oregon already in a $1.7-billion-dollar budget shortfall for the next biennium, why wouldn’t the state want to just dig into the education, senior and veteran services and natural resource agencies budget just another $1.4 big un’s?

The bigger worry, if these buffoons actually win this lawsuit, do you think our state’s lawmakers are just going to want to continue these kind of welfare payments to the counties on an annual basis, or are they going to want to modify the state’s Forest Management Plan? As a fisherman, I like the plan since it accounts for wild salmon as a forest product too. 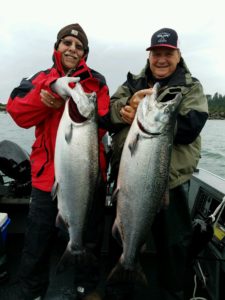 Regardless of what happens, the real win came when the conservation community showed up last night. Environmentalists, conservationists, teachers and those in the tourism industry, all working together to protect some of our state’s greatest natural resources. This will have to be the strategy of the future if we intend to keep the natural resources that attracted us to the Pacific Northwest. The Clatsop County Commission is a good one, let’s hope the synapses keep on firing!