As a steward and consumer of recreational fisheries resources, of course I am going to advocate for a recreational priority, and not just for the economics of a fragile resource.

Recreational fishing often has a lighter touch on the resource, from an extraction and consumption point of view. We don’t use trawls to harvest our catch and we often just catch our quarry individually, instead of en masse.  When your resource is of finite quantity, there are justifiable reasons to employ a softer touch method of harvest.

Now although I don’t know the intricacies of other sportfisheries across the nation, I have met enough qualified anglers to at least be educated on what’s right and what’s wrong in the different coastal regions where sport and commercial fisheries collide. It’s my understanding that the gulf coast states are quite embattled in the red snapper allocations between the sport and commercial fisheries. The commercial fleet has better access to that particular stock of fish due to their geographic location and accessibility. The sport fleet had a paltry 3-day season, which is nothing short of shameful given the economics such a fishery can produce.

I don’t know enough about this fishery to offer, let along understand, any solutions to such a quandary, but what sticks out is the absurdity of sportfishing advocate groups supporting The Modern Fish Act, which as defined by the law if passed, would legally allow ACL’s (Annual Catch Limits) to be ignored for the benefit of one sector. This article printed in the Mongabay publication states, “Under the proposed Modern Fish Act, a loophole would be introduced: annual recreational catch limits would no longer be required for stocks whose fishing rates were being maintained below their federal target, and ACLs would be removed for fisheries in which overfishing is not occurring.” While that may sound like a good thing for recreational fishers, the article goes on to say, “If you stop setting those levels just because the fish are doing better, you’re going to end up back where you were [with a depleted fishery]. The Modern Fish Act is basically saying ‘hey, the diet worked, problem solved, let’s go back to eating pizza every day’.”

I’m not sure I could reference any anglers in the Pacific Northwest, at least any angler that I prefer to associate with, that would think that if we opened up a consumptive fishery for wild coho salmon on the north Oregon coast, knowing that it would further degrade the possibility for a quicker, and more robust recovery that would offer greater benefits to all users in the future, that we should relax scientifically based information that compromises the rebuilding of said stock of fish. With all the regulation sport anglers have come to endure over the past 2 decades, if there’s one thing we’ve become unified on, it’s that extraordinary measures are necessary to ensure a resource for future generations of anglers, and we’re willing to be sidelined to ensure that possibility. There have been many examples to prove this.

The one that most recently sticks out in my mind is when the Oregon Department of Fish and Wildlife opened up the conversation about the Coastal Multi-species Conservation and Management Plan of anadromous fish along the Oregon Coast. It could be argued that these runs of fish may represent the last significant stronghold of wild salmonids that could last into the future. With sparse populations of humans, relatively speaking, and few barriers to fish passage, again, relatively speaking in comparison to inland waterways, we have a real chance at recovering these wild runs of salmon and steelhead. Some even remain abundant to this day!

During the lengthy public process that the department went through, the original proposal offered up a rare opportunity to harvest wild steelhead on the Trask River. An initiative that I thought would never come back. After losing harvest access to 5 of the 6 wild stocks of salmon (wild steelhead, wild chum salmon, wild spring Chinook, wild coho and wild cutthroat trout) when I first started my guiding career, a return to catch and keep fisheries was nothing but a pipe dream. I’ve certainly been thankful for return opportunity for wild cutthroat trout (which I call a youngster’s gateway drug), and wild coho salmon, which has salvaged more than one poor Chinook season for me, our fisheries management is proof-positive that we can return to a more responsible harvest regime without compromising the recovery of sensitive species of fish.

Nobody is sure how, if passed, the Modern Fish Act may affect west coast fisheries, but how dare you bring such an archaic concept to the federal table. I guess this is one time where we can be thankful for Congressional dysfunction.

I continue to be proud that the northwest sportangler understands and advocates for sound management of our iconic stocks of fish. No one wants to be sidelined for opportunity many of us consider our God-given right, but more importantly, all of us want the same opportunity we’ve enjoyed in our lifetime to be handed down to the next generation of sportangler. This resource is finite, we know that now. To squander away future opportunity for short-term gain is a non-starter for us on the west coast, your politics are not welcome here. 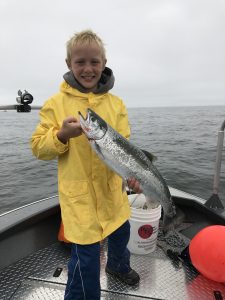 Charlie Foster with an ocean caught coho salmon outside of the Columbia River. Charlie released several wild ones before getting this hatchery fish.