It’s quite the unusual summer salmon season here at the world famous Buoy 10 salmon fishery on the lower Columbia River. So much anticipation, so many reservations, unprecedented investment, all for a failed salmon run? You may not read this headline in your local paper this week or next, but I have to believe it may be coming in the not-too-distant future. 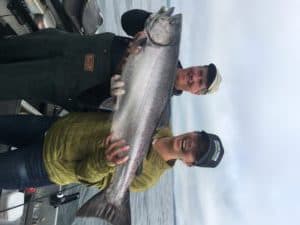 Anglers have been pounding the water hard since August 1st, most coming up empty handed unless it was just your day. It seems luck is playing a larger than usual role in the success of Oregon’s most popular fishery this year, and as the saying goes, I’d take luck over skill any day of the week.

This particular (Buoy 10) anomaly takes me back several years when I viewed my first “ecosystem services” restoration project several years ago. I was so inspired by the project (on my favorite river, the Necanicum, near Seaside, Oregon), that I forced my way into writing a story about it in our statewide paper, The Oregonian. The story was titled “Wetlands Bubble Back,”  and was about a very thoughtful lady that still lived on a farm, along the banks of the Necanicum. But after I first toured the site, I left in awe that humans finally had the capability of looking beyond the most current crisis and took a more holistic view of how to problem solve. In other words, coho were freshly listed on the Endangered Species Act and nobody was paying attention to the entire ecosystem that revolved around the life cycle of the coho salmon. My take-home was simple; we don’t even know, what we don’t know. I guess there is financial justification for “ongoing studies and monitoring.”

The same rings true in what likely remains our greatest mystery, and I’m told we know more about outer space, then we do about the Earth’s oceans. It’s high time we pay attention. Our ocean provides the rain that waters our crops, the weather that jumpstarts our ocean ecosystem, and the seafood that feeds our world; I know, no big deal, right?

My point in all of this is two-fold and my fellow anglers are asking at least one of the same questions that I am:

Well, I’ve been doing some more reading (always a real danger as a fishing guide), and I’m becoming increasingly more concerned about this warm water blob. Scientists believe it to be of unprecedented proportions and if you read this National Geographic Article, you’d have a hard time disagreeing. But then take a look around you, at what’s happening, just on the lower Columbia. We still have active pods of whales, humpbacks I believe, aggressively feeding in the lower Columbia, there is an odd absence of the common murre (according to the NatGeo article, many have washed up dead on our ocean beaches in recent years), what few salmon we’re catching, and I do mean few, are small, just over legal size or jacks themselves. And did I mention the gross over-prediction of Willamette River spring Chinook and Columbia River summer steelhead, not to mention last year’s coho run? Something’s not adding up. Thank God we’re seeing some fair numbers of jacks so there may be a future in fish guiding afterall.

I think what was most shocking was the absence of krill, a critical food source for much of the ocean’s sea creatures, including salmon. If there’s one thing that every fisherman can agree on, it’s the importance of our protecting our forage prey base.

Now going back to lessons earlier learned, I have historically blamed our land management practices on the demise and decline of our wild salmonids on the north Oregon coast. I think most fishermen also know that the ocean is likely the strongest driver in the success or failure of returning adult salmon to our watersheds, but I used to say humans didn’t really have a way to control our ocean environment. While that may largely still be the case, no one is saying we aren’t having a hand in destroying it anymore.

While I have no clear solution on how to restore our ocean ecosystems (I’m sure open to suggestions), one thing is for sure, building ocean resilliance is not only going to help solve this future crisis, it’s going to be necessary if we want to sustain it. And as you’ve heard me say in many blog posts before, passing common sense laws and policies such as the Magnuson Steven’s Act is an important place to start.