When Salmon Fishing is Slow

The Johnny G group from California has been fishing with me for about 7 years now. These veteran sportanglers pursue many of the same species we do up here, and more. Steelhead, salmon, lingcod, sea bass and albacore are all options for these Cali kids just like they are for us Oregonians. We just seem to have a greater abundance of them compared to their home state.

These guys often just come for the salmon. The legendary runs of Tillamook Bay have brought past success to these anglers, so much so, they don’t mind a different option since they’ve seen the best of the best.

As many already know, the Chinook salmon run on Tillamook Bay has yet to strongly materialize, although it is certainly still early to call it a bust. After last year’s strong coho and chinook return, they certainly came with high expectations. Thankfully, September offers many possibilities. These are the kind of guys that check in nearly daily as their trip nears, making sure I know they’re open to other options if the fishing is poor. Such was the case this week on Tillamook Bay.

Fortunately, the lower Columbia river was filthy with biting Coho. The one and a half hour, 10 fish limit certainly brought a new benchmark to their program. The Coho were biting like piranhas in a south American river. The lower Columbia rarely disappoints in August and September.

The draw of a large Tillamook chinook, and the possibility of a calm and welcoming ocean, was just too great for them. Their third day was mostly motivated for large ocean Dungeness crab, but the lure of a large Chinook loomed in their minds. Finally, after about three hours of effort, Robert Murray hooked into a nice chinook salmon on the turn, just off of the tip of the south jetty. Unfortunately, as he got it close to the boat, the curse of the barbless hook kicked in and the Chinook, estimated at about 15 pounds, swam off.

Prior to that sign of promise, the guys had already indicated their interest for any nearby bottom fishing option. Johnny G had left his bottom fishing tackle in the car, so a trip back to port was in order. It was not a tough decision since the bite had been so slow.

At high noon, we headed our way south, still leaving a huge swath of boats that were banking on a good outgoing tide bite for chinook just inside the jaws of Tillamook Bay. Off to Three Arch Rocks we went, just off of Oceanside, Oregon.

I’ve had some great success bottom fishing this area before, but that has mostly been in January and February. The effort is rather light down there this time of year, mostly because it has largely been fished out due to its close proximity to Garibaldi, Oregon. Given the success of the summer rockfish fishery however, I was still headed there with high hopes. I knew it might be a challenge however, as my new GPS did not have my historical hotspots mapped out that brought me good success before.

So I was flying blind, something a 21-year veteran fishing guide can usually get away with. I’m not one to pull the wool over my customers eyes, especially to veteran anglers that stand a chance of calling me on my bluff. Nonetheless, I had to start somewhere. Thankfully, there were two other boats also pursuing bottom fish in the area. I rarely let my pride get the best of me, I wasn’t going to fish far from them as they may have good coordinates already plugged into their GPS machines.

So pretending I knew what I was doing, we dropped them down to the 123-foot depth. It wasn’t that long before we were on top of some action. After about 2 1/2 hours of honest effort, our fish box looked surprisingly impressive. Much to even my own surprise, we had a batch of lingcod, kelp greenling, and sea bass that would make anybody proud. Although we did miss out on a little bit of a Chinook bite in the jaws, these guys appreciated a different option, fishing a different piece of real estate along a beautiful piece of the Oregon coast. 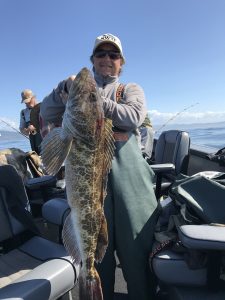 Another reason for my motivation, was the fact that the summer bottom fishing season was so productive, the state Department of Fish and wildlife was forced to close the fishery because the sport fleet was bumping up against their quota for several species. This was going to be my last chance for fresh fish tacos or Panko breaded fish and chips. Guess what I had for dinner?

Of course a closure of this magnitude is a huge hit to the small charter companies that operate along our Oregon working waterfront. A couple of different charter companies had boat troubles, crippling them for a significant part of their peak season. To slap an emergency restriction on their life blood will surely compromise their winter nest egg. Furthermore, the often reliable and hugely popular deep reef option that opens on October 1 is also in jeopardy. Although a decision has not yet been made, managers are taking a hard look at it. This is not the season these charter companies had planned on.

Such is the life of those of us that have come to rely on a natural resource. It’s a risky business. Of course there are those that blame the Oregon Department of Fish and Wildlife for this abrupt closure, but these hard-working fishery managers do their best to maximize effort and benefit, while still charged with recovering these species that were brought to their ventral fins just 20 years ago.

Despite the hurt these charter companies will feel, they understand the need for adhering to these complicated regulations, and know that better times and hopefully better opportunities lie ahead for our fishery-dependent families. These fisheries are governed by the Magnuson Stevens Act, currently under review by the not-so-forward-looking congress now back in session. To see the shenanigans, go here to view how politicians are managing your natural resources. We have capable managers and invested stakeholders working hand in hand to ensure a future for our fisheries. Let’s make sure, as we have in the past, that we continue to do the right thing for the resources that sustain our communities.