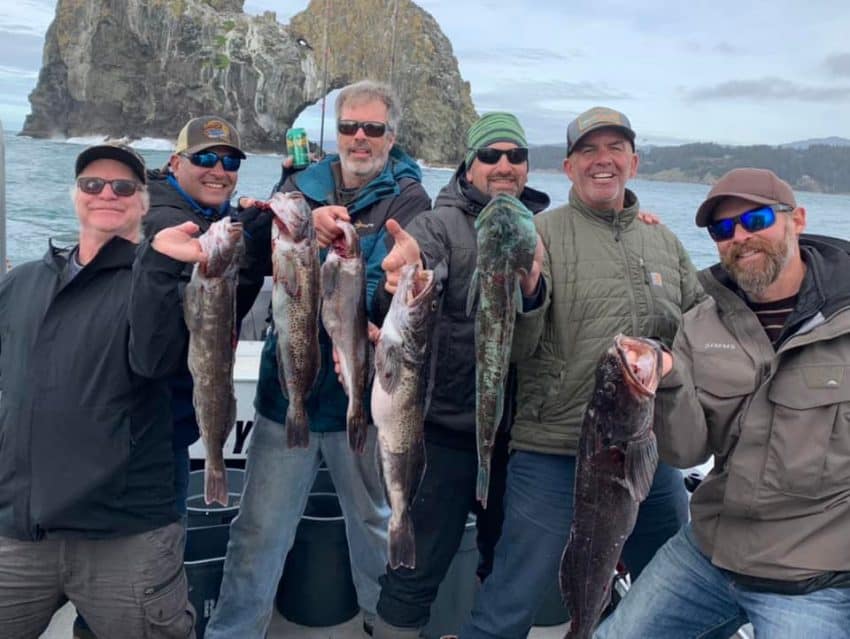 Portland/Metro Fishing Report – Despite favorable water conditions, especially for February, very few spring Chinook have been tallied on the mainstem Willamette. Although still a few months away from peak season, February spring Chinook are certainly a possibility for anglers that put in some time.

Sturgeon fishing should be picking up on the Willamette, but few are in pursuit. Seems that there’s a few Stellar Sea Lions crunching them in the Milwaukie area, please consider doing your part and reporting any mortality or siting’s by going HERE to report what you see.

Clackamas River anglers aren’t yet impressed with this year’s return of winter steelhead. February is often a peak month however, so anglers are likely to see improved catches in the coming weeks.

Avid angler Jeff Stoeger reports, “Hello All. I fished Tuesday and the river was low and noticeably clear and will stay that way until we get some decent rain. There were lots of anglers and boats on the lower river from Dabney to Lewis and Clark Park. There have been some good days on the river from Cedar Creek to Dabney with double digits and there were some particularly good days in Oxbow Park area.

North Coast Fishing Report – Low, clear water conditions continue to plague north coast steelheaders. Fish are present, but mostly concentrated in just a few locations. It’s become a run-and-gun fishery, or race to the hole and pound it until you succeed. Not my favorite kind of fishing.

The Wilson, Nestucca and Siletz remain the best three late-season options for those seeking a consumptive opportunity. Some hatchery broodstock fish are also returning to the North Fork Nehalem for the first time, that too is a viable option if you’re versed in low-water strategies.

The Nehalem remains the best wild fish option for steelheaders into the weekend. With the size of the watershed, it’s in good shape for those willing to work the water dilligently.

Bottomfishing may be a good option this weekend as seas look to be shrinking by Sunday. It’s likely the window of opportunity won’t last long however.

Northeast Oregon will see highs in the mid 40s through the weekend, with nights in the 20s.   Temperatures cool to highs in the 30s next week.  Some snow on Monday, and then clear.

Southeast Oregon will see highs in the 50s and some 60s on the weekend.  Some precipitation on Monday.

Lofton Reservoir:  Likely iced over for the season.

Chewaucan River:  Cold water and starting to ice over for the winter.

Williamson River:  Closed for the season.

Check out Glenn’s detailed report with much more information and forecast in this week’s Member’s version.

Looks to be another great weekend out of Brookings with the “Chetco effect” providing a calm ocean and temperatures in the upper 70’s. Even as you go further North, the bottom fishing from Coos, Charleston and Winchester Bays has been great. Crabbing has also been excellent all over.

A few stealthy (and lucky) anglers have managed to catch a few, and I mean few winter steelhead on the Rogue with most action seen below Agness. The mid and upper Rogue is at a Fall time flow in the low 1200 cfs. Catches have been slow but for those avid anglers willing to work for em have been graced with a fish or two primarily below Hog Creek. The winter run has yet to arrive.

The Chetco is a trickle and still holds a few fish but won’t pick up again until much needed rain comes. Not much pressure except for some die hard bank anglers enjoying a nice day.

The smaller rivers and streams such as the Elk, Sixes, Coos, Millicoma, N. Umpqua and Coquille are way low and clear to make an effort to fish right now.

Surf perch are biting along the rocky jetty’s and sandy beaches too!

Help us build the next generation of anglers and advocates. Enroll yourself or send this info to a friend or family member that wants to learn HOW TO FISH! We’ll take it from here!

With trout, spring Chinook and winter steelhead about to POP, The Guide’s Forecast is poised to teach beginner anglers HOW TO CATCH MORE FISH!

Steelheading is picking up in local tribs, although low water techniques must be used. Walleye has been good in the John Day Pool, slower in Bonneville and The Dalles Pools. Trout fishing is fair.

Vancouver Metro Area
Most tributaries saw an uptick in steelhead catches, even though low water has been the norm. Anglers that size down their lines and offerings are doing the best.

Trout fishing slowed a little this week, but is still fair to good. One phenomenon that has emerged everywhere is a reluctance on the part of the trout to take the old standby, Powerbait. In almost every southwest Washington lake the trout are wanting natural baits.

Walleye and sturgeon are still available in the Gorge pools, although the Bonneville Pool is closed to sturgeon retention.

Lewis and Washougal Rivers Fishing Report—Anglers continue to catch decent numbers of steelhead in the Lewis River, and surprisingly, hatchery fish are still showing up in the catch. The river has dropped to a good level and the fish are spread through the entire system. Boat anglers are finding them all the way up to the Merwin Dam, and bank anglers near the mouth are getting a few by plunking. In between anglers are taking fish on beads or jigs fished below a bobber, and a few fish have fallen to plugs.

The Washougal is slowing down as the run tapers off, and the river is so low and cold right now that many anglers are not fishing it. Anglers had been getting steelhead to take bobber presentations, and drifted baits, but with the river low, and the run petering out, this fishery has not been doing very well lately.

Merwin and Yale Lakes Fishing Report—The water level at Merwin Lake has been lifted, and the Speelyai boat launch is once again usable. Reports indicate the fishing is fair although anglers are reporting the lake still has issues with debris. Even so, John Thompson of  Sportsman’s Warehouse in Vancouver, (360) 604-8000), reports that most anglers are still managing to get their limit of kokanee. The fish are still high in the water column, so anglers are finding the schools in the top 20 feet of water. Flat-line trolling is still working, with most anglers are fishing corn via wedding rings or hootchies, trolled behind a kokanee flasher.

Longview Area
Cowlitz and Kalama Rivers Fishing Report—There were conflicting reports from the upper Cowlitz River this week, with some anglers calling the fishing slow, and Tacoma Power reporting it did not have any fish return to the Cowlitz Salmon Hatchery separator over five days of operations. However, a creel survey on the river found that 37 bank rods kept five steelhead and released one steelhead. 16 boats/52 rods kept 14 steelhead. Most boat anglers are bobber-dogging with beads or small clusters of salmon eggs, while most bank anglers are also fishing bobber presentations. Most anglers are targeting the first few river miles below Blue Creek, but the fish are showing in all sections of the river. Still, the best bite is up near the creek.

The lower Cowlitz gave up a few fish this past week, too, with the creel folks finding 48 bank rods keeping three steelhead. Seven boats/18 rods kept two steelhead and released one steelhead. Bank anglers are mostly plunking, and many boats are also fishing with stationary methods. Some anglers are fishing bobber presentations, but the fish tend to stay on the move in the lower river, and stationary methods have worked best. River conditions were good this past week, with both the Cowlitz and the Toutle flowing fairly clear.
The Kalama River is fishing fair to good, with most of the steelhead holding in the lower river. The stream is running low. The lower flows have been keeping most of the fish from moving upriver. Most boat anglers here are bobber-dogging with bait or beads, although a few folks are pulling plugs, and while some bank anglers are trying hardware, most are fishing bobber presentations. Even with the low flows the steelhead have been in the mood to bite. About the only area where there have not been good reports is the canyon in the upper river.