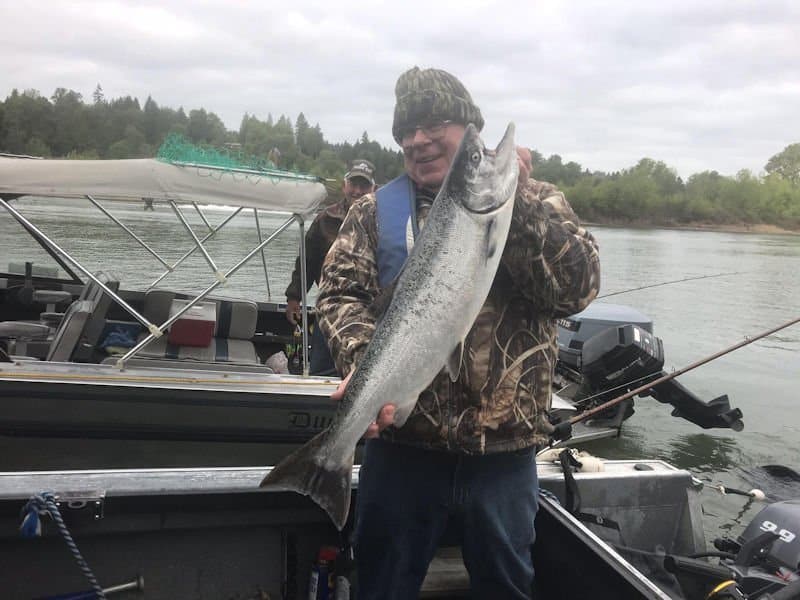 Portland/Metro Fishing Report – Spring Chinook angling is holding up in the lower Willamette River. The Multnomah Channel remains the reach with the highest amount of effort and catch, but Oregon City anglers fared surprisingly well last week as well. Evenings near Willamette Falls can pay dividends this time of year.

Shad fishing is getting really good at Oregon City as well. The sunny forecast will only improve the situation next week.

Sturgeon fishing remains excellent in the lower reaches of the Willamette, but will it hold up for the catch and keep opener in a few weeks? That is the million dollar question.

Columbia River managers are giving mainstem Columbia River salmon anglers another crack at high quality salmon on Saturday. It’s a one-day opener but will re-open again come June 1st through the first week of July. Fishing should be fair for springers with a few summer steelhead starting to show.

The Sandy is starting to produce a few more spring Chinook and an occasional summer steelhead. The Clackamas is a very distant 2nd, despite entering peak season for both species. It continues to disappoint.

North Coast Fishing Report – Sturgeon is all the rage this week, as the sturgeon bite is picking up in the Astoria area as of late. Sturgeon are well distributed throughout the estuary, but as the water warms, the bite is picking up. Sand shrimp and anchovies are working well, it’s just a matter of finding feeding fish.

Call Jason Erickson of Astoria Bait and Tackle before 3:00 p.m. the day before your trip for your sand shrimp and fresh anchovies, should you choose to use them. His phone number is (503) 741-1407.

Spring Chinook continue to challenge anglers in the Tillamook district. Strong tides are favoring upper bay anglers and it will be that way through the weekend as well. Moss often plagues the upper bay on these stronger tides so consider a high tide troll with herring to avoid all that hot mess.

Despite some fair bursts of rain, district rivers remain low and clear, but cloud-cover has inspired more effort.

The ocean remains a bit too rough for comfortable fishing. Lingcod and sea bass will wait for calmer seas, Sunday looks like the best opportunity. Nearshore halibut are happening, but you’ll still have to work for them to find any consistent success.

Ocean crabbing remains good and should for a few more weeks before the summer molt comes on. Razor clam digging in the district remains closed. Too bad given this current minus tide series.

Good trout fishing remains on the north coast, the trout stocking trucks will remain busy for the next several weeks.

Central Oregon Fishing Reports – Glenn ZinkusPOURS on the detail for trout and steelhead from the region. You’ve NEVER seen content like it (We guarantee it!), check out Glenn’s detailed report and forecast in this week’s paid version for Chinook and Steelhead Members both!

Winds across the region will moderate after today and Friday.

Lower Deschutes River:   Salmon flies, and stoneflies in general have been much of the focus and cause of excitement.  Green drakes have been coming off, and there have been PMDs and caddis in the mix.

The Guides Forecast – Middle Deschutes River:   Nymph with Perdigons (brighter ones in orange), Micro Mayflies and Copper Johns when the hatches are not coming off.   Hatches coming off include caddis, pale morning duns, and pale evening duns.

Spinners and spoons remain to be good according to the Sportsman’s Warehouse in Bend.

Upper Deschutes River:   The upper Deschutes is now open.  I’ve always done well nymphing PTs in and around the log jams and pools during the first several weeks within opening.

Haystack Reservoir: The reservoir shows as 100% full and remains a good fishing location.  With the longer days and warmer temperatures, bass and warmwater species will start to get active.  For this early warmwater season, use stripped leeches for fly fishers and crankbaits for conventional gear anglers for bass.

However, I have no recent reports from anglers for this location.

Lake Billy Chinook:  Reports are that kokanee are scattered through the lake, but diligently studying a fish finder and searching by trolling will get anglers to the fish.

Crooked River:   While there are hatches of caddis and PMDs, nymphing is the most effective way to fish the Crooked right now.  Sparkle Pupas, Puparazzi and Micro Mayflies, Zebra midges and Split Case nymphs are taking fish.

MUCH More detail, inlcuding what patterns to use, in the full version of The Guide’s Forecast. Subscribe HERE.

Trout season if fully open in lakes, streams, and rivers. Weather is going to be warm and Memorial Day weekend is coming up… all great prospects for getting some fishing time in along with BBQs with family and friends. Thank you to all who have served and are serving now!

This report might be a little brief than others since I’m heading out Thursday for a 4 night/ 5-day raft trip on the John Day. It’s my first time floating there and is out of my normal realm of the Rogue River in which I don’t usually camp, for I usually have more people instead of gear in my raft!

Reports of a few die-hard Springer fishermen are catching a few… very few. Fat trout are biting at various lakes, warm water in lakes and ponds are bringing on bass, and rock fish and surf perch are still going strong if winds allow to get on the ocean. Enjoy!

From the Guides Mouth:

Grants Pass guide Troy Whitaker of Troy’s Guide Service (541-761-0015) – Springer action at least on the middle Rogue is still slow. Reports of some fish caught at Rainey Falls lately. Flow has been sporadic and therefore throws of any bite that could have happened. Most fish are swimming to spawn up river and are “tight lipped”. Troy recommends using a spawn sac (mesh) to enclose the precious roe to keep the squawfish from bait sucking them off. KILL ALL SQUAWFISH!

He mentioned if one is trying for Springers on the mid to upper Rogue to fish higher up towards Shady Cove to Casey Park. The water is much cooler and closer to their spawning grounds. Mid Rogue best bet is to take the hike to Rainey Falls as fish tend to “stack up”. Troy warns “the hills have eyes” and to report snaggers.

Andy reports that this week was excellent for bottom fishing trips and a few early season halibut were caught too. The Miss Brooke and Nauti-Lady made it to the lighthouse, where there was steady action for lingcod and a great variety of rockfish. Lots of tigers, vermilion, coppers and canaries. A large halibut escaped at the surface after hitting one of the rockfish rigs. Closer to the harbor, the Dash ran a halibut trip, with a keeper and lots of petrale sole and sanddabs, and limits of rockfish on the way in. The Papa B and Bout Time ran up to Arch Rock, where the rockfish action was wide open. The fish are on the surface feasting on crab spawn.

Surf Perch – Red-tail surf perch fishing is still good. When the winds die down, it should puck right up again soon. Andy said that areas along Harris Beach, Lone Ranch and the boarder visitor center beach areas are all great access to fish. Raw shrimp, and Gulp 2” camo sand worms are baits of choice for surf perch. Don’t forget to enter the surf perch derby at Tony’s Crab Shack in Bandon!

The Columbia will reopen for Chinook this Saturday, but fishing was fair at best last weekend. Drano Lake fishery slowing, but still producing. Summer steelhead not coming in well at all, while trout and warmwater fisheries remain strong.

Spring Chinook fishing is slowing everywhere, although Drano Lake catches are still decent. The Columbia is giving up a few Chinook when open, but the sturgeon retention fishery is off to a very slow start.

Summer steelhead are not coming in well at all, with many anglers wondering if the terrible winter run was a preview of what we will see this summer.

Lewis and Washougal Rivers Fishing Report—The Lewis River is fishing very slow, and participation has dropped considerably since the springer season closed. Summer steelhead have been very slow to arrive, leaving little to fish for in the system. Sumer steelhead should be making a decent show about now, and many anglers and others are thinking we may see a repeat of the winter run, when very few fish returned to the river.

The Washougal has lifted a little bit following recent rains, although there have no reports of summer fish coming to hand as of yet. As a result, pressure is very low right now in the lower three river miles, where most of the public access is located.

Merwin and Yale Lakes Fishing Report—Kokanee angling got noticeably better this week, according to the WDFW. The fish seem to be a little bit more predictable than they have been for some time. Fishers are still having to spend a bit of time locating the right depth, and the schools have been staying in the 30 to 50 foot depth. Trolling with divers or downriggers is the way to go, with hootchies and un-dyed corn being the best go-to.

Local Lakes Fishing Report—Battle Ground Lake was stocked on May 19 with over 3,000 catchable rainbows, and the lake has produced one of the best trout bites over this last week. Klineline Pond has been fair for trout. Lacamas Lake is still giving up some trout, as well as good catches of yellow perch and largemouth bass.

Cowlitz and Kalama Rivers Fishing Report—Fishing has slowed considerably in the Cowlitz River, and the fishing pressure has dropped way off. The river is closed to Chinook retention, and the summer run is failing to materialize in any strong fashion. In the latest creel survey above the I-5 Bridge, four bank rods released four Chinook. 2 boats/6 rods released one jack. Below the I-5 bridge, 32 bank rods released one Chinook. 1 boat/4 rods had no catch. During the last week, Tacoma Power employees recovered 299 spring Chinook adults, 123 spring Chinook jacks, one spring Chinook mini-jack, 41 winter-run steelhead adults, and only 17 summer-run steelhead adults during five days of operations at the Cowlitz Salmon Hatchery separator.

Fishing has slowed on the Kalama, although anglers are still finding a few Chinook. The river came up following the recent rains, and that pushed some fish into the upper reaches. Pressure has dropped off a little, but weekends are still crowded. The fish that are biting are falling for salmon eggs or sand shrimp fished beneath a bobber or fished with divers. The fish are now spread throughout the system, but not in very high concentrations.

Local Lakes Fishing Report—Swofford Pond is fishing well for trout, as is Kress and Horseshoe. However, fishing will probably decline with the warmer temps this weekend. Mayfield Lake is fishing very well for trout and tiger Muskies. Largemouth bass are hitting in Carlisle Lake and Silver lake, which also continues to fish well for crappie and yellow perch. The Swift Power Canal was stocked heavily on the 24th, so weekend anglers should find plenty of trout ready to bite there.

Drano Lake Fishing Report—Anglers continue to catch springers in good numbers, although fishing has slowed some. This is still the best springer fishery in southwest Washington, and the Toilet Bowl remains the best place to fish, with trolling prawn spinners the go-to method. Pressure has begun to lessen a little. In this week’s creels two bank rods had no catch. 39 boats/79 rods kept 26 Chinook, 1 jack and released three Chinook.