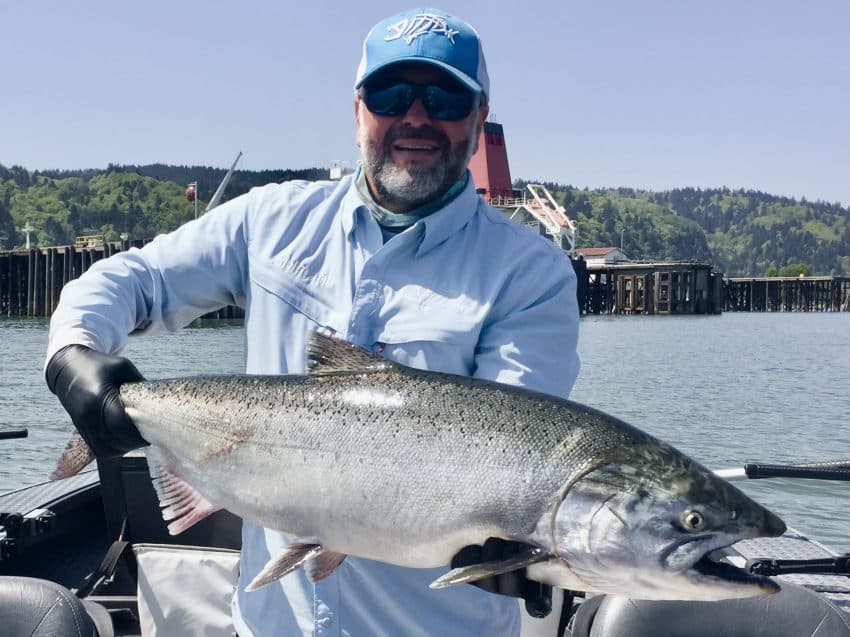 Portland/Metro Fishing Report – As expected, creel data indicates a very productive week last week, with over 1,900 adults tallied, the best catch week since 2015. In a rare show of force, the upper river at Oregon City produced much better catch rates than any other reach of the lower Willamette, a sign that fish are stacking up in preparation for the Willamette Falls ascension, which is already underway.

River temperatures are ideal to keep fish (springers) from moving too fast upstream and the upcoming bump in river levels will keep them from scooting past the falls in rapid fashion, at least for another week.

A river rise is currently underway, which may bode well for Friday anglers before the river jumps more rapidly, and likely puts action on the down for weekend anglers. Turbidity is sure to skyrocket.

Fisherman’s Marine & Outdoor and the Northwest Sportfishing Industry Association invite you to join us for the 28th Annual Spring Fishing Classic taking place on May 21, 2022, at Camp Withycombe, 15300 SE Industrial Way, Clackamas, OR 97015. We are looking forward to having an in-person event, a welcome return to our fantastic fishing derbies of yore. For more information, contact Tiffany at 503.631.8859 or head here.

The Columbia closed abruptly on Tuesday, after explosive catch rates, likely due to an under-predicted return of upper Columbia basin springers, only fueled a good bite in the impoundments upstream of Bonneville. Emergency closures are becoming more common, hopefully a sign of overly cautious management, with the liberty to lift restrictions when an abundance of adults show at Bonneville Dam. The run size is likely to be updated within the next week.

Clackamas River Fishing Report – Creel season on the Clackamas starts this week, just in time for a significant river rise, which will put anglers off from a good effort over the weekend. Most recently, steelhead fishing remained the mainstay for Clackamas River anglers, with a mix of wild winter steelhead, mostly down-running fish, along with a slightly stronger showing of hatchery summer steelhead as those numbers start to grow.

Overall, it’s still slow going for fresh summer steelhead and spring Chinook. Both runs of fish have been depressed in recent years, but anglers are optimistic that this will change in 2022.

The river has remained somewhat high for spring standards, a reflection of snow-melt and a record amount of rainfall we’ve experienced this spring.

MUCH MORE DETAIL IN OUR FULL VERSION. Subscribe HERE.

Avid angler Jeff Stoeger reports, “Hello All. Well, this week we will see a bump in the river going up to almost 12ft due to rain and the freezing level going up. The report I received this week and pictures from fishing buddies is that there is a lot of fish in the upper river near Cedar Creek to Dodge Park. There were some very bright fish as well as some dark down river fish. There was good catches of springers in mid river in Oxbow to Dodge Park area. The river has been ideal in color and water temp has been around 45 degrees but have been on the high side. There has been some real nice native fish returning that have been in mid-teens and nickel bright.”

Detroit Reservoir:   Detroit was stocked this past week with 4,000 trophy trout. Levels continue going up. As of right now, Detroit Lake surface elevation is currently at 1560 feet, so both the main upper and the lower ramps are accessible.   This is near full pool level.  Check the water levels here:  https://waterdata.usgs.gov/or/nwis/uv?site_no=14180500

Josh Pardee reports some great kokanee fishing – with one angler catching a few 15 to 16” kokes, and more in the 12-to-14-inch range.

The middle fork jumped up last weekend and currently at 5930 CFS.  Too high to be fishable.  Water temperatures vary up and down around between 46 to 50 degrees.

It won’t be long before halibut, ocean salmon, bottomfish and crab draw more anglers out to sea in hopes of a wonderful bounty. Let’s make sure we obey the laws and keep each other safe this boating season!

This just in, reader Clifford Rone shared this bit of news for a boater that ignored the Tillamook Bay bar crossing restriction and paid a several thousand dollar fine because of it. CHECK IT OUT HERE!

And we want you to be safe too! That’s why The Guide’s Forecast has produced this fine ocean bar and safety video for your viewing FREE! Check it out and pass it along, let’s pray for a safe and prosperous boating season this year!

There have been spring Chinook reported from the Trask River, where fish are more likely to concentrate, theoretically making them easier to find. Water levels on the Trask have been fluctuating up and down, but have largely remained in good enough condition to allow anglers to successfully score if fish could be located.

May is a good month for numbers of springers building in the Trask River and with all of Tillamook Bay’s “eggs” in the Trask River basket, it’s a good river system to target spring Chinook under good water conditions, which in of itself, can often be low and clear this time of year.

The good river flow is certainly having benefits for the hundreds of thousands of coho and steelhead smolts headed downstream this time of year.

There have also been reports of spring Chinook from Tillamook Bay. Rumor has it, there’s been some troll-caught springers taken from the west channel. Undoubtedly, there’s likely been a few taken at the Memaloose Boat Ramp too, likely on the 2nd half of outgoing tide. There are certainly springers in the bay, if there’s springers in the Trask.

Few anglers are steelhead fishing in the district. It’s still a bit early for even fair summer steelhead catches and any steelhead still in the system, are likely down-runners, headed back to sea after a successful spawning run.

It’ll be a pretty quiet week for north coast anglers, especially with the rain in the forecast and rough seas on the horizon.

The Lower Deschutes is steady – currently right around 3650 CFS in Madras and 5750 CFS at Moody.  Water access is good, with summer-like flows along the Warm Springs stretch.

Temperatures on the lower portions of the river are in the 51 to 53 range at Madras and 54 to 58 degree range near Moody.  These will likely be higher by the weekend.

Some of the first salmon flies are starting to show up in the grasses, but these are still few and far between.

Nymphs are a good way to go with continuing weather variability.

Our friend Josh Pardee reports that the Deschutes is fishing well in and around Bend for browns during April.

Jeff Perin at The Flyfisher’s Place in Sisters forecasts salmon flies this coming week on the Middle Deschutes.

Haystack Reservoir:   ODFW stocked Haystack with several hundred big rainbows (broodstock) in January, and several hundred more went in again during February.   Haystack was stocked with 75 brood stock trout this past week, so there are some big ones there.

Our friend from Central Oregon Fishing Report, Josh Pardee says that Haystack has been fantastic for rainbows.  Haystack is at 98% full today.  Josh reports that the rainbows are moving out of the canals and into the Reservoir.

Kokes, from all the reports, are still deep in depths of 85 to 145 feet.   Effective colors include purple, pink, orange and brass.

As mentioned, there have been some incidental bull trout catches while koke fishing.  Bull trout are also being caught at the same depths – nice sizes in and around 5 to 6 pounds.

Crooked River:   Crooked River fishing has improved through April and these first few days of May. Flows are good, but the water is still a bit dirty.  Josh Pardee estimate the visibility is 4 to 5 feet.

Blue Wing Olive and midges will be the primary surface action, especially during the warmest time of day during the early afternoons.  BWO activity has been especially strong through April. Most of the action will be on nymphing – Perdigons have been the ticket.  Nymphing is consistent and anglers are catching redsides and whitefish.

Check out Glenn’s detailed reports and forecasts right here for Chinook and Steelhead Members both!

While recent rains have been a blessing, they certainly have put a damper on the Spring Chinook, winter steelhead and off shore fishing as of late. Catches of all the above had been good to excellent prior to the beginning of this week and appears to be the same until mid next week. A small window of opportunity maybe on the Rogue Friday and Saturday before forecasted rains bring the flow up drastically.

Blustery conditions over at the coast will keep boats off the ocean this weekend. Maybe for those with enclosed cabins, some sport crabbing and/ or surf perch fishing out of Winchester Bay might be an option.

The Lower Rogue took a dip in action as well this week but should be in prime condition mid to end of next week. Plunkers at Lobster creek and Huntley Park working Brads cut plugs in the higher flow might get lucky.

The mid Rogue is still producing some Winter steelhead, but only hatchery fish can be retained and there’s at least 50% down runner fish. Anglers are starting to change their efforts to Springers which are starting to show up with only a couple “reported” caught near Grants Pass.

The upper Rogue is producing catches of winters and the fly anglers have been having fun with them as well. Only 2 Spring Chinook have been counted at the hatchery so far and should start seeing more by end of next week.

Coastal and inland lakes and ponds have been producing nice trout. On the warmer days, bass and bluegill are biting.

Best bet for this weekend is the lower and upper Rogue for Springers (lower) and steelhead (upper). Flow will be increasing on the lower, so it might be blown out by Sunday making Fri/ Sat “the window”. Lost Creek is still producing some nice trout as well as the coastal lakes that have been stocked and there’s not much pressure. Crabbing and surf perch out of Winchester Bay is also a good option.

1 thought on “Springers Peaking in Willamette”