Do the Numbers Seem Fishy to You?

When fisheries close abruptly, the questions come a lobbin’. Most of my fellow fishermen get rather anxious, questioning whether our fishery managers are accurate in their assessments of the harvest. Although I will claim a bias, since I worked for both state and federal fisheries agencies, I certainly subscribed to the statistical reality, that if you able to sample 20% of the catch, you could effectively get the number of fish harvested for any given fishery. That said, even with my bias, we sure do seem to blow through quota’s rather quickly. It’s especially discerning when the catch rates we personally witness are less than stellar.

The way the numbers crunch, state agencies will get an accurate effort count 2 days during the week, usually by counting boats by airplane, and one day over the weekend. Then, through the port samplers we often encounter at the docks, they will get a catch rate (calculated at CPUE, “Catch Per Unit of Effort” or hours per fish), numerically identifying how many hours it takes to catch a fish. Managers will then extrapolate that catch rate to the number of hours of effort per rod, to attain the catch estimate for the day, and subsequent week. It may seem like fuzzy math from our perspective, but fact-checking will show that a 20% sample rate gives an accurate estimate. I’m pretty sure our fisheries agency captures better than a 20% sample rate too. It’s above my pay grade however; I squeaked by with a C- in Statistics.

Estimates are only as good as the data collected. I’ve had some anglers tell me how they try and cheat the system, I’m not sure how effective that is however. I think it really doesn’t have an impact on overall numbers if the sample size is large enough, but I will often question the morality of such moronically.

With so much at stake, especially for the industry, people can get pretty desperate when they become reliant on a natural resource. It’s understandable, but really unforgivable, as some don’t have a problem robbing from the future.

Fishery managers have a hard job, and I’ve found them very good to work with. Can you imagine how difficult it is to try and predict the return rate of a particular run of salmon? With all the environmental factors to key in, and models to develop, managers have some of the best tools at their disposal and frankly, do a heck of a job for what they have to work with. And picture a fishery without predictions. Sport and commercial fishers would be sidelined from fisheries, no matter how abundant the return rates are. It’s far from an exact science, but a science we desperately need in order to prosecute our fisheries, while maintaining some form of integrity to ensure there are future populations of fish to fish for.

And how about those fish in the ocean? How in the heck do you count fish in the ocean? Especially ones with large home ranges, such as tuna? Again, fishery managers do the best job they can. But how important are these stock assessments?

Most recently both Patrale Sole and Canary Rockfish have been rebuilt to sustainable levels, and well ahead of schedule. With this news, comes a relaxing of extreme measures that were needed just a relatively short while ago, to keep the stock from collapse. Without the initial assessments showing the need for drastic measures to stave off a collapse, we might see these sport and commercially important species of fish never recover, or at least take a lot longer. 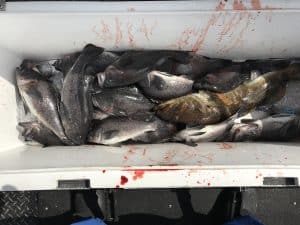 Stock assessments are critical to understand the status of the species. With so many species inter-dependent on each other and natural fluctuations by species, it would be impossible to keep up, especially as agencies are cutting funding. Recent history shows however, how successfully assessed and managed stocks of fish can recover even quicker than previous models have predicted. It’s a step in the right direction and a hard core result of proper fishery management paying dividends back to our coastal communities.

As commercial fishers bring more ingenuity to gear types, and sport anglers embrace the need and value for using decending devices, we’re only going to get better at harvesting the ocean without impact to the population. That’s a good thing as our population grows and an increased amount of pressure falls upon our ocean resources.

And speaking of ocean resources, have you noticed like I have, how expensive seafood is these days? I’m no marketing genius, but I can only speculate, as populations of commercially important species of fish continue to be depleted world-wide, our nation’s fishery resources will only become more valuable on the open market. Sure, this is a good thing for struggling commercial fishermen and our rural economies, but more and more of the general public will get shut out of this protein resource that we west coasters have come to value. We’ll save that for another blog post however…