MSA: Getting its Long Overdue Conversation

You’ve certainly heard me talk long and hard about the Magnuson Stevens Act over the months, but now, even as dysfunctional as Washington DC is, it’s getting some much needed attention at the national level real soon.

There’s a live video feed if you really want to know how the professionals work.

Let’s face it, the vast majority of anglers in our region don’t fish the saltwater. Make no mistake, it’s still a vital part of our coastal and recreational economy, but weather and equipment limitations make this game a rich-man’s sport (thank God for tax write-offs).

That certainly doesn’t mean the vast majority of anglers shouldn’t pay attention to what’s happening during the Alaska field hearings or the hearing in Washington DC when it comes to how our law-makers plan on shaping the future of our fisheries. Just look at the shenanigans on what’s happening with Red Snapper in the Gulf of Mexico. I’ll be writing more about this in the future.

So how does MSA affect us here on the West Coast? Just to put things in perspective, this detailed report on Fishing, Hunting, Wildlife Viewing and Shellfishing in Oregon doesn’t exactly put things into perspective. The report cites (in 2008 economics) that $270 million was expended in freshwater fisheries, while only $71.6 million was expended while in pursuit of saltwater species, not that $71.6 million is anything to shake a stick at. Remember, that’s 2008’s numbers, but more importantly, my point being, many of the freshwater species anglers pursue in Oregon, have spent a significant amount of time in saltwater. That would be salmon, steelhead, sturgeon, herring, anchovies, smelt and even crab. By the way, shellfishing in Oregon was worth $36.2 million in 2008. What’s your favorite estuary to crab in? 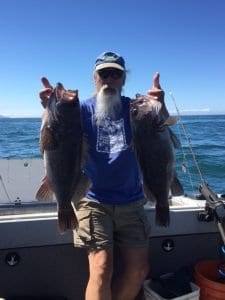 Ted Chu of Nehalem, OR with a pair of dandy black sea bass July ’17

Just like the Federal government, MSA has its reach. It governs all Federal waters out to our Exclusive Economic Zone. That’s 200 nautical miles off of the U.S. mainland. That’s a lot of water to “govern.”

For reasons stated above, it’s important to realize the connection every angler has to the Magnuson Stevens Act. Congress is likely to take up the many different components of MSA over the course of reauthorization. For most provisions in the law, fishermen and conservationists alike are likely to say, “Don’t You Go Changin’.”

But as we’ve seen over the course of time, the progression if industry can often interfere with the progression of legacy. Still fresh coming off of the crash of the early 90’s, you still don’t see many Dad’s teaching their sons and daughters the way of the sea. Most would say the industry is tanking, encouraging their children to go to college, and take up another career. Only some of the most recent successes talking about rebounding Bocaccio Rockfish and Darkblotched Rockfish species, ahead of schedule mind you, can justify our having a different conversation with our younger generation of fishermen.

Here are some of the other components of the Magnuson Stevens Act that affect us “locals.”

These are just a few of the justifications for a strong Magnuson Stevens reauthorization. We’re not exactly sure of the best point of contact when reaching out to Congress about this critical Federal fisheries law, but one thing is for sure, your voice is needed.

When Congress is calling for field hearings, it’s about to get interesting around here. I know August is Congressional recess and all, but why pick the month when we all want to go fishing? Let’s make sure our voices get to the table before any shad hits the fan.