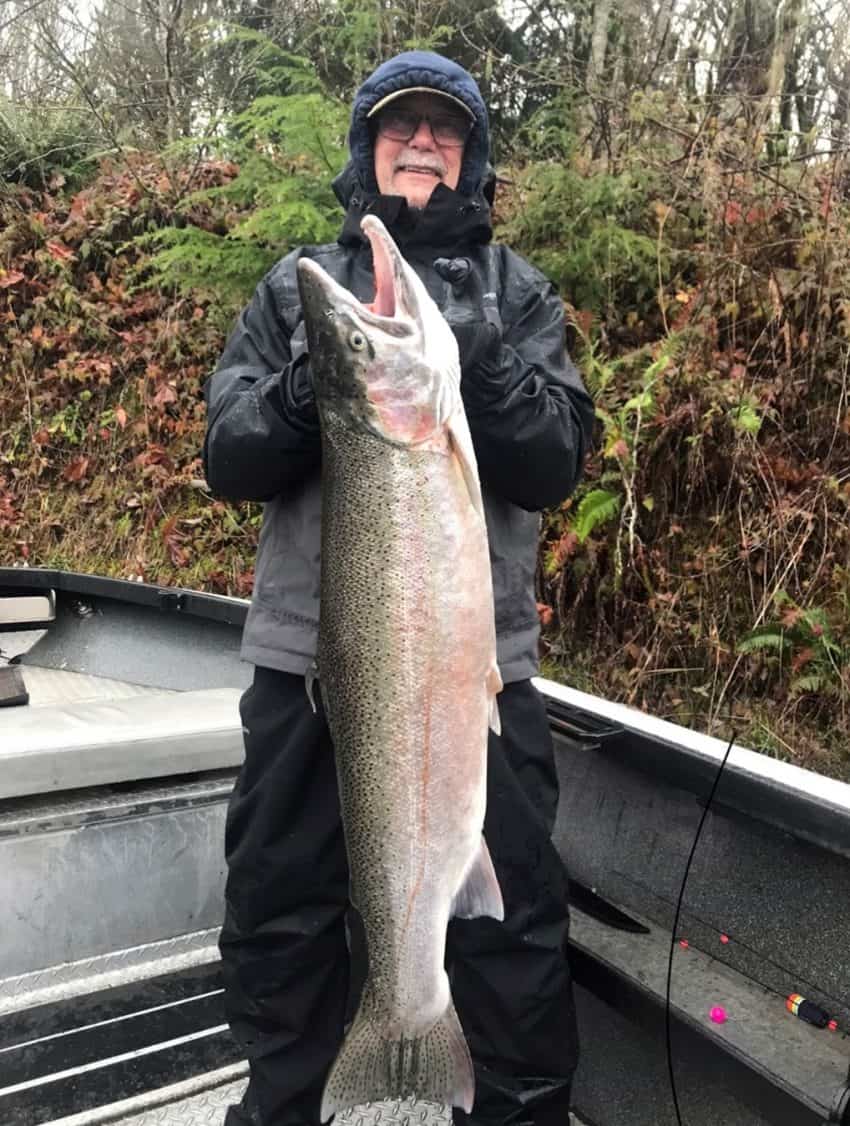 Portland/Metro Oregon Fishing Report – Prior to the current rain event, spring Chinook fishing had been mediocre at best. There were catches river-wide, best in Oregon City last week, but catches picked up in the Multnomah Channel over the weekend. Not spectacular mind you, but improving, indicating that there have been better numbers of fish moving into the system.

The few anglers that have been out in recent days said that yes indeed, the river is full of debris, and water clarity is maybe 1-foot at best.

Find the full report and forecasts for Members on Willamette River right here.

There is nothing going on in the Columbia River right now, but some additional days were given to sturgeon anglers fishing the Bonneville and John Day Pools. See the press release HERE.

WDF&W also approved a very brief smelt dipping season for Cowlitz River anglers. You can see all the details HERE.

Clackamas River anglers have been less than motivated in recent weeks. None-the-less, we’re in peak season for this system and anglers realize that the current high water bump will inspire biters to make their way into the system. Overall, catches have been sporadic, with some reporting brief periods of productive fishing, while most struggled. The current rain freshet will accurately tell the tale of how this year’s return is going to shape up for the rest of the season.

Avid angler Jeff Stoeger reports, “Hello All. I hope that you were able to get out and fish this week. I have a couple of buddies that had a great couple of days on the middle and upper river. One guy went 8 for 13 and another guy went 5 for 8. Most of the fish had some color and a few bright fish in the mix. The water temp is around 40 degrees which is ideal for fish.

A robust trout stocking schedule lies just ahead. Go to the stocking page to see what opportunities lie ahead in the coming weeks.

Anglers are just getting back on the water on Wednesday. With some guides fishing the high water on the Kilchis in hopes of finding good numbers of wild returning adults. I know of two fishing guides that fished the Kilchis on Wednesday, one boat went over two while the other one was two for four.

Anxious observers reported the Wilson was “steelhead green” at Lee’s Camp on Wednesday afternoon. By the time this particular observer got down to milepost 12 however, it was still high and off color. Today (Thursday) will still be high, but fishable. Fresh reports indicate that there are fair numbers of steelhead present.

The Trask also hit an ideal stage on Thursday, but when the water is this high, the upper float from Stones Camp to Upper Peninsula is the better bet. Bank anglers often have fair to good success at the Dam Hole, where fish concentrate in higher numbers before ascending the falls. No report from the Dam Hole for Thursday, the water remained high and off-color, there wasn’t a lot of traffic today.

The Nestucca remained too high to fish on Thursday, but should clear by Friday or certainly Saturday. The Nehalem by next week.

The North Fork Nehalem was in ideal shape on Thursday but the recording indicated there aren’t many hatchery fish this late in the season although the new run of broodstock steelhead should be present and accounted for, which should extend hatchery opportunities for another few weeks. No fish were reported on Thursday morning.

Bottomfishing may become an option early next week.

Lofton Reservoir:  Likely iced over for the season.
Check out Glenn’s detailed report with much more information and forecast in this week’s Member’s version.

Last weekend proved to be very successful for ocean anglers targeting bottom fish and Ling cod. It’s been windy and rough since Monday but chances to get back out for the weekend is looking better further North towards Coos, Charleston and Winchester Bay’s. The crabbing has slowed temporarily due to the influx of fresh water from the rain, but is due to recover shortly.

The Chetco, Elk and Sixes look to be the best bets for the weekend as rain got flows back up enough to boat and bring in fresh fish. Optimum river conditions are forecast along with expected good to excellent catches now through early next week. It’s gonna be very busy so be prepared…… be nice!😊

The Rogue river flow also got some help from recent rain, but has not yet inspired “good” or better steelhead catches. The river is dropping back down and has warmed to just under 50 degrees. Steelhead catches from Grave creek up to Gold Hill this week show that there are fish throughout the system….. you just have to work a bit to find em. With that in mind, river conditions dropping and warmer, this weekend’s forecast is as good as it’s gets for now! I’m anticipating some better reports for next week.

As we’ve gotten some nice “Spring” weather, I’d be lacking to not mention some of the lake and pond opportunity. Some lakes and ponds have already received some trout stockings- Central Point’s Expo Pond and Reinhardt Park Pond in Grants Pass, Lake Selmac in Selma. As the weather and water warms, bass and bluegill make for fun family outings for the kids to catch. Lost creek and Galesville lake, although low, are fishable for holdover trout.

The Millicoma, Coos and Coquille systems are also back into “steelhead” shape and should provide this week with some good action.

The little bit of recent rain so far hasn’t done much to spur on a decent bite….”but fish are here, ya just have to work harder for em” Troy reported. If you’re boating, you gotta cover some water and don’t take too much time in any one place and make sure your offering is away from the boat. Bank anglers should work their favorite holes and try a number of things, but don’t stay too long before moving to the next hole if there is no success. Using smaller baits like dime sized roe, 1/4-1/2 nightcrawler, size 10-12 soft beads and no bigger than 3.0 Mag lip plug Troy recommended.

The recent atmospheric river from the Pacific Ocean was not kind to SW Washington steelhead streams. All the rivers are blown out and most will take some time to mend. Trout fishing is still fair at best at most lakes.

The Bonneville Pool will reopen for sturgeon retention on March 9 and 16, and retention remains open in the John Day and The Dalles Pools. Spring Chinook is now open in the Cowlitz.

Walleye fishing is very good in the John Day Pool, and fair to good in The Dalles Pool.
Lewis and Washougal rivers Fishing Report—A few steelhead were caught in the Lewis River this past week, according to reports heard by John Thompson at Sportsman’s Warehouse in Vancouver, (360) 604-8000. No one would call it hot fishing, but apparently there are still some wild steelhead making their way up the river. Most boat anglers are fishing from the hatchery down to the golf course, and mostly using bobber presentations. A few are pulling plugs. The river was in good condition before the heavy rains set in, but the river is rising and is high enough now that it is dangerous to boat. Bank access is also limited right now, with the river running well into the shoreline cover. Few anglers have been fishing recently.

The Washougal hatchery steelhead run is over, although a few wild fish may still be in the system. Few anglers have been out, and the river has been prohibitively low for weeks. The recent deluge raised the river just up to the action stage, and it is in poor conditions.

Merwin and Yale Lakes Fishing Report – Both lakes were rated fair to good before the heavy rains came, and most anglers were still doing well, according to Thompson. Recent patterns continue to prevail, with the schools of kokanee holding in the top 15 to 20 feet of the water column. Flat-line trolling or using very light lead has been the best way to go. The fish are biting on most usual kokanee rigs, wedding rings or hootchies, tipped with natural corn, and trolled behind kokanee dodgers. Remember there are bull trout in Yale Lake, and they may not be kept.

Longview Area
Cowlitz and Kalama Rivers Fishing Report—Dave Mallahan of Dave’s Guide Service (360-201-9313), reports that the fishing had, once again, picked up before the heavy rains trashed the river. He said it was not hot fishing, but most guides were boating 2 to 4 steelhead per day. In the latest creel above the I-5 Bridge, 31 bank rods kept three steelhead. 20 boats/71 rods kept 30 steelhead. Unfortunately, Mallahan said the river is now running very muddy, and is likely to stay that way for a while.

Boat anglers are getting most of their fish by bobber-dogging with bait or beads, and bank anglers are mostly fishing bobber presentations, although a few are drifting. Most of the action has come in the first few miles below Blue Creek.

Mallahan did say fishing pressure is very high this year, and he has seen that many guides that usually fish the coastal streams have moved over to the Cowlitz, since all the coastal rivers are now closed to all game fish.

The lower Cowlitz was also giving up some nice steelhead this past week. In the latest creel, 180 bank rods kept 18 steelhead and released nine steelhead. Most anglers are plunking with spin-n-glos and bait.

The Kalama River has had a few slow days, but it continues to give up some steelhead from the mouth up into the canyon. Anglers are scoring with a number of methods. Boat anglers are bobber-dogging with beads or bait, or fishing jigs below a bobber. Pulling plugs is also taking a few fish. Bank anglers are fishing beads, bait, or jigs below a bobber. Some are drifting or throwing hardware. The river was low and cold before the rains developed.