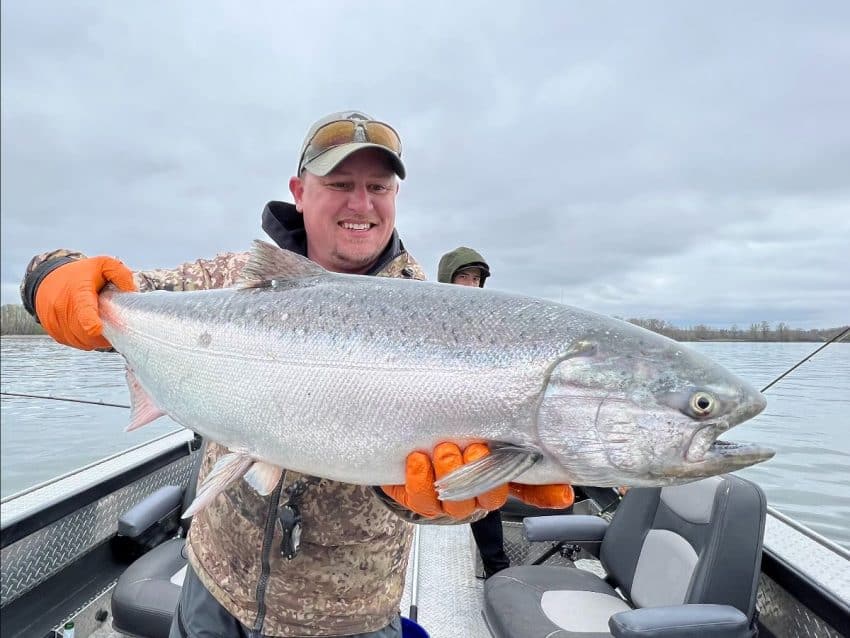 Portland/Metro Fishing Report – The Columbia River fishery is now CLOSED. The fishing was getting pretty good too! It’s another sad ending to what could be a banner year for sportfishing on the mainstem Columbia.

Want to put an end to abrupt closures? Will you support Snake River salmon recovery?

Make your voices heard by signing the recovery petition HERE

Willamette River anglers saw another good week of catching, with good action from the Multnomah Channel and Oregon City. The egg bite is on for Oregon City fishers with anglers welcoming the recent weather change to mix things up here. There’s a whole bunch more fish to come in the next several weeks, we’re entering peak season here so things are looking up. With the Columbia River closure, look for the Willamette to become much more crowded in the coming weeks. The Multnomah Channel will handle a bunch of the pressure, but catches and effort should swell from Oregon City to St. Helens.

Sturgeon catches on the Willamette are good too, with smelt a key bait to your success.

Trout and kokanee will become all the rage for metro anglers the next few weeks although a cold weather front will certainly quell a lot of motivation until the real spring arrives soon after.

Trout stocking schedules are likely to remain robust, this is the time for these low-level lakes and ponds to shine!

North Coast Fishing Report – With a looming Columbia River closure and a Willamette River spring Chinook fishery starting to blossom, interest in winter steelhead has faded. Certainly mediocre-at-best fishing had something to do with it too.

There are still winter steelhead around, but few and far between. Even after a nice rise in river levels, guides and anglers struggled for consistent success. It won’t be a steelhead season to remember so to speak, but coastal effort will focus on bottomfish for the next several weeks as we transition and wait for spring Chinook to appear, along with ocean coho opportunities.

Until then, it’ll be a bit of a snooze city for north coast anglers, especially with more weather about to settle in on top of us for a while.

Bottomfishing and crabbing was excellent for pro guide Rob Gerlitz (503-812-4950) on Thursday (4/7). Limits of bottomfish and lingcod as well as crab for the captain!

Lower pressure systems arrive on Friday, and some moisture pushes into the Cascades.  Heaviest snow on Monday.   Central Oregon may even see a few showers beginning Saturday night and into Monday morning.

The Lower Deschutes is steady – currently right around 5240 CFS at Moody and forecasted to remain steady into next week.

Temperatures on the lower portions of the river are in the 48 to 53 degree range.

Jeff Perin at The Flyfishers Place suggest wade fishing is good near the dam or launch a boat or pontoon and fish drop-offs.    Black, red and olive chironomids are great right now, as well as black, olive and maroon leech patterns.

Kokes, from all the reports, are still deep in depths of 85 to 145 feet.   Effective colors include purple, pink, orange and brass.

Crooked River:   Flows remain low and steady.  Water has been dirty.  Jeff Perin at The Flyfisher’s Place in Sisters that with the low flows, many of the fish migrated down river from Prineville to approximately MP14.

Blue Wing Olive and midges will be the primary surface action, especially during the warmest time of day during the early afternoons.  Most of the action will be on nymphing – Perdigons have been the ticket.  Nymphing is consistent and anglers are catching redsides and whitefish.Check out Glenn’s detailed reports and forecasts right here for Chinook and Steelhead Members both!

The Rogue and Umpqua remain open for steelhead, but are closed to trout angling. Steelhead catches on the mid to upper Rogue are producing sporadic catches of newer winter fish along with down runner summer fish.

The Umpqua system is still seeing some good steelhead catches and a few springers have been caught. Stripped bass angling has gotten increased attention lately.

Lakes and ponds have been getting regularly stocked with trout and is a great time to take the family out to have some fairly easy catches and fun.

Up towards the upper Southern coastal area, Charleston and Winchester bays are getting a good bite of bottom fish and surf perch as well as great crabbing. Winchester Bay Charters (Cole-541-285-7838) is now offering Striped bass trips!

Best bet for this weekend is the mid and upper Rogue for steelhead. Recent rain got the river up 1000+ to over 2500 cfs earlier and should have pushed more winter steelhead throughout.

I’m finally getting to go on a much needed vacation starting next Wednesday and will miss writing this edition of TGF for two weeks in a row. I don’t expect too much to change except for some Spring Chinook catches to increase in the Umpqua and Rogue systems. Winter steelhead on the Rogue should continue to be decent through May at least. Spring trout fishing on many lakes should be good as regular stocking has started. Weather permitting, ocean bottom fishing should remain excellent. See ya back on the 29th!

Springer Fishing is closed on the mainstem Columbia, but springers are now entering the tributaries. Late runs of steelhead are peaking right now, with very good fishing in the Cowlitz. Walleye is excellent in the Gorge.

The mainstem Columbia is scheduled to close today, since the states did not act to keep it open. Fishing did pick up, but it never got hot. Anglers are still finding some late steelhead in the tribs, and a few Chinook have been taken in most of them, but those waters are just getting going for springers.

Trout fishing is pretty good in most waters, and some have received their first spring plantings. Some lakes are beginning to give up warmwater fish. Watch for fresh trout plantings, as well as big brood stock trout and steelhead plantings HERE

Lewis and Washougal Rivers Fishing Report—The Lewis is still slow for spring Chinook, with just a few reports of catches. There have been some taken by anglers trolling herring at the mouth, and there are plunkers working the lower river. As of yet only a few are showing up in the Lewis proper. Fishing pressure has not been really heavy yet, with a few anglers fishing in the Woodland area, and up by the hatchery.

Most fishermen are back-bouncing salmon eggs, or back trolling with eggs in the middle and lower sections, and a few anglers are now targeting the Meat Hole at the hatchery by hover fishing. Bank anglers at the hatchery are mostly throwing bobber and salmon eggs, or egg and sand shrimp combos.
The Washougal is now closed to steelhead until April 16, and the river does not get any kind of meaningful spring Chinook run.

Merwin and Yale Lakes Fishing Report—Fishing for kokanee has been fair to good this past week, and the fishing pressure has increased. Unfortunately, the weather is not expected to be compatible to good fishing this weekend, with snow forecast for both days. The schools of kokanee have not yet moved deeper yet, so flat-line trolling, or using minimal lead has been the best way to get them. Trolling wedding rings or hootchies tipped with corn has been the go-to, but mix it up if the bite is slow. If the weather is foul this weekend, it should at least keep the crowds to a minimum.

In the latest creel survey from above the I-5 Bridge, 88 bank rods kept 22 steelhead. 6 boats/19 rods kept 18 steelhead. Most boats are bobber-dogging with beads or small clusters of salmon eggs in the first few miles below Blue Creek, while bank anglers are scoring by drifting or with bobber presentations near the mouth of the creek. There have been a few spring Chinook caught by anglers fishing for steelhead, but still no reports of catches at the Barrier Dam.

The Kalama is fishing fair for steelhead, and a few springers have been taken in the lower river and at the mouth. The steelhead are being taken by boat anglers fishing the middle sections of the river with a variety of methods, including pulling plugs, and bobber-dogging. Also, bobber and bait or jigs have been getting fish. Steelhead have been active in the upper reaches within the canyon, too.

Close to a thousand spring Chinook have crossed over Bonneville Dam, but creel surveys did not find any springers in the catch at Drano Lake, the Wind River, and the Klickitat River as of yet. That should change soon, but the fishing generally picks up a lot in late April. Most anglers at Drano will be fishing prawn spinners or Super Baits and trolling Super Baits or Spinfish should be the ticket for anglers fishing the mouth of the Wind. Lower river anglers fishing the Klickitat should begin to find a few springers soon, too.

SW Washington Members have access to the Columbia River reports as well.  Find them here.