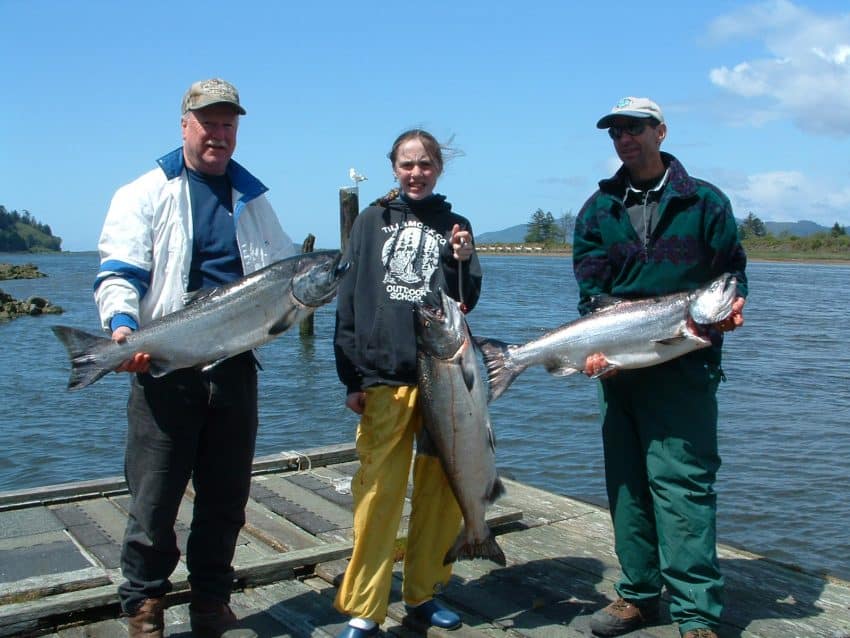 Portland/Metro Fishing Report – Willamette River spring Chinook success took a dive this week. Tried and true guides working this fishery are packing it up, in hopes of finding greener pastures somewhere else. Sure, there’s still plenty of salmon yet to return and a June – early July fishery is still likely to produce, it’s just likely to get a bit more challenging in the weeks ahead.

Shad are hitting in force in the Oregon City reach, it’s best when the sun is shining and in the early morning as well.

Columbia River anglers are finding good opportunity and mediocre success. Bonneville, particularly on the Washington side of the river, is best, but boaters and Oregon bank anglers are scoring fair results as well. Anglers fishing downstream of the Columbia River Gorge are not finding consistent success. Summer steelhead are rare.

Trout continue to get stocked with some vigor in all areas of the state. Check out the stocking schedule HERE. Henry Hagg Lake got a good stocking recently and boaters did well there this week. Full details on the Willamette River section of our full version.

North Coast Fishing Report – Spring Chinook remain largely elusive in Tillamook County but fish are being caught nearly every day. The upper bay fished best on the strong tide series early this week, but tides are diminishing so the lower bay will become the target this weekend. Of course the ocean is an option as well with the best weather coming Friday and Saturday, but always volatile this time of year so check the latest offshore weather forecast before venturing out.

Bottomfishing has been a bit spottier lately, but persistent anglers are still finding plenty to brag about. Some nice lingcod continue to hit the deck despite the all-depth option off the table for the next several months.

Ocean crabbing has tapered off on much of the north coast. Bay crabbing in Tillamook remains good and tides are favorable for a bountiful harvest.

Rivers and streams are open to trout fishing and cutthroat should be numerous. Check local regulations carefully before venturing out.

LAST CHANCE! Win a $25 Gift Certificate to the TGF Store!
We’ve created a truly brief survey to help us identify opportunities to
improve and expand our current service, delivering you more value!

Thanks to all of you that have already contributed!
If you have not, please take the one-minute survey and get a chance to win that gift certificate.

Weather Outlook Across Central and Eastern Oregon:
The hot weather comes to an end, with a cooler than usual weekend before warming to seasonal temperatures midweek. The current temperatures in the 80s throughout much of the region will cool to the high 60s/70 on the weekend and into early next week. There will also be some windy days in the high desert, the Gorge, and Eastern Oregon on Friday, and through the weekend in some locations such as the Gorge.

Lower Deschutes River: Except for a report from a friend who floated downstream from Warm Springs, the salmon fly action is waning. Redsides have been bombarded for the past month, and easily accessible sections have been hit hard. That said, a friend did well on dry stoneflies during the afternoon. There was also a lot of later caddis activity and PMD activity through the day.

Upper Deschutes River: The upper Deschutes is now open. I’ve always done well nymphing PTs in and around the log jams and pools during the first several weeks within opening.

Haystack Reservoir: The reservoir shows as 100% full and remains a good fishing location. With the longer days and warmer temperatures, bass and warmwater species will start to get active.

Lake Billy Chinook: Reports are that kokanee are scattered through the lake, but diligently studying a fish finder and searching by trolling will get anglers to the fish.

Crooked River: I am hearing of some good caddis activity on the Crooked. When the afternoon hatches are not coming off, use Sparkle Pupas, Puparazzi and Micro Mayflies, Zebra midges and Split Case nymphs.

Lofton Reservoir: I’ve fished Lofton in the past, and heard stories dating back 40 and 50 years of some of the trout taken from Lofton. Lofton was stocked this week with 700 legal and 300 trophy trout and is scheduled to be stocked again next week with the same mix of trout.

Chewaucan River: The Chewaucan is fishing better now for trout with nymphs and lures right now. Fishing is good right now. Anglers with intentions to fish the Chewaucan should do so over the next several weeks, as the water will be low and will warm as summer approaches.

Free Fishing Weekend June 5-6 is a great time to introduce friends or family members to your favorite fishing adventures – no license, tag or validation needed to fish anywhere in Oregon.

This week’s weather has been in the 100’s here in the Rogue Valley. Recent increased flow out of Lost Creek Dam has provided Rogue River flow to just under 3000 cfs and keeping temps under 60 degrees to help aid what Spring Chinook there are, to make it up to the hatchery spawning grounds. With the few anglers who get up early, most fishing pressure has been in the upper river above Shady Cove where some catches have taken place… not good by any means, but sporadic at best.

Most people are in the river and not fishing it! My personal best bet for upcoming fishing opportunity is to head to the lakes and ponds, or even to the coast for some excellent bottom and perch fishing. It is FREE FISHING WEEKEND!

Riley also have been hitting the lakes more so lately since the Springer action has been slow. He got some nice kokanee and browns Memorial weekend over at Paulina Lake. He suggests Lost Creek, Applegate, or Selmac best bets for trout and bass fishing. If wanting to try your luck for Springers you better go early and up around Shady Cove.

Fishing in the local tributaries is very slow, with spring Chinook catches declining, and very few summer steelhead coming in. The Columbia offers better ops for Chinook, steelhead, and shad, with the best action coming up near Bonneville Dam and the Camas area. Sturgeon are biting a little better, too.

Local lakes trout fishing is wrapping up, while high elevation lakes are now accessible, and offer better chances for success. Warm water fishing is excellent anywhere there are fish, including the many lakes along Highway 14 in the Gorge.

It looks like another great year for shad, with catches picking up throughout the Columbia.

Next weekend is free fishing weekend in Washington, and anglers can fish Washington waters without having to purchase a fishing license on June 12 and 13. However, all other rules and regulations apply

Lewis and Washougal Rivers Fishing Report—Not much to report in the Lewis, as fishing participation is really declining due to a lack of fish.  Only one bank angler was surveyed in the last creel survey, and he had no catch. River conditions have been good, but with Chinook closed and the steelhead a no-show so far, anglers have little to target in the river.

The Washougal has recovered from its low water issues after the recent heavy rains, but is once again on the drop. Here, as in the Lewis, there have been no good reports.

Merwin and Yale Lakes Fishing Report—kokanee anglers are finding conditions to be a bit more stable in both lakes, although the high sun has pushed them deeper, according to John Thompson of Sportsman’s Warehouse in Vancouver, (360) 604-8000). Most anglers are using divers or downriggers to reach the fish in 40 to 60 feet of water, and fishing hootchies or other lures tipped with corn fished behind a dodger or flasher.

Cowlitz and Kalama Rivers Fishing Report—Steelheading in the Cowlitz is still slow, although a few summer steelhead are biting. Fishing pressure has dropped quite a bit, too. During the latest creel surveys above the I-5 Bridge, seven bank rods had no catch, while five boats/17 rods kept two steelhead and released one steelhead. Last week, Tacoma Power employees recovered 110 spring Chinook adults, 64 spring Chinook jacks, 10 summer-run steelhead adults, and six winter-run steelhead adults during five days of operations at the Cowlitz Salmon Hatchery separator.

Upper river anglers are bobber-dogging with bait for the fish, while bank anglers are using a variety of methods.

Lower river anglers are finding a few fish, but not many. In fact, creel surveys below the I-5 Bridge found 23 bank rods with no catch, and one boat/one rod had no catch.

Fishing has slowed for spring Chinook on the Kalama, although river conditions are improving following the rains. Thompson of Sportsman’s Warehouse has heard reports of a few summer steelhead being caught in the river. Both the steelhead and Chinook seem to be spread through the river, with some of the best bites coming from the mid-river drifts.

Local Lakes Fishing Report—Mayfield Lake rainbows are biting well, as are the lake’s tiger muskies. Mineral Lake is also fishing very well for rainbows. Swofford Pond and Silver Lake are both good for largemouth bass, and Silver is still giving up nice crappie.

Drano Lake and Wind River Fishing Report—Fishing has slowed down in Drano Lake, and the pressure has lifted a little. During the latest creel survey, four bank rods had no catch, while 18 boats/29 rods kept three Chinook and released two Chinook.

The Wind River is giving up a few spring Chinook as well, with the latest creel survey showing that seven bank rods had no catch, while 10 boats/18 rods kept three Chinook and released one Chinook.

Local Lakes Fishing Report—Goose Lake has been well-stocked with rainbows and cutthroats and has produced excellent fishing. Rowland Lake is still fishing well for trout, and there are bluegill and largemouth biting as well.

Terry Otto’s story about Columbia Gorge walleye in the Columbian Newspaper can be found HERE.