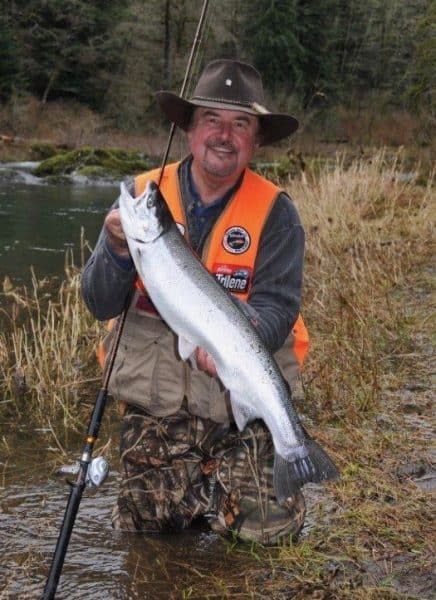 Back-Trolling plugs from a boat is a fishing method late-season steelhead, especially big-boy males, respond to by violently striking what they consider to be invaders to their territory. For example, two of the three largest steelhead I’ve caught, including a 30 pound, 5 ounce monster, fell for a plug backtrolled into their space.

Given the popularity of winter steelhead fishing, it’s seldom to find your favorite river void of other boaters trying their luck on the very same stretch of water as you. Given the broad use of fishing methods like Bobber Doggin and Side Drifting, it’s a good bet that most or perhaps all other anglers are drifting baits via these techniques. By backtrolling plugs you might convince fish, even a monster male, to give your intrusive plug offering(s) a shot rather than turning their nose up at yet another look-alike egg imitation drifting by.

It’s more than a few times that I’ve found fish willing to hit plugs after ignoring what others have previously shown them.

In case you’re not familiar with the method of backtrolling plugs or need a refresher, here’s how to do it along with a few tips that might up your odds of success.

By rowing, or with the aid of a trolling motor, hold your boat steady in the river current upstream from an area you believe is holding fish. It’s then that you free-spool your diving plug out in the current behind your boat 40 to 50 feet before engaging your reel. It’s the current passing your boat that will cause your plug(s) to begin working. Since steelhead hit plugs with a vengeance, you will want to hang on to your rod tightly, or utilize a rod holder as you see fit.

With your plugs wiggling and diving near bottom, you then need to slowly allow your craft to slip downstream. If you are new to backtrolling, keep in mind that backing downriver too fast might not produce as well as doing so slowly. Given experience, you may learn to cover some areas a little faster than others but when reaching spots where you have caught fish or seen them caught, it’s important to stop the boat. Holding your boat steady in the current and allowing your plugs to wiggle and dive can produce explosive strikes.

And although the average plug distance from your boat should be 40 to 50 feet, you might try a shorter distance, of say 30 feet, when backtrolling short runs where there is just not room to get the boat stopped and plugs out the full distance before reaching the end of the hole. Likewise, to facilitate a deeper dive or when fish might be spooked due to clear water and/or heavy-fishing pressure, a 60 to-90 foot let out might provide you with an advantage.

Some consider plug pulling a mindless fishing method but believe me when I say, doing this effectively is harder than you might think, at least for the boat operator, and will absolutely make you a better oarsman or trolling motor operator. After all, at least with a drift boat that includes all your gear and friends, your job will be to maneuver a 1,200 pound boat in a way that positions a quarter ounce plug(s) where you want it.

What friends and I often do is take turns rowing, where it’s your turn to row after landing a fish.

Keep in mind, this fishing method works best when river levels are medium to low in height, meaning the color of the river should range from steelhead green (3-4’ visibility) to gin clear.

An important element when Back-Trolling plugs for steelhead is to run all your lures the same distance from your boat which, as the theory goes: will intimidate territorial fish to strike. Keep in mind, however, that if the water is clear as gin, smaller plug sizes might produce better than big ones -as large plugs can exhibit too much intimidation.

With a bait-cast reel, you can determine distance out by counting the number of passes of the level-wind line-guide across the face of your reel. For example, an Abu Garcia 5500 reel will pay out seven feet of line with each pass of the line-guide – so seven single passes of the line-guide will be the right amount of let out for most situations. While you can count line-guide passes to determine distance, the easiest and most accurate way of gauging distance is to use reels equipped with line counters.

And while there are a number of excellent line counter reels available on the market what I’ve recently employed are the all-new low-profile, digital line counter reels offered by Abu Garcia. This new reel is called a Max DLC and comes in two sizes – a steelhead and salmon size. In my opinion, it’s the only low profile line counter that’s slim enough to use for casting or trolling. In addition, the screen will not fog and it includes a light.

What surprises many anglers is how many fish don’t get hooked given how ferociously steelhead strike plugs. There are several things you can do to up your strike-to-land ratio. First It’s important to wait until the rod tip bottoms out before setting the hook and to have your thumb firmly planted on the reel spool when doing so. It’s only after the hook set that you take your thumb off the reel spool and let the drag work. You don’t want to set with a quick snap, but rather pull the hooks into the fish with a strong yet firm upward motion.

While it’s not mandatory, many guides and anglers that focus on this fishing method employ magnum taper rods, that is: rods having a heavy butt section that will yield strong hook sets, combined with a light enough tip so you can clearly see the plug work. You should also realize that a rod having a light tip will allow the plug to wiggle and vibrate more violently than a rod having a stiff tip.

Another factor worth thinking about is rod angle and how far you let the rod tip dip before coming up tight when fish strikes. Limiting how far the rod can bend by bracing the mid section against the drift boat gunnel goes a long way in ensuring the hook points get initially started, and the reason I don’t have rod holders mounted in the front of my drift boat. This forces my friends to catch more fish. What I do is have my passenger friends hold their rods with the reels positioned in their lap with their thumb on the reel spool. Holding the rods steady and braced against the gunnel makes it a lot easier for the person rowing to see the rod tip and know the plug(s) are working properly. Sure, I sometimes pull hard on the oars to help set the hook and you should too. Doing these things while backtrolling can make a big difference in improving your hook-to-land ratio when fishing plugs.