It hasn’t been all that long since anglers starting learning how abundant stocks of forage fish play a role in the success of our most pursued species of salmon, steelhead, albacore and other sport important species. We still have a steep learning curve to conquer.

Not many sportanglers can deny how many times they’ve zipped open the belly of the fish they just caught, to see what they’ve been feeding on, in an effort to match the hatch and catch even more for their seemingly bottomless creel. When the bite’s on, we want to take advantage of it.

A recent paper referenced scientific evidence that fluctuations of forage fish stocks have a long history of ups and downs, well before humans starting removing these tiny fish for commercial and sport purposes. In one sense, it’s a relief that we’re not the only factor effecting these sensitive populations of fish that feed our fisheries, but given human history on how we interact with our ecosystems, no one in their right mind would say we can just go about our “business as usual” with so much at stake.

There has been some great strides in protecting unmanaged forage fish species for which we should applaud the Pacific Fisheries Management Council. There remains some outdated management practices that we need to dig in and understand just how outdated they are.

In mid-February, there’s often a unique event that takes place in state waters, Yaquina Bay in particular. Sometimes large, sometimes small schools of herring spawn along the rocky shorelines and saltwater vegetation habitats in the small mid-Oregon coastal estuary. I’ve gone down to Yaquina and sport harvested my own herring for salmon trolling and halibut fishing. It’s a pretty unique opportunity to harvest these beautiful and critically important forage fish. Great fun for kids too! You’ll see the crowds, especially since the recent uptick in numbers spawning in Yaquina Bay.
What you might not recognize, mostly due to the fact that the spawning population of Yaquina Bay herring hasn’t been so plentiful in recent years, is a seine net fishery that’s being prosecuted on that spawning population of herring right now. With growing numbers, comes growing interest.

As you’ll see from the table below, ironically, when coho populations were plummeting in the late 80’s and early 90’s, herring populations were blossoming (keep in mind that this is just about 38 years of data, who knows what the historical population was. Regardless, the numbers we’re seeing now, are still a fraction of what we saw in the boom years. Should we still embrace management strategies that we had nearly 40 years ago? I can’t say that I’m that qualified to answer that question, but common sense, and those watching recent trends in fisheries world-wide, maybe not.

I think the shocker is this, as it stands now, the seine fleet is authorized to harvest 20% of the spawning population of herring in Yaquina Bay. I guess it’s worth asking how many spawning salmon adults sportanglers harvest in a good fishery; I’ve been told under good catching conditions, we have the capability of harvesting up to 30% of the spawning population. On good return years, we just assume that if we take a good share of “excess” salmon off the top, there will still be ample numbers of spawning adults to perpetuate the next generation of returning adults.

As if we don’t have enough on our plate in recovering wild salmon populations as it stands, do we have to start looking at forage fish management for the future security of our fisheries. I’m thinking we do. We’ll keep our eye on this issue, and other critical factors that affect the health of our saltwater fisheries in the all-encompassing federal fisheries law, the Magnuson Stevens Act. Stay tuned, we’ve spent so much time focusing on freshwater habitats (and justifiably so), let’s not overlook the environment that houses not only the adolescent through adult life cycle stage of our wild salmon, but the entire life-cycle of the organisms that feed those very fish, and many more that the recreational and commercial fleets have come to rely on.

Table 1. Estimated spawning biomass from egg deposition surveys, fishery quota, and landing data for Yaquina Bay commercial herring fishery, 1979-2016. Landing data includes all landings made in Newport during the roe herring season (January 1 – April 15) and is not displayed for years in which fewer than three vessels are represented to protect confidentiality (indicated by asterisks, ***). 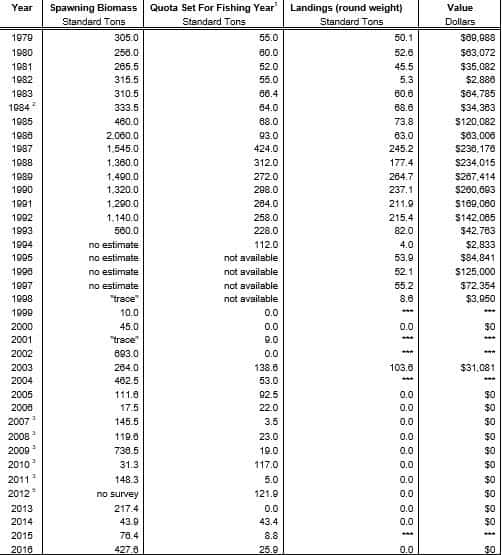 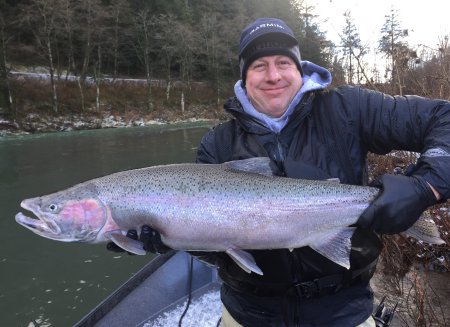