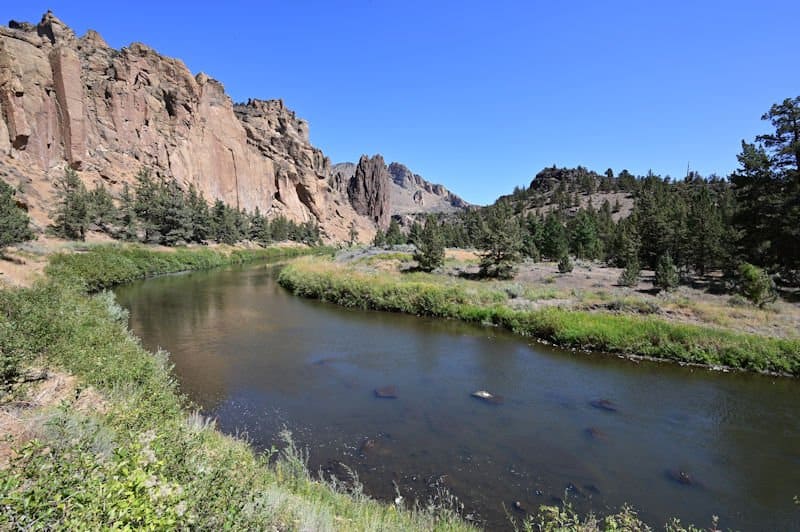 From our friend Tim

Cabin fever got the best of me this week so I got out and braved the weather to wet a line in a couple of my favorite places. I also talked to some fishermen on the river and a few fly shops – It’s Sportsman Show week which always gets me excited for the days to come. Last year we were making plans for fishing Patagonia but with that in the rearview mirror (a trip like that and three weddings puts a dent in the wallet!) I’m looking forward to staying close to home and focusing on the great fishing we still have here in Oregon!

Lower Deschutes River – There are still a few steelhead being caught in the stretch between Warn Springs and Maupin. The fish being caught are mostly falling to guys fishing nymphs. I saw two fish on my feed that were caught around Maupin and both were in that 4 to 5 lb range. Trout fishing also continues to be good fishing nymphs and BWO’s in the afternoon or when the hatch occurs. It’s winter fishing so be ready for cold hands and feet. Take plenty of breaks and be very careful wading.

John Day River – Steelhead fishing is fair in the river from Cottonwood to Clarno. Guides are getting a fish or two for their clients most days. There is no pressure so if you go cover lots of water and you might find yourself a fish or two. The country is spectacular and you will be alone in it!

Metolius River – This is one of the rivers I hit this week. I got there way too early as it was 16 degrees so check the temps and get here around noon unless it’s going to be unseasonably warm. I nymph fished a couple of my favorite holes between Allingham and 99 bridge. Fishing was decent with 3 rainbows, a brown and 5 whitefish to the net. I switched rods and went in search of a big bull trout but all I got was some exercise. There has been decent BT fishing though as I talked to some anglers who had caught fish and had also scored earlier in the week. Large gaudy, articulated streamers are the go-to in white or white and black, brown or green.

Fall River – The fishing has been pretty steady with Euro-nymphing taking the lion’s share of the fish. Stick with small presentations and work the seams and undercut banks.

Prineville and Haystack Reservoirs – Trout fishing is holding up on both. Worms under a bobber or air injected and fished off the bottom are taking most fish. Stripping streamers works too.

Crooked River – This was the other river I fished this week. It was very cold outside and there was zero surface activity. I fished a two nymph Euro set up and slowly drifted my flies through the shallow bars. This is where all my fish came from. They were up in the shallower water probably because it was degree or two warmer. After a while I began to see the fish and I was able to drift my nymphs right to them. It was mostly a whitefish show but a few red band rainbows were mixed it. My buddy Gary caught a few fish but he was fishing the deeper seam edges and the fish just weren’t there. The river is low and clear, we were the only fishermen on the river all day. The air temp never got over 27 degrees and as I was pulling out at 5 pm a snowstorm hit. It was a long drive back to Happy Valley but I was glad to have gotten out and fished and shared the day with an old friend and my golden retriever Charlie.

Now it’s off to the Sportsman Show on Friday and Saturday and then to the Siletz on Sunday for a steelhead trip. Have great weekend everyone!

Bank anglers are catching some nice trout from the bank at Ochoco Reservoir, which also will get 100 brood trout last week.

Steelhead fishing on the Grande Ronde can be quite good in January and February when flows cooperate. Look for uncrowded conditions and lots of open water.

Steelhead fishing on the John Day has slowed due to high water and slow visibility. But steelhead continue to move upriver so keep an eye on water levels and be ready to water when levels start to drop.

Fishing conditions on the Umatilla continue to be good. Water levels increased this week and over 90 steelhead have been counted at Threemile Dam in the past three days. Steelhead anglers should focus on the lower sections of the river above and below Threemile Dam.

Most of Thief Valley Reservoir is ice-free and anglers can launch boats from the boat launch (though the dock is not in place).

Ice conditions and fishing have been good at Phillips and Wolf Creek reservoirs.

Ana Reservoir offers a unique fishing experience for hybrid bass throughout the winter. Fishing has been fair.

The best bet for the Klamath area continues to be native redband trout in the Klamath River. Check out the stretch between the Powerhouse and CA state line.

1 thought on “Central and Eastern Oregon Fishing Reports for February 7, 2020”