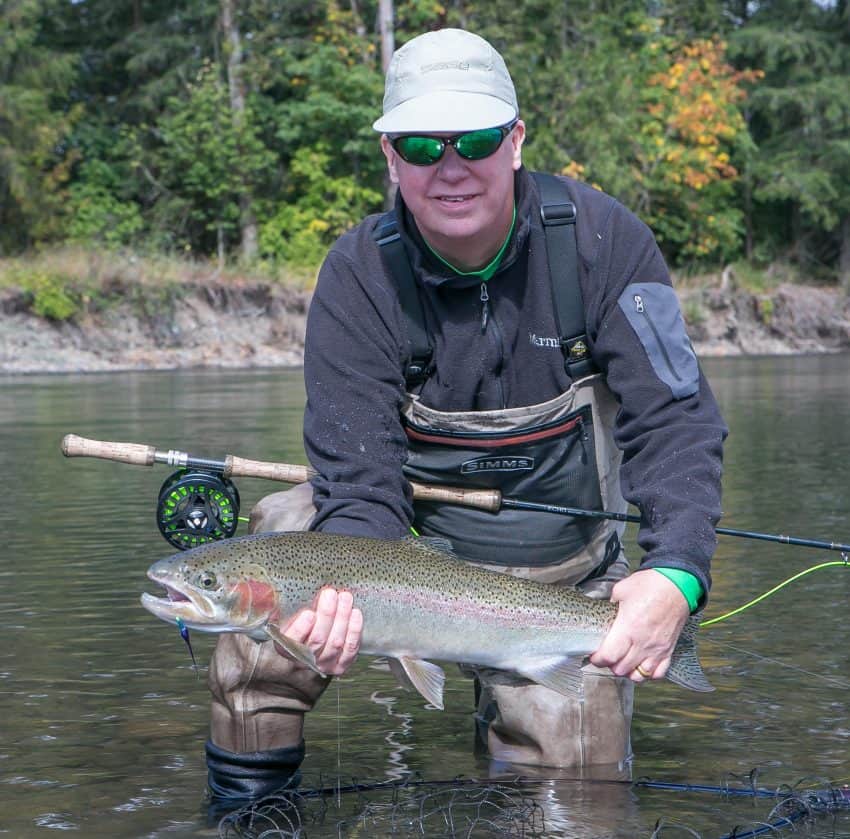 Lower Deschutes River:  The Lower Deschutes around Maupin is getting active.  Weather in this area will be reasonable, with a windy Friday, and temperatures warming after the weekend.  Baetis have been making a strong showing in recent weeks, but reports from yesterday are that the hatch was short-lived.  The Deschutes Angler Fly Shop in Maupin reports most Baetis are size 18-20, but there are times when bigger Baetis are present.

Anglers can fish blue wing olive (BWO) dries in the mid-day, particularly on the cloudy days.   There is some Skwala stone activity, and this will only increase during the latter half of March and into April.  Don’t forget to keep some Skwala nymphs in the box.  There is also some sporadic caddis activity – go with brown caddis (size 12 -14s) – and I would not hesitate to fish a caddis pupa in size 12 to 14s.

Midges are always present on the Deschutes in the spring – they are tiny and tricky to imitate accurately, but we do well using a tiny size 20 midge pattern – try a Griffiths gnat to start.

Euro nymphing, when hatches are not occurring (and even when a hatch is going) is super effective.  This style of fishing is almost like taking a vacuum cleaner to some runs, with Redsides and whitefish caught while using this technique.

Haystack Reservoir is fishing well along the edges.  If fly fishing, start with Balanced Leeches and Chironomid Pupa under an indicator. Walk and wade along the shoreline for success.  Gear guys are doing well.   As of today, the reservoir shows as 83% full, and the west side boat ramp is open.

Lake Billy Chinook is ramping up.  The Metolius Arm is open (tribal pass required), but there are some reports of slow fishing in this area.  For the next week or 10 days, consider the Deschutes Arm instead.

Crooked River:   Reports from the Crooked river have all been good.  The reservoir is at 42 percent full as of today; flows have been steady and likely to remain that way for some time.  Anglers and shops report that fishing overall is good.  There is a regular BWO hatch during the afternoons. When the hatch happens, emerger style patterns have been producing.  Go-to emerger patterns for this river include Klinkhammer and Film Critics.   When BWOs are in full flurry and rises are happening, hit them with Sparkle Duns.  Midday has been the best time to get into fish that are looking up.  Spend time at the sunny spots in the canyon where the water will heat up quicker than other areas.

When hatches are not happening, nymphing with a Flashback PT under a small indicator is catching fish.  Other hot flies on the Crooked come from Jeff Perrin at The Fly Fishers Place in Sisters, he recommends Zebra Midges, Perdigons, Scuds, and the Ray Charles.  He also likes the Knock Down Dun as a cripple pattern.

Midges are always consistent on the Crooked, particularly in the later afternoon…..think Griffiths Gnats or your favorite midge pattern.

Fall River:  Fall River has been good this week throughout the river from the headwaters on down including Camp Ground, Hatchery, Tubes and Falls. Caddis dry flies, specifically a large Peacock Caddis dry has been good.  The usual BWO cripple, sparkle duns, and emerger patterns are good bets on the Fall during this time of year.

Some of my own bigger fish on the Fall came from swinging a streamer.  Feeling the grab on a tight line swing is one of the exciting moments on the fall.  Swing your favorite streamer, but actively change out streamers to a different colors, types and sizes if fish have seen this streamer after several successive swings.   I now swing trout size intruder style flies.  The Fly Fishers Place suggest a Muddy Buddy Jig Streamer – thinking that this fly really looks alive.

Metolius River:  The Metolius River; jewel of the Cascades is finicky, difficult, but amazingly  beautiful.  This is the season when things start to happen besides an afternoon BWO hatch. The Cinygmula mayfly and caddis are active, I saw both yesterday. However, weather forecasts calling for below normal high temperatures and some possibilities of wintry mix showers going into the weekend in this area likely means it will be a BWO show.

Overall the Met has been fishing well with some fish, and plenty of other anglers during the day.  There are fewer anglers late in the day, and with the onset of Daylight Savings Time, this becomes a practical alternative. Reports are that the stretch below the hatchery is being hit the hardest….but the reality is there is plenty of water and I discover new locations that hold trout when the river is popular.   Anglers need to work a bit harder right now to find the fish, and do a lot of search style nymphing for your best success. Watch the eddies around midday for dry fly action.

Euro nymphing reports are quite promising.   I came to the river prepared to Euro nymph with a plan to target the deeper Redsides this week.  Perdigons were the fly for me.  I watched one angler between Allingham and Gorge go from refusals on dry flies to hookups within one cast when switching to his Euro nymph rod.

All of the migratory Lake Billy Chinook bull trout are back in the reservoir, but resident bulls are still present.   Bull Trout fishing has been good on Streamers. Once the juvenile chinook salmon get placed in the Met for the downstream migration through LBC on their way to the Pacific, the bulls predatory drive will kick in and they will be active.   Jeff Perin at The Flyfishers Place in Sisters reports color is less important than depth and presentation.  I second this.  My bull trout patterns are very different than those in fished by many other anglers on the river, but they are effective whenever I go out swinging flies for the day.

If you are fortunate enough to catch a bull trout, please keep-em-wet, releasing these precious predators unharmed and as quickly as possible.  Thanks much.

Suttle Lake:  Almost all of the ice is off, and there has been a boat on the lake on two different occasions, so early season fishing may be starting.  I have not found anyone who have been on the lake yet this year, so the boat siting’s are the only indicators that fishing is starting up.    I would start with jigs, suspended lures, and balance leeches together with chironomids.

And from frequent contributor Tim Moran:

Hello everyone!  Happy St. Pat’s Day to you all!  Seems like we are finally shaking off winter and heading into spring.  Yesterday’s weather was amazing and really puts me in the mood to start chasing fish! (Of course I have to put my boat back together first – new floor and anchor system, new seat mounts and I have to get through another knee surgery…but I digress…) The Century Drive lakes won’t be open for another 40 days, maybe a bit longer for Lava, Hosmer etc. as they are locked behind the “Snow Gate” but soon the High Lakes will be ready to go.  In the meantime, if lake fishing is what you’re into (and who isn’t) we have a great report from two of my favorite lakes, Lake Billy Chinook, and Prineville Reservoir.  We also have a report from the Metolius, Crooked and Deschutes rivers and a report of some excellent steelhead fishing in the far off northern corner of the state!  This last week the Central Oregon Sportsmen Show kicked off and although I wasn’t able to go,  there were lots of seminars, booths and great intel to be shared if you made it.  This region of our state is really chalk full of amazing lakes, rivers and ponds to fish and reminds me how lucky/blessed we are to live in such an amazing state! Now let’s get to it!!  Over on…

Prineville Reservoir  is producing great catches of big rainbow trout.  Trolling spoons, flashers with a smile blade/bead combo with a worm tipped hook or a F-5 or K-7 Flat/Kwik Fish are all working and several fish landed have been in the 17 to 20 inch class with a few bigger fish.  These fish are excellent table fare and are in prime shape. Bank fishermen are fishing near the dam and  floating worms off the bottom or under a float, Fishing Garlic Powerbait on a size 14 gold treble hook or pitching spoons and spinners on a slow retrieve.   Fish are in 15 to 23 feet of water so stack your boat rods accordingly until you find the depth.  The Prineville information isn’t that new as fishing has been good there all winter.  The big news is over on Lake Billy Chinook where March kicked off with some awesome Bull Trout fishing!  (If you were in the right place).  While most head to the Metolius arm in March, the big Bulls were busy chasing schools of kokanee near the surface in the Deschutes and Crooked arms. Several fishermen reported 20 + fish days throwing lipped crankbaits, jigging Buzz Bombs, trolling big jointed Rapalas and even fishing chunks of herring under a float. Even a few fly guys got into fish stripping or strip/kicking from kick boats with big black and white streamers with lots of flashabou.  My latest report (today) is fishing has slowed a bit but is still good in the Deschutes arm and slow in the Metolius arm, but this should change soon.  I also got a report from a TGF reader, who was kokanee fishing at LBC and tried several spots trolling, but had only a few fish for about 2.5 hours work.  They moved into the upper Metolius arm and found a school of willing biters and took limits of larger than usual kokanee vertical jigging.

The Metolius can be a little fickle this time of year.  The river above Allingham is closed until later in May to protect spawning trout and many trout do migrate to the upper river to do just that.  However, lots of trout still inhabit the river all the way to the reservoir so the Met is still worth fishing.  Rainbows and to a lesser extent Browns, will be susceptible to small nymphs either dragged along the bottom Euro-style or under an indicator. I like to fish caddis pupa, midges and pheasant tails in sizes 14,16 and 18.  The guys over at The Flyfisher’s Place in Sisters alway have a few local patterns that really work too so check with them for the latest pattern updates (541-549-3474).  There will be some  decent dry fly action on Blue WIng Olives, midges and caddis too and March Browns should be popping anytime now. There is also a small yellow Mayfly hatch that gets going there too so make sure your box is fully stocked.  Remember that all fish must be released unharmed and preferable left in the water.

The middle Deschutes has been high and off colored recently but a few browns in the 4lb range have been caught casting Rapalas.  The river should calm down soon and fishing the middle D will improve.  On the lower Deschutes, Amy over at Deschutes Angler (541-395-0995) reports great fishing a few days ago Euro-nymphing.  They caught several fish on a red midge and Amy’s Secret Blue Magic Fly ( coming to a vise near you).  The Shop is offering clinics, trips and tips on Euro-nymphing so contact them to learn this tactic and bring more fish to the net!  I think I’m going to set something up with them soon!

Well,  that’s the report for this week.  I can’t wait to get out and get after it!