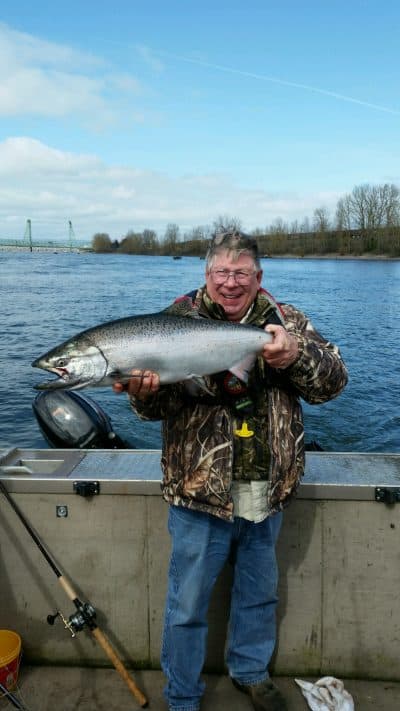 Columbia River Fishing Report – Although creel census shows that the Willamette has been the better spring Chinook option, the Columbia is starting to fire off and should produce improving catches over the next several weeks.

The creel check shows that anglers made 2,547 trips and caught 26 adult spring Chinook (kept) and 24 winter steelhead (released).  Based on preliminary VSI information (“Visual Stock Index”, where “snow bellies” are Willamette bound fish, and dark chinned Chinook are often upper Columbia River bound), lower river spring Chinook comprised 80% of the catch. In essence, Willamette bound fish are making up the vast majority of the Columbia catch at this time.

If you’ve already done the math, anglers are catching mainstem Columbia Chinook at a rate of about 1 keeper springer per 100 angler trips. Yea, it’s a lottery, but better odds for a highly prized spring Chinook than any lottery pay-out most people would get.

Reports from one guide fishing the lower reaches of the Columbia (downstream of Aldrich Point) were fair for mid-March. The guide reported only 6 boats fishing in the area he was in and although the two of them didn’t get any bites, they saw 3 fish landed, for a 50% success rate, which certainly isn’t bad for mid-March. They spent their time on anchor with plugs on the outgoing tide and stated that the fish they saw caught were all on plugs over the course of the tide. The creel census indicates that the bulk of the spring Chinook are being caught, from both the bank and boats, downstream of the Longview Bridge.

There have now been 5 adults spring Chinook pass Bonneville Dam as of March 15th. It has begun.

The Guide’s Forecast – Tides this weekend aren’t the most conducive for successful bank fishing. We look for the strong outgoing tides, of which they are only mediocre this weekend. None-the-less, the season is underway, mainstem Columbia Chinook are starting to show and more Willamette fish should be on their way.

Make no mistake, you’re still going to see less than impressive catch rates for a blossoming flotilla of boats in pursuit of our region’s most highly prized sport fish, but spring break is starting and nothing says spring Chinook (except for blooming dogwoods) than spring break, and on these beaches, you can easily adhere to social distancing guidelines between anglers.

There are some pretty great places to fish downstream of the Longview Bridge, but it’s also a long run from Portland, when you have the Willamette River in your back yard. It may make more sense to fish this area when more springers show up, closer to the supposed closure around April 4th.

Trolled herring will likely be one of the better options for boat anglers, targeting high tide if you can in these lower river areas. Don’t expect much action just yet upstream of the mouth of the Willamette, including Davis Bar, until we get into April. Sure, there will be people trying, but I think by now, most anglers have fished here enough to know what to expect. There will certainly be some lucky anglers this week however. It’s still not a bad strategy to fish plugs on anchor, it’s certainly a lot less labor intensive and likely as productive. There are great places to anchor fish throughout the lower Columbia this time of year, hopefully you have a few of your favorite hot spots lined out that you have confidence in.

Bank anglers should have a fair-at-best crack at a spring Chinook or wild steelhead along the beaches of the lower Columbia. Spin-n-glos are standard procedure here, but at the very least, liberally apply scent to your offerings. Anglers are come to rely on coon shrimp as an added bonus to their plunked gear. That’s certainly not a bad idea.

Although water velocities won’t be as intense as they are during a stronger tide series, fish will still be migrating close to the bank in these spring flows. Cooler temperatures will inspire them to stay close to shore versus the warmer temperatures during summer time, where Chinook will seek out deeper water. Pink, orange, green and purple should all put you in the game if you’re looking for the best colors of spin-n-glos for success.