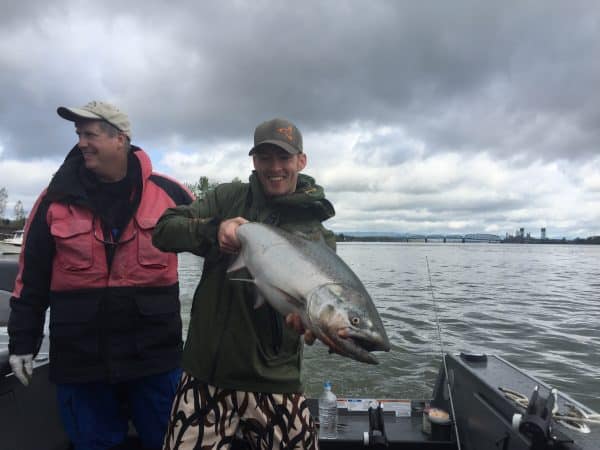 The Chinook season remains open above Bonneville and anglers do know how to harvest fish in this reach. It’s hard to say how long the season will remain open, but it’s definitely based on fishery performance. The downstream take could have an effect on upper river opportunity. Anglers will fish the mouths of the upstream tributaries and Pro Trollers working the main channel with spinners should also find some fairly consistent results as well. The season is just getting started upriver and just over 76,000 Chinook have already passed Bonneville Dam. We’ll spend some time talking about the upstream of Bonneville fishery in the coming weeks, but for now, we’ll be focusing our information for the lower reaches, which we know best.

The coho explosion hasn’t happened yet, but it feels as if we’re close. There have been some great days of opportunity, but “wild” coho make up the bulk of the catch. I’ve primarily been using bait and that has its disadvantages. Although it seems we get more bites with bait (fresh anchovies has been my choice), the strike to land ratio has been disgusting. It’s not uncommon to go through 4 pounds of anchovies for 5 – 9 keeper coho in a day. Those using spinners exclusively don’t get as many bites, but they do land more fish. But we’re still left with the hatchery/wild conundrum. As quick as they fall off, it’s tough not to net them before checking for the adipose fin, and then couple that with the seal and sea lion problem and it’s just not all that safe having your hands outside of the boat while trying to release a fish. Now back to our regularly scheduled program, the bite.

Until Thursday, most were putting forth their effort during the afternoon tide, and it was productive. The last hour of outgoing, the entire incoming and high tide has been good this week. It’s the same pattern you would expect for a typical salmon season. Fish low during low tide (Buoy 12, 14, 11 and Chinook wing jetties) and work your way upstream as the tide comes in. Doing the upstream troll on the Washington side of Desdemona Sands, hovering at Buoy 20, 22 or Hammond have all been productive. Unlike Chinook fishing, hovering at the bridge, either the Oregon or Washington sides, has not yielded much for results since we switched over to coho. Obviously, that could change at any time. On Tuesday, there was a 2 hour bite at Buoy 20 during the incoming tide that was impressive. It was just wave after wave of fish to take advantage of. Chinook are still in the system, hence, why we haven’t gone to a 3-fish bag limit just yet. With so many “wild” coho in the mix, a 3-fish bag limit seems a bit unattainable at this time. That should change soon however, a strong push of hatchery fish is imminent.

Trollers working both upstream and downstream of the bridge found good numbers of coho on Thursday morning. We’ll save the weekend’s predictions for the forecast however.

With all the coho in the river, few have been venturing out into the ocean. One of the last reports had ocean coho close to Buoy 2SJ and Buoy 2, just off the south tip of the jetty. That should still be the case as A-run coho are entering peak migration in the lower Columbia. It’s going to be a productive couple of weeks in Astoria.

Ocean and bay crabbing is picking up.

Albacore tuna fishing is good with some boats inching towards 40 to 50 fish days. Albacore are still grabbing clones, but cedar plugs and live bait, as well as jigging iron is producing respectable results.

Bottomfishing remains productive too, both along the south and sunken jetty and further south off of Cannon Beach and Arch Cape.

The Guide’s Forecast – With Chinook season closed downstream of Bonneville, and coho most willing to bite in the estuary, we’ll be focusing on the Buoy 10 fishery for the near future. Let’s start with the ocean fishery.

Lots of fish remain on the north of Falcon fishery, but with the numbers so robust in the estuary, why go anywhere else? Well, the Illwaco fleet is still going to the ocean, and the weather is looking quite nice for the weekend. It’s still a long ways out there when the fish are at our doorstep. Here is the ocean forecast:

With an early morning high tide, and a soft outgoing tide, it should be slam dunk fishing for the next several days. Again, follow the general rule, fish high at high tide, low and low tide. The caveat this weekend however is that the tide isn’t that strong so fishing higher up may not pan out like it usually does this time of year. But realistically, there are a LOT of coho in the estuary, and a LOT more yet to come in. In other words, they should be everywhere in the estuary this weekend, maybe even Tongue Point. Tongue Point however, will likely be loaded with Chinook as well. We need to leave those alone. There have been some epic coho bites at Tongue Point in year’s past, but mostly around mid-September. BONUS, you can keep coho jacks up there, and there has been a surprising number of those here too.

Starting at the bridge, either on the Washington or Oregon side is a good idea. I don’t see this often, but the Oregon side has been the more productive of the two this season, but that can also change on a daily basis. Early run “A” coho are largely destined for Oregon hatcheries, but that doesn’t seem to play a role on which side of the river these fish migrate up through the estuary. Troll your way downstream and plan on being westward of Hammond/Wing jetty 5 as we near low slack. The bite on the Buoy 10 line has been sporadic in recent days, and keep in mind that the best time to hover at Buoy 10 itself is when we have strong tides to vacuum them in from the ocean on both sides the river. That won’t necessarily happen this weekend.

With the weak outgoing tide, coho (and some Chinook) should continue to bite for most of the tide. Be prepared to let go a bunch of “wild” coho, but you’ll miss a ton of bites too so plan your bait needs accordingly. If you have confidence in spinners, you’re in good company this weekend. It’s a good choice and your strike to hook ratio will keep your bar bill reasonable versus using bait. I recommend spending most of your time between the Hammond/wing jetty 7 and Buoy 12/wing jetty 1. With so little movement in the tide, the fish won’t be going anywhere fast and your trolling speed should stay reasonable for a large part of the tide. Try and keep trolling speeds less than 4 mph.

Ocean crabbing should be excellent, but there are still a lot of soft-shelled crabs out there. Bay crabbing may be better for higher quality crab, but effort may be high this weekend too so watch where you place your pots and watch for snagged mooching rigs when retrieving.

Ocean bottomfishing may be a great option as well. Whether fishing along the south jetty or heading down to Cannon Beach/Arch Cape, weather conditions look favorable.

Don’t overlook tuna if that’s an option for you. Whether using iron or live bait, September is a great month for both. Weekend opportunities abound!