Do you want the good news, or the bad news? OK, bad news first.

How would you feel about DRASTIC AND DRACONIAN CUTS to hatchery production for spring Chinook, summer steelhead and rainbow trout in the Willamette River and Willamette Valley, courtesy of the US Army Corps of Engineers? Yeah, I thought so.

It’s still a reality folks, we have to fight for what we’ve paid for, what we’ve sacrificed for, and what we were promised. It’s a constant battle, and that’s why it’s important to be a member of an organization such as the Association of Northwest Steelheaders. This time, the US Army Corps is talking about cutting signature trout production in many Willamette Valley lakes by ONE THIRD! Trout fishing is considered a “gateway” fishery for Oregon’s anglers, often turning them into salmon and steelhead anglers and future conservationists. Is this the future we want for our children? They call it MITIGATION for a reason, Oregonians are OWED this, for the massive dam facilities that have KILLED the production of our wild trout and salmon in the region.

And summer steelhead in the North Santiam? GONE!

Spring Chinook? How about nearly HALVING the production, from 605,000 smolts to 360,000? Can you imagine making spring Chinook success half of what it is today? NO THANK YOU!

Don’t let this one slip by, critical decisions will be made by July 1st and the US Army Corps of Engineers hopes you’ll just let them slide by. Make these calls TODAY:

The message to the US Congressional offices would all be the same, they are on the same page as us so thank them, and ask them to continue to dog the US Army Corps of Engineers to meet their mitigation obligations. ”

Thank you for holding the US Army Corps of Engineers feet to the fire! They have a social and economic obligation to continue salmon, trout and steelhead production in the Willamette Basin. It’s critical to our communities, and our children that this opportunity is maintained, especially since the dams in the upper Willamette cut off wild production in our rivers and lakes!”

It’s a sad fact that we have to continue to fight this fight, but if we want to maintain our opportunity, a phone call from just a few concerned organizations isn’t going to get the job done!

Call NOW to SAVE OUR FISHERIES!

Our fisheries are in the state they are in because our policy-makers haven’t heard from enough of us. Organizations like the Association of Northwest Steelheaders, the NW Guides and Anglers Association, The Northwest Sportfishing Industry Association and the Coastal Conservation Association are always working on your behalf, but we can’t do this alone. We plead with you, make these calls and make a difference. NOW!

Are you mad now? You should be…

But, here’s the good news, hopefully we can get over the bad.

The Association of Northwest Steelheaders and members of the Northwest Guides and Anglers Association are hosting what we hope will be its first (of an) annual Summer Steelhead Camp! The camp will be an overnight excursion to an island on the lower Columbia River, complete with camp out and plunking trip for summer steelhead on June 29th and 30th. This may be the event of the summer, and will only cost adults $60 and children $40. We’ll camp under the stars and tell fish stories and learn about the great conservation programs the Steelheaders are involved in. Most important, we’ll provide an intimidation free fishing experience for beginners; women, children and men are all encouraged to come, especially FAMILIES! 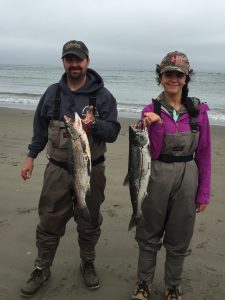 These clinics are a big hit, this overnight camping trip will be an even bigger hit, so register ASAP if you’re interested in learning (and hopefully catching) the summer steelhead of the lower Columbia River. More details are on our web site by clicking HERE!

COME HAVE FUN WITH THE STEELHEADERS!